Georgia election disaster condemned as result of deliberate GOP voter suppression: 'This is by design' 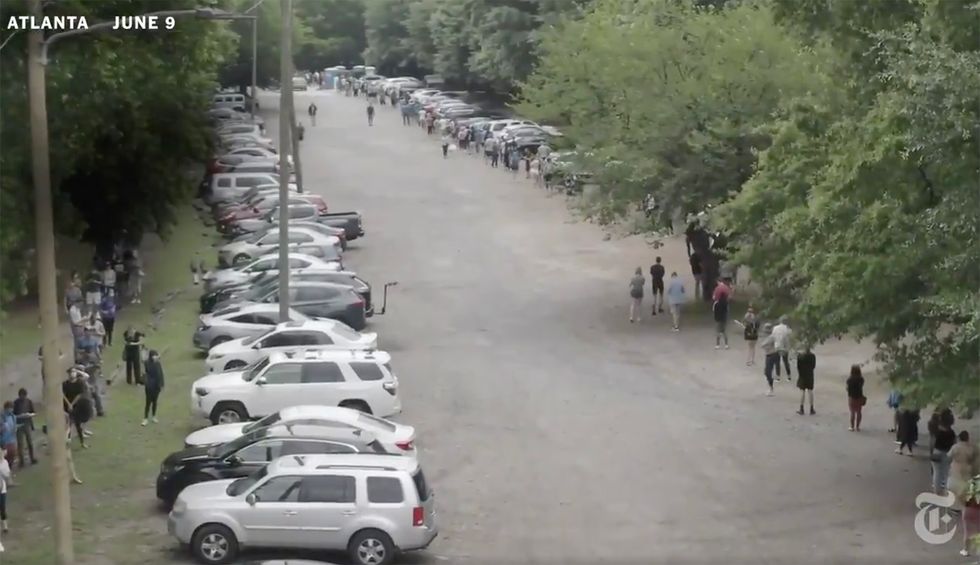 Photos of would-be Georgia voters standing—and, in some cases, sitting—in long lines after 11 pm to cast their ballots in the state's primary on Tuesday encapsulated what rights groups and lawmakers decried as a disastrous day for democracy and an entirely predictable result of years of deliberate voter suppression efforts by Republican lawmakers and the U.S. Supreme Court.

The coronavirus pandemic added another layer of hurdles, and provided Republicans with additional opportunities to limit ballot access.

"The ACLU warned that insufficient resources were allocated for polling places, machines, in-person election staff, and staff to process absentee ballots and that this would result in the disenfranchisement of voters in 2020," Andrea Young, executive director of the ACLU of Georgia, said in a statement. "It gives us no pleasure to be proven right."

"Whether it is incompetence or intentional voter suppression," Young added, "the result is the same—Georgians denied their rights as citizens in this democracy."

In response to drone footage showing long lines outside of a polling place in Atlanta, Rep. Alexandria Ocasio-Cortez (D-N.Y.) suggested it's more of the latter, writing, "This is by design, and it's their test run for November."

"Republicans don't want vote by mail because it chips away at their ability to do exactly this: target and disenfranchise black voters and people of color," Ocasio-Cortez wrote. "These scenes are specifically happening in black communities, not white ones."

Rep. Pramila Jayapal (D-Wash.), co-chair of the Congressional Progressive Caucus, echoed Ocasio-Cortez. "This is no accident," Jayapal said. "Black and brown people have been kept out of our elections—100% on purpose and by design. We must end racist voter suppression efforts, restore, and expand voting rights, and build a democracy that ensures every voice is heard."

As Ari Berman of Mother Jones noted late Tuesday, Georgia—which is poised to play a major role in the 2020 presidential election in November—"closed 214 polling places after the Supreme Court gutted the Voting Rights Act" in 2013.

"There were 80 fewer polling places for the June primary in metro Atlanta, where a majority of black voters live," Berman tweeted. "Mitch McConnell is blocking legislation passed by House Dems to restore the VRA."

Georgia's Republican Secretary of State Brad Raffensperger, who ignored repeated warnings that the state's new voting system would not be ready by 2020, was quick to point fingers at individual counties—particularly DeKalb and Fulton, which both have large black populations—for the voting problems, vowing to in a statement to launch an investigation to "determine what these counties need to do to resolve these issues before November's election."

Michael Thurmond, Chief Executive Officer of DeKalb County, fired back. "It is the Secretary of State's responsibility to train, prepare, and equip election staff throughout the state to ensure fair and equal access to the ballot box."

"Those Georgians who have been disenfranchised by the statewide chaos that has affected the voting system today in numerous DeKalb precincts and throughout the state of Georgia deserve answer," Thurmond added.

With the results of the statewide primary contests still rolling in, Common Cause Georgia executive director Aunna Dennis said in a statement that "the obstacles that Georgia's voters have faced in this election are simply unacceptable."

"It's also unacceptable that the officials entrusted with administering the elections have spent the day dodging blame, rather than accepting responsibility," said Dennis. "Today's problems were avoidable—and they disenfranchised voters. That must not be allowed to happen again."