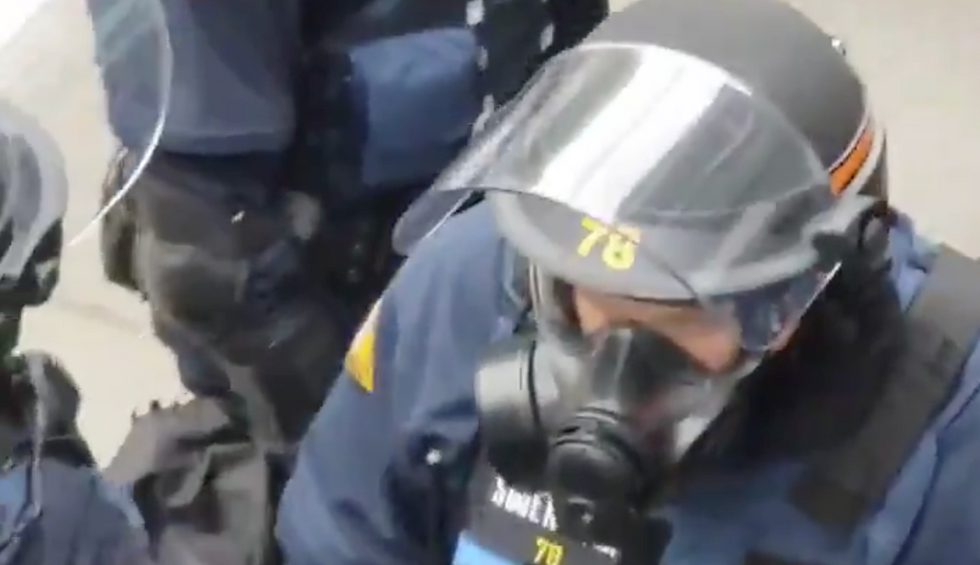 Krystal Marx, the executive director of Seattle Pride, shared a disturbing video this week revealing the violent message an officer in the Washington State Patrol gave to his team as it prepared to confront protesters.

"Don't kill them, but hit them hard," he said as he walked through a group of his colleagues.

“I remember shaking,” Marx told the Seattle Times of the experience filming the patrol from her office window. "Why not say, ‘Restrain them, calmly’?"

Chris Loftis, a spokesperson for the patrol, gave the Times a statement trying to explain away the comment as poor "word choice," but it was not reassuring:

He said officers were getting ready to conduct a “push technique” designed to force “aggressive, non-compliant, and threatening protesters away from a designated area. That type of physicality takes motivation and focus as well as balance and restraint. The team leader’s intent of motivating and reassuring his troopers was commendable but his word choice, especially when considered outside of the context of his team’s immediate challenges, was not.”

The statement added: “WSP is aware of the video and apologizes for the poor choice of words by one our team leaders preparing his troopers for a possibly confrontational situation. We hope the public will accept that apology and we ask for grace and understanding as our troopers are serving in tense situations of danger and difficulty.

“They are doing so with courage, commitment and compassion, but not always with perfection. As disappointed as we are that a word choice might obscure that work, we are proud of how our agency and others have worked to protect the rights of free speech and peaceful demonstration throughout this unprecedented period of statewide demonstrations.”

This attempt to explain the incident away should not be accepted. With his words, the officer was clearly encouraging brutal assault. We've witnessed brutal assaults by police on peaceful protesters and others across this country in recent days, and we've thus far seen far too little accountability.

By saying "don't kill them," his words clear suggest that force just short of lethal may be necessary. This is an extremely dangerous message. The claim that he's merely "motivating" the troopers for a difficult task doesn't make it any better; it simply underlines the peril of the remarks. He's potentially inciting them to extreme levels of violence, all with the authority of the state behind them. And the fact that the WSP isn't outright condemning the remarks and officer, and is instead making excuses, is an unsettling sign of what authorities find permissible.