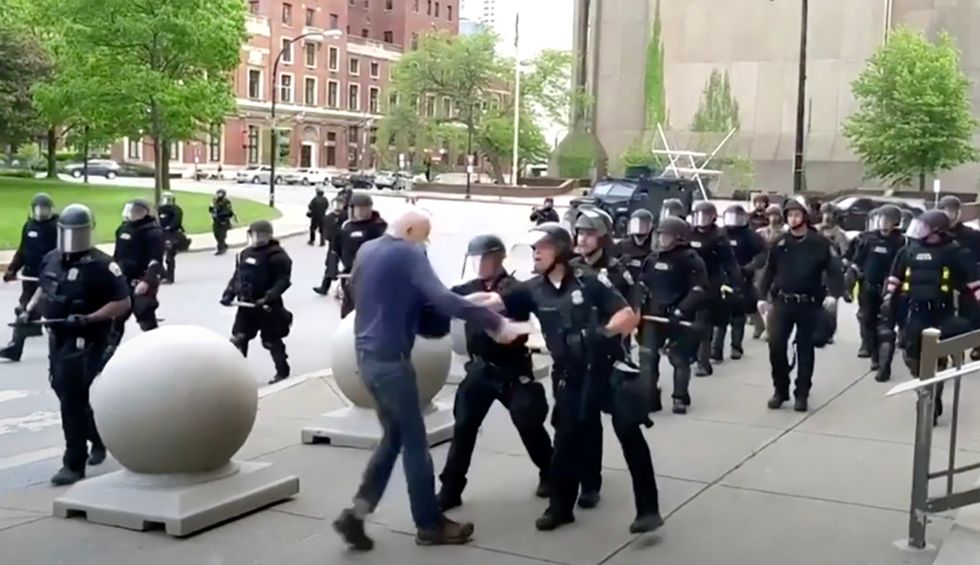 On Tuesday morning the President of the United States went after the 75-year old Buffalo man who was shoved by police last Thursday. In disturbing video Martin Gugino can be seen falling to the ground. The sound of his head hitting concrete is especially disconcerting. The cops left the scene without helping him and apparently without even calling 911 as blood could be seen coming out of Gugino’s ear.

“Buffalo protester shoved by Police could be an ANTIFA provocateur,” Trump tweeted. “75 year old Martin Gugino was pushed away after appearing to scan police communications in order to black out the equipment. @OANN I watched, he fell harder than was pushed. Was aiming scanner. Could be a set up?”

Martin Gugino, according to multiple news reports, is not a member of “ANTIFA,” but he is a “longtime peace activist” and human rights activist. His Twitter feed also shows he opposes Trump.

He is still hospitalized.

Jesuit priest and editor at large of the Catholic magazine America posted this over the weekend:

Many are outraged over the President’s remarks.

@realDonaldTrump @OANN I am actually shocked by the callous cruelty of this statement: President Trump is a horrible human being.
— David Rothschild (@David Rothschild) 1591706723.0

@realDonaldTrump @OANN To recap: The President is accusing a 75 year old man of conspire to being pushed by the pol… https://t.co/iyoqNPj1rB
— Morten Øverbye (@Morten Øverbye) 1591708187.0

@realDonaldTrump @OANN Trump's definition of ANTIFA is anyone who isn't a Trump supporter. That's just so he can c… https://t.co/b7GVqIsoxM
— Mrs. Krassenstein (@Mrs. Krassenstein) 1591706186.0

@realDonaldTrump @OANN Do you think the blood we saw come from his ear was fake? How did he convince those Buffalo… https://t.co/KOxc5sfv7K
— Helen Kennedy (@Helen Kennedy) 1591707175.0

@realDonaldTrump @OANN The President without any evidence accusing a victim of police brutality of being a member o… https://t.co/N3OWETuW3P
— Morten Øverbye (@Morten Øverbye) 1591706674.0

@realDonaldTrump @OANN The President of the United States calling the old man an Antifa provacateur when he was a v… https://t.co/mzTd8LVCQe
— Eugene Gu, MD (@Eugene Gu, MD) 1591706372.0