Defunding the police is popular, but you'd never know it from the headlines 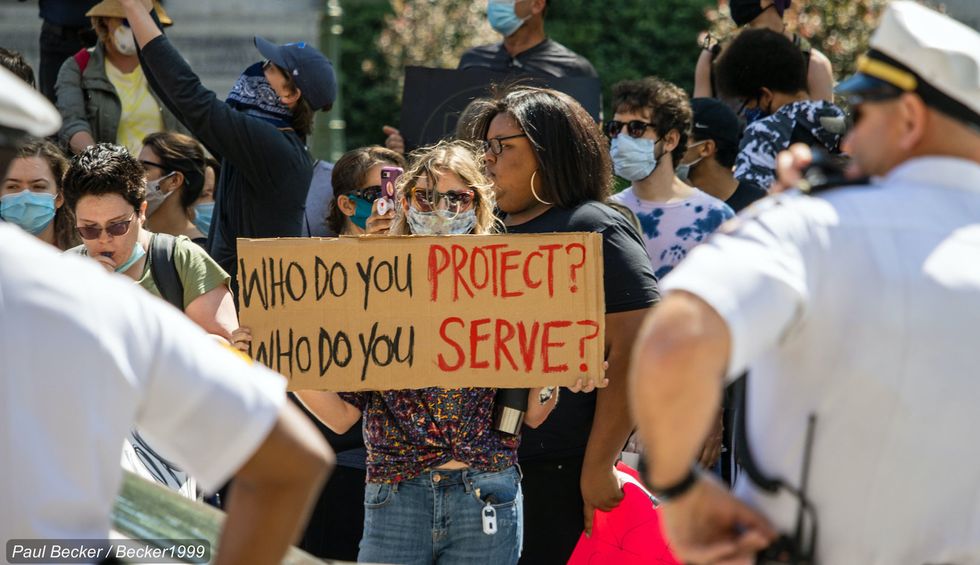 Several recent polls suggest that defunding police departments has little popular support. But the survey results vary widely according to how pollsters word the question. A deeper dive into the polling suggests that the more information respondents are given about what defunding the police actually entails, the more they like it.

It's true that when you ask people whether they favor the policy without any further information, they disapprove by wide margins. According to The Huffington Post, "the idea...is by far the least popular of the policies" they surveyed, and "is the only proposal opposed by more Americans than support it." In their poll, conducted with YouGov, only 27 percent of respondents supported it and 57 percent were opposed.

But when they asked about "budgeting less money for your local police department and more for social services (for instance, funding social workers and mental health professionals), they actually found plurality support, 44-41, for the proposal. Their headline was, "Most Americans Want Police Reform But Don’t Back ‘Defund The Police.'"

Similarly, Yahoo News found that "only a quarter of Americans (25%) support reducing police funding on its face." Yet when they asked, "Would you favor or oppose gradually redirecting police funding toward increasing the number of social workers, drug counselors, and mental health experts responsible for responding to non-violent emergencies" a different picture emerged. That wording gained the support of 49 percent of respondents versus only 30 percent who opposed it.

The most direct question was posed by Data for Progress. Instead of focusing on "defunding" the cops, they asked respondents about creating "a new agency of first-responders, like emergency medical services or firefighters, to deal with issues related to addiction or mental illness that need to be remedied but do not need police." Granted, that isn't the entire  agenda for defunding the police, which would also include housing the homeless, conflict mediation and community-based anti-violence work. But framing the question around a "new agency of first-responders," which is what San Francisco and other cities are setting up, is incredibly popular, with over 70 percent of respondents in favor and fewer than 20 percent opposed. That wording elicited majority support among Republicans, Democrats and independents and blacks, whites and Hispanics.

It's likely that when people only hear "defund the police," with no additional information, they worry about whether they'll have someone to call in an emergency. They get a sense that they'll lose something because that's typically what happens when we cut public spending. When you talk about diverting money from police agencies to social workers and mental health professionals, they like that idea better. And when you say explicitly that you would establish a new "agency of first-responders" who know how to manage various crises, they like that idea quite a lot. That's promising to give people something new and positive rather than calling for spending cuts.

It shouldn't come as a surprise that public opinion on this issue would be highly dependent on how pollsters pose the question.  Defunding the police was until recently seen as a radical idea and has only recently been thrust into the mainstream by this popular uprising against violent, racially discriminatory policing.

One could expect casual observers to be unsure of exactly what "defunding the police" mean as they're getting different cues from different sources. For example, under the headline, "Yes, We Mean Literally Abolish the Police,"  activist Mariame Kaba wrote for The New York Times, "People like me who want to abolish prisons and police... have a vision of a different society, built on cooperation instead of individualism, on mutual aid instead of self-preservation." Meanwhile, over at The Washington Post, Georgetown law professor Christy Lopez argued that, "for most proponents, 'defunding the police' does not mean zeroing out budgets for public safety, and police abolition does not mean that police will disappear overnight — or perhaps ever. Defunding the police means shrinking the scope of police responsibilities and shifting most of what government does to keep us safe to entities that are better equipped to meet that need."

But those views aren't in conflict. Kaba sees making the police "obsolete" as a longer-term project, and writes that, "regardless of your view on police power — whether you want to get rid of the police or simply to make them less violent — here’s an immediate demand we can all make: Cut the number of police in half and cut their budget in half." Nobody involved in this debate would simply abandon communities to their own devices.

There's been some debate on the broad left about the merits of calling to defund the police or using the language of "reform," which always tends to be popular. (I've argued that it's a false choice as "reform" can mean anything, including demilitarizing the police, slashing their budgets and standing up new non-police first responders.) But wherever you fall on that debate, the polling suggests that emphasizing the need to set up new agencies that are better suited to handle a host of problems that we now ask police to deal with is a smart way to address any ambivalence people may have about what would certainly be a significant structural change in how we protect our communities.