Coronavirus infections are surging in 20 states and Puerto Rico: report 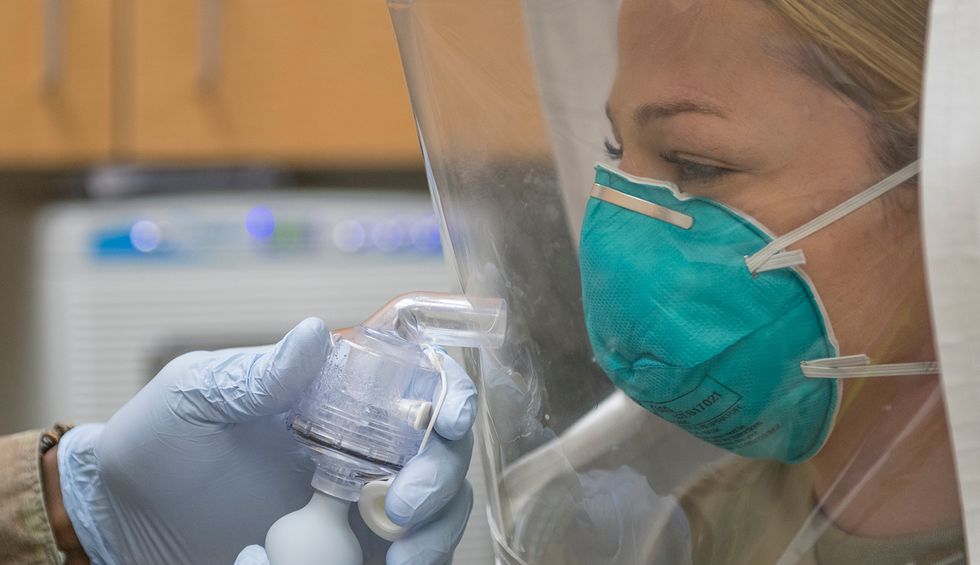 Staff Sgt. Beth Kenney, 56th Dental Squadron dental assistant, wears a N95 respirator mask while misted with a sensitivity and fit test solution April 1, 2020, at Luke Air Force Base, Ariz. The outer hood isolates the spray, and if the N95 mask is properly fitted, the individual wearing the mask will not smell or taste the solution. Bioenvironmental personnel are fitting masks to protect medical personnel from Coronavirus Disease 2019 so they can continue care for patients. (U.S. Air Force photo by Senior Airman Leala Marquez)
Alex Henderson
June 08, 2020

The May 25 killing of George Floyd has sparked so much outrage around the world that the coronavirus crisis hasn’t been dominating the headlines the way it previously did. But that doesn’t mean that the pandemic still isn’t a major threat in the U.S. and many other countries, and according to analysis from the New York Times, the number of COVID-19 cases has been on the rise in 20 states and Puerto Rico, a U.S. territory, in the last two weeks.

Those states, according to the Times, range from Sun Belt states (including California, Florida, New Mexico and Texas) to northern states such as Vermont, Oregon, Idaho, Missouri and Michigan. Much of the South, too is experiencing a surge, including Kentucky, Tennessee, South Carolina and North Carolina.

The Times, on Monday, noted: “Though the number of new deaths has been curving downward, the virus continues to circulate widely within the United States. As states move to partly reopen their economies, thousands of new cases are still being identified each day — and true normalcy remains a distant vision.”

Figures reported by researchers at Johns Hopkins University in Baltimore show how dangerous coronavirus continues to be. As of Monday afternoon, Hopkins was reporting that the death count from coronavirus had passed 110,700 in the U.S. and 404,300 worldwide. Brazil, according to the university, has become a leading COVID-19 hotspot. With more than 36,450 deaths, Brazil now has the world’s third-highest COVID-19 death count.