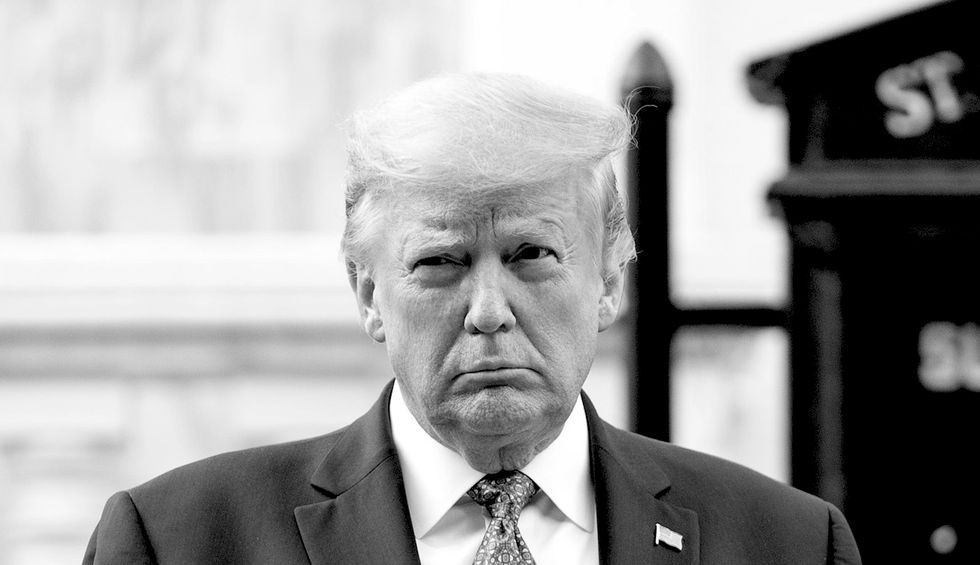 Whatever the specifics of what Donald Trump's diagnosis may be, from the moment protesters started to hit the streets to denounce police brutality, one thing was certain: The president's brainworms would direct his energies away from doing anything useful and toward the task of managing his ego, relying on the reality TV tricks he mistakes for the real work of presidenting.

And so, while demonstrations began to spread and police engaged in ruthless attacks on nonviolent protesters, Americans have been subjected to Trump trying — feebly, but at great cost to both taxpayers and public safety — to assuage his ego by demanding that his real life display of weenie-ness be "fixed" with reshoots and post-production edits.

Everything goes back to the original narcissistic injury from the past weekend: The "Bunker Boy" meme.

On Saturday, a group of protesters managed to tear down one of the barricades around the White House and, in response, the lights were turned off at the White House and Trump was reportedly hustled into an underground bunker by the Secret Service. This was shortly after Trump had tried to play-act the tough guy by tweeting lurid fantasies about how any protesters who breached the White House grounds would be "greeted with the most vicious dogs, and most ominous weapons, I have ever seen."

That the Secret Service takes precautions to protect the president in a time of chaos is, in itself, to be expected. But the contrast between Trump's chest-thumping and the fact that he was cowering in the basement was objectively funny.  Unsurprisingly, a lot of people made fun of him, and he didn't like it.

Both on social media and in protest signs, people called him "Bunker Boy" and contrasted Trump's hiding with the behavior of former Vice President Joe Biden, who went out in the streets to talk to protesters instead of hiding from them.

It's no exaggeration to say that everything that Trump has done since then has been a pathetic effort to nuh-uh the hecklers and prove that he's no #BunkerBoy, but a big, tough guy who will totally kick your ass without breaking a sweat. He'll shove the White House doctor out to tell some more lies about Trump's health, if that's what it takes.

What Trump did on Monday has been well documented. That was when he made federal police tear-gas a crowd of peaceful protesters so that he could stage a photo-op in which he strode across Lafayette Square to St. John's Episcopal Church and in front of its boarded-up doors, clutching a Bible. The decision to risk mass injury to civilians for a moronic campaign ad has generated a ton of outrage, but what takes the whole situation to the next level is that Trump clearly did because he was sick of people calling him a weenie for hiding in the bunker and thought this photo-op would make him look tough and majestic.

He did not, of course, look tough or majestic. He stood awkwardly in front of the church, wielding a Bible in a manner that suggested he had heard books described but never previously seen one. Meanwhile, the headlines and CNN chyrons informed the public that he had literally tear-gassed a crowd in order to walk across the square, underscoring what a massive chickens**t he is.

Even Richard Nixon, to whom Trump likes to compares himself to, was occasionally willing to venture out into crowds of protesters to talk to them. Trump, however, is such a wuss that he made his cadre of protectors tear-gas people rather than subject himself to a crowd's insults. Far from proving he was a tough guy, Trump's actions only led to another round of taunting about his wimpiness.

Why did the chicken cross the road? So he could tear gas young peaceful protesters and get a photo-op with a book he's never read.
— David Rock (@David Rock) 1591054720

Trump is clearly incapable of learning the central lesson from this — which is that acting defensive always makes people laugh at you even harder. This is demonstrated by his refusal to let the whole thing drop. He keeps trying to defuse the "Bunker Boy" meme and the Lafayette Square debacle, and keeps making it worse.

On Tuesday, Trump attempted a re-do of the failed church photo-op, dragging the sullen-looking Melania Trump with him to the Saint John Paul II National Shrine for a public appearance that looked like a scene from a horror film. Washington Archbishop Wilton Gregory broke with church protocol to criticize the visit, saying it was "baffling and reprehensible that any Catholic facility would allow itself to be so egregiously misused and manipulated," adding that the late Pope John Paul II would not have condoned "the use of tear gas and other deterrents to silence, scatter or intimidate ... for a photo opportunity in front of a place of worship and peace."

Trump was caught on tape during the visit apparently telling his wife to "smile" (she briefly complied, but then spent the rest of the visit looking like a hostage) and then generating images that are terrifying, but not for the reasons the president may have hoped.

These fumbling efforts to make "Bunker Boy" go away and frame himself as a tough but pious American leader-man unafraid to handle the current moment kept going on Wednesday. That was when Trump, clearly still smarting from all the mockery, tried to claim that he had not hunkered down in the bunker at all.

"I was there for a tiny, short little period of time," Trump told Fox News host Brian Kilmeade, claiming he was not there for safety, but rather for an "inspection."

It just so happened, Trump claimed that security "said it would be a good time to go down" to the bunker for the "inspecting factor" at the very same time that protesters just so happened to be tearing down the barricades. Interesting!

That lie is so transparent that it's remarkable that even Donald Trump would think anyone would buy it. Then again, Trump has spent his entire life surrounded by people who nod and smile and agree with whatever dumb stuff he says, because they want money or power. That's only gotten worse since he became our so-called president.

Meanwhile, Bunker Boy is bunking up his bunker even more, so he can hunker more better.

It's been said a million times before, but it's important to understand how much being the host on "The Apprentice" warped Trump's already deeply disturbed mind. Trump is an imbecile and a failed businessman, but through the power of editing — apparently a mind-boggling amount of editing, considering how little they had to work with — the producers of "The Apprentice" were able to make him look somewhere close to a competent and credible businessman.

For a lazy narcissist like Trump, that must have been a life-altering realization: Hollywood fakery can make even the biggest idiot appear smart and capable. So he has spent the entire presidency, which he thinks of more as a fake TV job than a real one, using photo-ops, pep rallies and other stunts to try to shape an image of himself as sharp and tough, an image that runs totally counter to reality.

This week amply demonstrated what Trump doesn't understand: You can't do reshoots and edits on the real world. Or as a great president to whom Trump often laughably compares himself, observed, you can't fool all of the people all of the time.

On "The Apprentice," failed efforts to make Trump look good were simply deleted and reshot, until something was captured that the tireless video editors could bang into something passable.

But Trump's bunker-hunker on Saturday, made worse by his cruel and stupid Lafayette Square photo-op on Monday, are just out there in the real world. There is no way to fling the footage into the Trash folder, or to edit the crap out of it until it sends the "right" message. Trump's continued demands that the world act like a reality-show producer who can keep giving him mulligans only reaffirms that he is, above all things, a narcissistic moron.

The weirdest part about all this is that none of it makes any difference. Trump may think his followers are bamboozled into believing he's a great man because of his production values, but that's really not true. They'll back him all the way because they share his reactionary views and feel he's a useful tool to push America into fascism, not because they mistook him for someone who is either brave or noble.

Trump could sit on live TV, peeing his pants and whimpering that the protesters are coming for him, and his base would stick by him and claim to see courage in the urine puddles below his chair, just so long as he keeps the racism and the lib-triggering coming. They know he's a "Bunker Boy," but will pretend they don't see it until the bitter end.