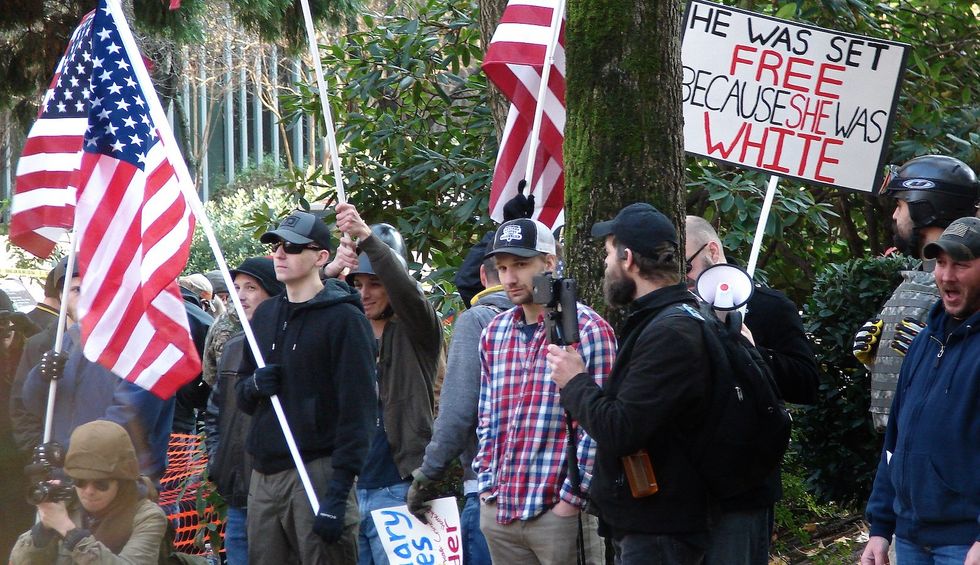 With his tweet suggesting that Martin Gugino, the 75-year-old man who was violently shoved to the ground by Buffalo police during a protest last week, may have been an antifa super-ninja, Trump's ooga-booga about anti-fascist activists descended into farce. And he isn't alone. Locals on the Olympic Peninsula in Washington state terrorized a multiracial family of four who were just out for a nice camping trip because they decided they were antifa activists. The Verge reports that "mythical buses full of bloodthirsty antifa protesters are causing panic in rural counties throughout the country," leading small towns to board up shop windows and shut down their main streets. And this week, the Turkish regime under Recep Erdoğan blamed the Kurdistan Workers Party for training antifa units to commit acts of violence in the United States.

The reality, as you may know if you're not a Fox News fan, is that while there are some local organized antifa groups, antifa is a philosophy, and a loose network of activists, rather than an organization. In its current iteration in the US, the movement arose from the punk scene, and some antifa activists engage in street fights with the Proud Boys and similar far-right groups. There has long been a debate on the left about the utility of those tactics (which I've written about).

But one thing that many mainstream commenters don't acknowledge is that most antifa activism has nothing to do with physical confrontation. As Caroline Orr wrote at Medium, "antifascist activity is incredibly diverse, encompassing everything from journalism, developing educational materials, and writing protest songs, to infiltrating far-right extremist groups and subverting them from within."

They also have a long history of organizing successful efforts to curb neo-Nazi recruitment and stop them from infiltrating spaces like the punk rock scene. More recently, they’ve taken on the scourge of online radicalization by getting far-right extremists kicked off platforms like Twitter, Facebook, and YouTube.

It's that last part that is so infuriating to the right. Many anti-fascist activists, whether or not they identify as such, do their work from behind a keyboard. They're basically online sleuths, who scour the fever swamps of the internet, try to identify anonymous members of extremist groups and expose them.

The point is to attach professional and social costs to membership in white supremacist, neo-Nazi and similar organizations. Whenever you read about a cop or schoolteacher being fired or a service member being discharged from the military for being affiliated with far-right groups, or for abhorrent expressions of racism or homophobia or antisemitism, an anti-fascist probably brought those activities to light. (Reasonable people can debate the ethics of "doxxing," which is a tactic that can be turned against anyone.)

While conservatives are obviously engaging in some ridiculous fear-mongering about hordes of bloodthirsty antifa rioters to delegitimize the Black Lives Matter protests sweeping the country and to distract from Trump's many miserable failures, there's more to it than that. For years, many on the right--including mainstream conservatives--have embraced the idea that freedom of speech includes the freedom from facing any consequences for offensive speech. The First Amendment, in their formulation, doesn't just constrain the government from punishing people for expressing their views. It should also prevent people from being fired by their employers, businesses from being boycotted and writers and artists from losing their perches.

Just last week, for example, there was widespread outrage on the right when Andrew Sullivan, who has a long history of offering inflammatory takes on race, revealed that NY Magazine wouldn't publish a column on the George Floyd protests and that his writings on these issue would receive extra scrutiny by the magazine's editors going forward. The New York Post was one of many conservative publications to characterize what was a routine editorial decision as "censorship."

Some antifa activists have committed acts of vandalism and bloodied some noses of far-right goons. They've made what many see as tactical errors at times. Most tend to play the media relations game poorly, and some have assaulted the wrong targets.

But they have also decimated the alt-right--the less extreme version of more hardcore fascist groups--by making it hard to be a member without one's neighbors and employers finding out about it. And that's what many on the right really find so terrifying.