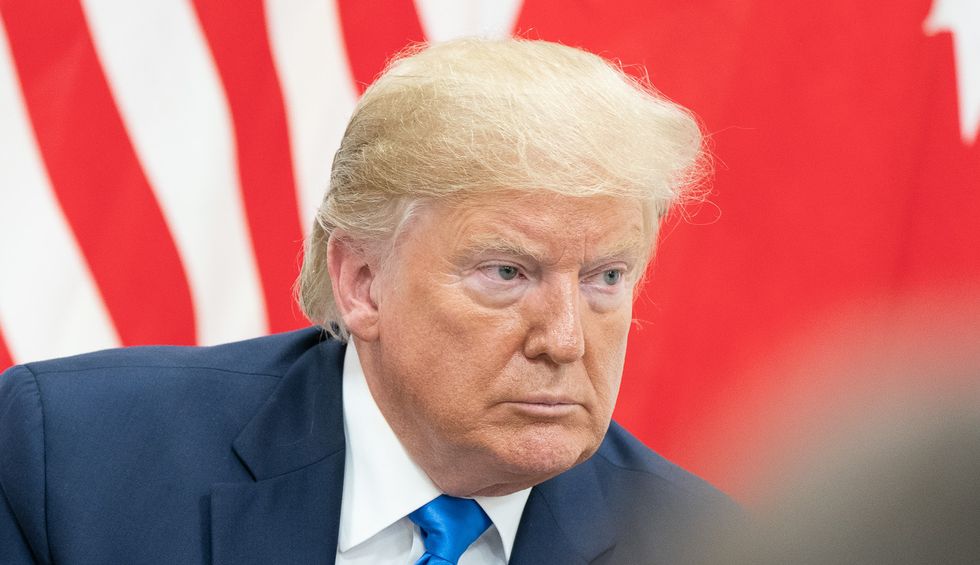 Editor's Note: This essay accurately quotes a Mississippi politician's speech in 1963, which includes a racial slur.

Last week we learned that someone with a deep knowledge of a certain kind of history seems to be advising Donald Trump’s reelection campaign. The campaign announced that Trump’s first post-COVID-19-lockdown campaign rally would take place on June 19, in Tulsa, Oklahoma. Immediately, commentators observed that Tulsa was the site of American history’s most harrowing racial pogrom in 1921, and that June 19 was Juneteenth, a holiday commemorating the day slaves in Texas learned they were free. The campaign decided to move the rally to the next day instead.

It was easy, perhaps, to imagine all this was a one-off coincidence, “snowflake” liberals manufacturing outrage out of thin air—until the announcement that Trump’s acceptance speech was to take place in Jacksonville, Florida, on August 27. It was soon pointed out that black people in Jacksonville know that date as “Ax Handle Saturday,” when participants in a 1960 NAACP demonstration were chased through downtown streets for beatings. Next, the campaign tweeted a frightening message about Trump World’s latest boogeyman, ANTIFA—illustrated with the same upside-down red triangle the Nazis forced socialists to wear.

“This campaign is nothing but a dog whistle,” a friend emailed me, referring to the phrase used to describe the longstanding right-wing practice of signifying solidarity with racists by sending signals on coded frequencies that non-racist voters won’t recognize. The comparison most frequently drawn is to the first major speech of Ronald Reagan’s presidential general election campaign, on August 2, 1980, at the Neshoba County Fair in Mississippi.

There, in the 1950s and ‘60s, politicians competed to outdo each other with nasty imprecations at civil rights organizations like the NAACP—an acronym a politician named Paul Johnson said—in his successful 1963 run for governor—stood for “Niggers, Apes, Alligators, Coons, and Possums.” In 1964, the fair opened as planned on August 8, even though six days earlier the bodies of voting rights activists James Chaney, Andrew Goodman and Mickey Schwerner were discovered buried in an earthen dam a few miles away, assassinated by the Ku Klux Klan with the assistance of Sheriff Lawrence Rainey.

And yet Reagan raised the curtain of his campaign there with a speech in which he affirmed his support for “states rights,” the signature code phrase of Southern racist politicians going all the way back to John C. Calhoun. Three months later, he swept all the Southern states save Georgia against Peachtree State native son Jimmy Carter.

But my work suggests a contrary lesson: it’s likely that this speech hurt Reagan more than it helped him. In 1964 Barry Goldwater, after voting against the landmark 1964 civil rights act, got 87 percent of Mississippi’s vote. In 1976 Gerald Ford, who first supported, then voted against civil rights legislation, and whose Republican Party by 1976 was widely understood as anti-civil rights, lost Mississippi by only two points. But in 1980 Ronald Reagan, who had opposed all the civil rights bills of the 1960s, barely won Mississippi, improving on Ford’s performance there by only one percentage point.

Why? Return to that hot August day in Mississippi. Listen to the speech, which is available on YouTube. Of the scores I’ve listened to, this is perhaps the most diffident Reagan performance I’ve heard. He took less than ten minutes, an unusually large portion comprised of stories and jokes which went over much better than his most famous line, which he rushed and muffled, as if he was nervous—far from the sort of demagogic bray you’d expect reading accounts of the event.

According to unpublished research by historian Marcus Witcher of the University of Central Arkansas, the infamous words were added at the last-minute by the private suggestion of Reagan’s host, Congressman Trent Lott. That makes sense because, in fact, the phrase contradicted the campaign’s central messaging strategy.

Documents I’ve studied reveal a campaign veritably obsessed with fighting the perception that Reagan’s conservative, anti-government politics camouflaged prejudice. A 1978 memo from Reagan advisor Peter Hannaford to Edwin Meese, for example, concerning “SUBJECT: ‘gay issues, revisited,’” observed “a very thin line to tread between getting the support of fundamentalists, on the one hand, and people who need to know how strongly RR is opposed to bigotry, on the other. The latter, in my opinion, are much more potent politically and in terms of swaying the opinions of others.”

That spirit carried forward through 1980. Reagan pollster Richard Wirthlin devised a strategy for Reagan to appear as often as possible before black audiences. “We weren’t expecting to pick up any black votes in New York,” an advisor later noted. “We just wanted to show moderates and liberals that Reagan wasn’t anti-black.”

The same message even held for white Mississippians. 1980 was well into the ascendancy of what historians like Matt Lassiter call “colorblind conservatism”: advocating policies that disparately impact African Americans, without appearing to do so.

Indeed, one of this story’s strange ironies is that the campaign was originally planned to open before the Urban League—a venerable national civil rights organization. A scheduling problem resulted in the Neshoba speech coming first.

It’s not that the campaign did not seek to appeal to bigots; one 1979 Wirthlin memo said the most promising potential seam of Reagan voters were Democrats scoring highest on “authoritarianism—and a low score on egalitarianism.” And it wasn’t only Ronald Reagan’s general election campaign that opened in a racist epicenter. His nomination campaign did as well, in South Boston, site of vicious violence against integrating black students only five years earlier. Beside him on the podium was a politician named Albert “Dapper” O’Neil, an anti-integration leader famous for never going anywhere without a gun, and for his adamant support for South Africa’s apartheid government.

Next Reagan traveled to Cicero, the Chicago suburb so inhospitable to black people that Martin Luther King once gave up on a plan to march there for open housing after the Cook County sheriff told him it was “awfully close to a suicidal act.” Reagan’s briefing materials instructed him that that a top issue of voter concern there was a “recent HEW [Department of Health, Education and Welfare] decision to force a busing program on the city of Chicago and surrounding suburbs.”

He delivered his standard speech in Cicero and “Southie,” mentioning nothing about busing, just government overreach in the abstract. The campaign was skillfully treading that “thin line” described by Hannaford. Had he also delivered his standard speech in Neshoba nine months later, he would have done so again. Instead, he stepped over the line, taking Trent Lott’s advice—and his endorsement of “states rights” turned the dog whistle into a train whistle.

His diffident delivery suggests Reagan understood how risky this was. If so, his suspicions were correct. It was the immediate conclusion of voices across the political spectrum that this was a terrible blunder.

Carter joined seven southern governors in demanding an apology—skillfully playing to Southern political tropes by portraying Reagan as an unwelcome carpetbagger. Andrew Young penned a moving essay for the Washington Post about stopping in Neshoba County during Martin Luther King’s 1966 March Against Fear. King described the lynching in his speech, concluding, “The murderers of Goodman, Chaney, and Schwerner are no doubt within range of my voice.’  A voice rang out: ‘Yeah, damn right. We’re right behind you.”

The Reagan campaign had begun on its back foot—not least in Mississippi. Witcher unearthed a report on the ground from a party worker there: “Three weeks ago Reagan had a landslide victory in Mississippi. Today it is a tossup.” The state Republican chairman listed the campaign’s liabilities—writing “states’ rights flap” at the top. At Reagan headquarters, the fallout was so great that the campaign brought in a ringer from a major Washington lobbying shop to handle press relations.

And, just the opposite of Donald Trump of late, the campaign doubled down in its outreach efforts toward liberal constituencies. This was something Ronald Reagan was rather skilled at. After the candidate met with National Organization for Women president Eleanor Smeal to affirm that he supported feminist goals, she emerged to tell the New York Times that Reagan was “finally waking up to the fact that this issue is a lot hotter than he realized,” repeating campaign talking points that he had supported fourteen civil rights bills as governor.

Meanwhile, black surrogates hymned Reagan’s praises: “for too long the Democratic Party has taken black people for granted and lied to them about Republicans.”

These efforts were so successful that, astonishingly, in the middle of October, none other than Ralph Abernathy stepped up to the pulpit of an African American church in Detroit, identified himself as “the man in whose arms Martin Luther King died,” and said, “I have been praying and I have been studying and today I have had an opportunity to come to a decision after a private meeting with Governor Reagan. And after we discussed certain issues, I am thoroughly convinced. . . . I endorse the candidacy of Ronald Reagan as the next president of the United States!”

Ronald Reagan had the skill to recover from a lapse in discipline when it came to treading the fine line of race. Compare that to the current Republican aspirants. Juneteenth? “Ax Handle Saturday”? Nazi symbols? Shithole countries, Mexico sending their rapists? Memo to Donald J. Trump: you’re no Ronald Reagan. Dog whistling takes skill, and your racism is far too blatant to walk that fine line.

Rick Perlstein is the author of The Invisible Bridge: The Fall of Nixon and the Rise of Reagan, Nixonland: The Rise of a President and the Fracturing of America, and Before the Storm: Barry Goldwater and the Unmaking of the American Consensus. His latest book, Reaganland: America's Right Turn, 1976-1980 will be released in August.