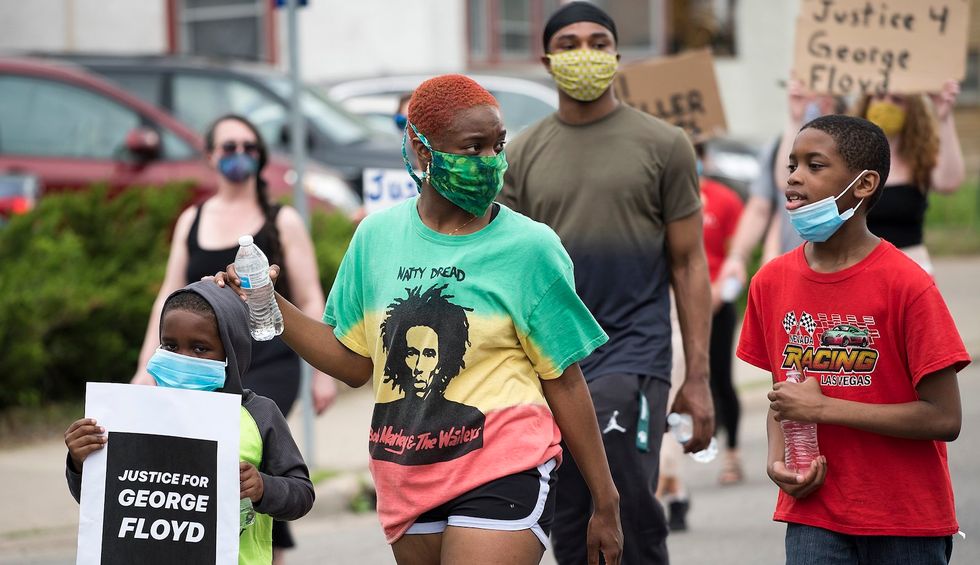 Conservative writer David French published a powerful essay this week with The Dispatch that gave a fascinating glimpse into how and why he has changed his mind about racism in the United States.

French, who previously wrote for the National Review, is a staunch opponent of President Donald Trump, but he isn't quite the MSNBC-style Never Trump figure that has become common these days. He vehemently defended the nomination and appointment of Brett Kavanaugh to the U.S. Supreme Court. He's argued in favor of voting for the Republican lawmakers that enable Trump in 2018, even while he advocates voting against the president. He remains sharply critical of Democrats and much of the progressive worldview.

All of which is to say he's not a conservative in name only. He's a true believer. But when it comes to racism, he thinks his ideological compatriots have it badly wrong.

He aptly explains why those on the right often dismiss calls from the Black Lives Matter movement and others to pay attention to racism:

They think, “How can it be that ‘the system is racist’ when I just left a corporate diversity training seminar, I work at an equal opportunity/affirmative action employer, my son’s college professors are constantly telling him to ‘check his privilege,’ and no one I know is a bigot? It seems to me that the most powerful actors in ‘the system’ are saying the same things—don’t be racist.”

Then, when you go online or turn on the television, you’re hardly persuaded to change your mind. If you’re conservative, chances are your social media feed is full of images of rioting and looting. There are viral videos (including one the president retweeted Saturday) that declare “George Floyd was not a good person” and “the fact that he has been held up as a martyr sickens me.” There is the constant repetition of statistics about black-on-black crime, and posts and pieces arguing that police racism and brutality are overblown are shared across the length and breadth of social media.

Even a well-meaning person subject to this barrage of messaging is then apt to look at clear racist injustices—like the murder of Ahmaud Arbery, where the killer allegedly used a racial slur after he fired the fatal shot—and say, “Sure, there are racists still in this world, but they’re not part of any ‘system’ I know.” Moreover, compounding the problem, those voices who are most loudly condemning American racism are also the voices he or she trusts the least on other issues—such as abortion, religious liberty, economics, or health care. Something in the conservative mind and heart rebels, I can’t join with them, can I?

He admitted that he used to be one of these people — someone who recoils at the mention of "systemic racism." The country, he thought, had moved past its racist history, even if some minority of racists remains.

So what changed his mind? He and his wife adopted a black daughter, Naomi, from Ethiopia. And as she grew up, he consistently noticed how she was treated differently in a wide range of circumstances when compared to his white daughter.

"[Some] of the incidents could have a benign explanation, but as they multiplied, and it was clear that Naomi’s experience was clearly different from her siblings, it became increasingly implausible that all the explanations were benign," he said.

And then the Trump campaign happened, and it got much worse. He and his family were subjected to wildly racist online harassment as a result of his opposition to Trump, harassment that often focused on the existence of his black daughter.

"The attacks got worse and some became overtly threatening, including posting image after image of dead and dying African-Americans in the comments section of my wife’s blog," he wrote. "Suddenly, my understanding that 'we’ve come so far' in American race relations was replaced by the shocking, personal realization that 'we’ve got so far to go.'"

French had previously criticized some conservatives' reactions to the killing of Trayvon Martin, which included an instinctive defense of police conduct. But once the Trump campaign and harassment began, he really saw how deeply ingrained racism is in the fabric of American life. And he realized that from the perspective of black Americans, racism may clearly be much worse than he or other conservatives believed.

Perceptively, French noted that he shouldn't have needed to have the experience of raising a black daughter to recognize what African-Americans go through every day. But since he did, he's trying to share it with other conservatives who haven't had that experience.

"A journey of a thousand miles continues step-by-step, and you don’t have to agree on the entire travel plan to put the next foot forward," he wrote. "Oh, and as we do it, be better than me. Remember, I had to change where I sat before I could change where I stood. If you first change where you stand, then the next generation will sit in a very different and better place."

One odd aspect of the piece, though, is his treatment of the idea of systemic racism. He provided a useful definition, which states in part: "A system in which public policies, institutional practices, cultural representations, and other norms work in various, often reinforcing ways to perpetuate racial group inequity."

But for the rest of the piece, he focuses on the kind of racism his daughter experienced that, from his description, appears to be interpersonal and explicit. It's the result of people displaying prejudice, bias, and malice toward her based on the color of her skin. This is kind of racism is indeed still rampant in the United States, even if we like to pretend otherwise, as French rightly argued. And though it plays a role in the perpetuation of systemic racism, it is a conceptually distinct phenomenon.

One reason this is important is that the existence of structural racism poses a much bigger threat to conservative ideology than other forms of racism. If structural racism is real, as it surely is, it demands sweeping and systematic efforts at reform and the promotion of equality. While some of these changes are amenable to the conservative ideology, many others are not. Grappling with the hard choices that this conflict can create may be a vexing problem for people like French.