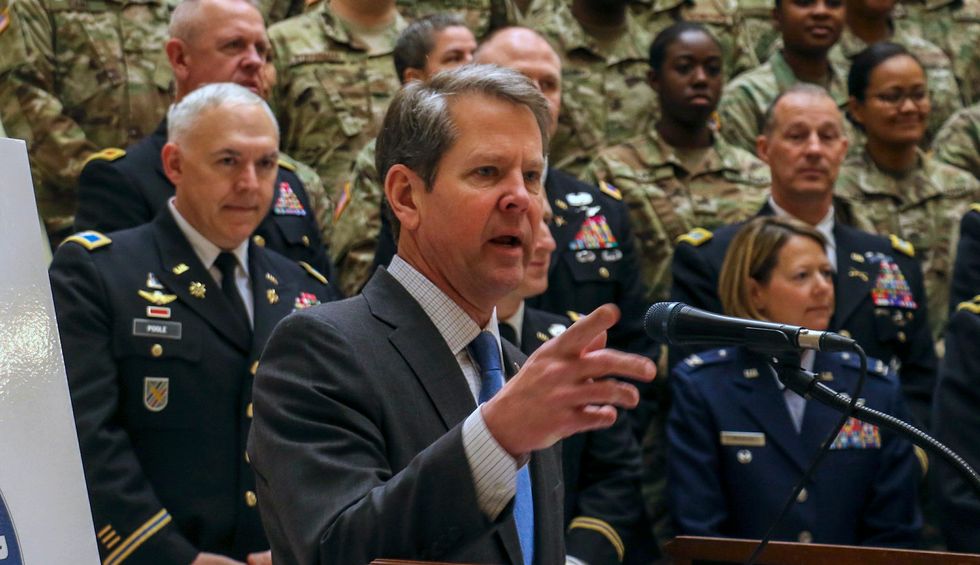 Governor Brian Kemp, 83rd Governor of Georgia, welcomed the Georgia National and Georgia State Defense Force to National Guard Day at the Georgia State Capitol, Atlanta on March 28, 2019. The celebration recognized the service of the men and women of the Georgia Guard who currently and previously served as well as their families. (U.S. Army National Guard photo by Spc. Tori Miller.)
Alex Henderson
May 04, 2020News & Politics

Far-right anti-shutdown protestors in different parts of the United States have described social distancing as something being forced upon states and municipalities in a heavy-handed, dictatorial way. But truth be told, there are many Americans who — rightly fearful of the deadly COVID-19 coronavirus — would voluntarily practice social distancing even without stay-at-home orders. And a perfect example is Georgia, where many businesses owners are rejecting Republican Gov. Brian Kemp’s call to reopen the state prematurely. One CEO has described the reopening of restaurants in Georgia as a “disaster” and a “worst-case scenario.”

Even President Donald Trump has said that Kemp has been too quick to reopen non-essential businesses such as nail salons and restaurants. Many brick-and-mortar businesses and consumers in Georgia, as articles published by CNN and Bisnow demonstrate, would clearly rather be safe than sorry.

Christina Maxouris, on CNN’s website, reports that the owners of “more than 120 of Georgia’s most popular restaurants” have announced that they “won't be reopening their doors just yet” even though Kemp has told them they can. And in a full-page ad taken out in the Atlanta Journal-Constitution, more than 50 Georgia-based restauranteurs announced their plan to stay closed for now and stated, “We pledge ourselves to act as custodians of the public’s trust…. Recognizing that each operator faces incredibly difficult decisions on the path ahead, we affirm the fact that public safety is the top priority as we navigate the challenge.”

If brick-and-mortar businesses reopen during the pandemic, that doesn’t necessarily mean that customers will show up. Journalist Jarred Schenke, in Bisnow, reports that some of the brick-and-mortar businesses that have reopened in Georgia are finding that business is terrible. Mario Zelaya, CEO of Bad Axe Throwing, told Bisnow, “That was the worst-case scenario, especially with all the marketing we did. The reopening weekend was a disaster. We had two customers all weekend.”

James O'Reilly, CEO of the Smokey Bones restaurant chain (which has restaurants in Georgia and Tennessee), told Bisnow that he doesn’t expect customers to come back in huge numbers. Smokey Bones, according to Bisnow, has reopened four of its locations to dine-in customers and is operating at 50% capacity.

“Dine-in business was the majority of our revenue,” O'Reilly told Bisnow. “We’re not expecting guests to flood back into our restaurants, but as they do come back in slowly, we want them to know the changes we made.”

In Georgia, over 1150 people have died from COVID-19, according to researchers at Johns Hopkins University in Baltimore.