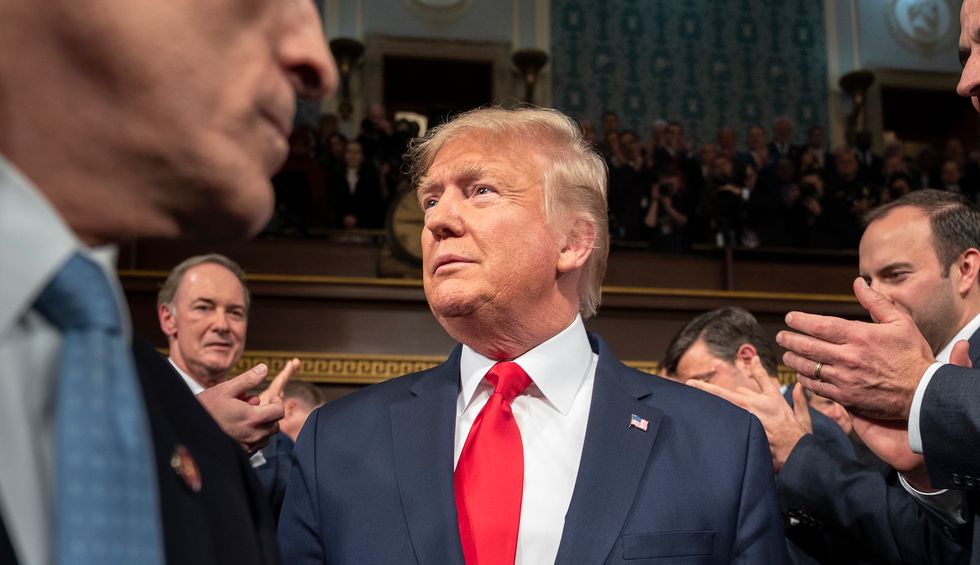 President Donald J. Trump arrives in the House chamber and is greeted by members of Congress prior to delivering his State of the Union address Tuesday, Feb. 4, at the U.S. Capitol in Washington, D.C. (Official White House Photo by Shealah Craighead)
Alex Henderson
May 13, 2020

Although GOP strategist and author Rick Wilson — one of President Donald Trump’s most outspoken critics on the right — has remained in the Republican Party and continued to hope for a post-Trump GOP, other Never Trump conservatives have given up on the GOP altogether. One of them is Washington Post opinion columnist Jennifer Rubin, who asserts in a piece this week that Never Trump has come to mean “Never Republican” for anti-Trump conservatives like herself.

“There once was a friendly debate among those who used the Never Trump moniker about whether the GOP could be ‘saved’ or was worth ‘saving,’” Rubin explains. “Early in the Trump presidency, if not before, I answered no; many who once spoke of reforming or reviving the party now have come around to the view it is hopeless.”

One prominent conservative who now shares that view, Rubin notes, is The Bulwark’s William Kristol, who she worked with when she was writing for the now-defunct Weekly Standard. In an interview with the Washington Post published earlier this week, Kristol lamented, “Trump’s been renominated, and liberating the party from Trump or Trumpism seems awfully far-fetched. Obviously, if he loses in November, things are in more flux.”

In her column, Rubin expresses her admiration for some GOP governors in northeastern states, including Maryland Gov. Larry Hogan and Massachusetts Gov. Charlie Baker. But Trumpism, according to Rubin, has so thoroughly infested most of the modern GOP that it is beyond salvation.

“I cannot speak for others, but the reason the Republican Party is not worth saving is that with few exceptions — e.g., Maryland Gov. Larry Hogan, Massachusetts Gov. Charlie Baker — its members have fully embraced Trump and Trumpism: a noxious brew of nationalism, contempt for truth, xenophobia and an ‘America First’ agenda,” Rubin writes. “Any of these would have sent me fleeing from the party; collectively, they make it impossible to return. Sadly, my feelings toward the spineless Republicans who blindly supported Trump, opposed impeachment, enabled his lies and attacks on institutions, and have not found the nerve — even in a pandemic — to take issue with his lies, impulsive reactions and dangerous preferences can be summed up in a single word: contempt.”

Rubin is among the many Never Trump conservatives who are delighted to see former Vice President Joe Biden become the presumptive Democratic presidential nominee. But she asserts that Trump is so terrible for the U.S. that she would have voted for a self-described democratic socialist, Sen. Bernie Sanders of Vermont, if necessary.

Rubin says of Biden, “He is no socialist. We can happily embrace him. I would have been prepared to crawl over broken glass to vote for anyone but Trump — yes, even Sen. Bernie Sanders (I-Vt.) — because of my conviction that Trump is a menace to democracy and now, a danger to our very lives. It would not have been a pleasant choice, and many Never Trumpers would not have joined me. Thankfully, we were spared the Sanders-vs.-Trump match-up.”

Rubin wraps up her column by stressing that at this point, she considers the centrist wing of the Democratic Party to be the best hope for a post-Trump America.

“Never Trumpers, now Never Republicans, should keep their eye on the extraordinary class of female freshmen House centrists: Reps. Abigail Spanberger, Mikie Sherrill, Elaine Luria and others,” Rubin writes. “A lot of those ex-Republicans might decide they are Abigail Spanberger Democrats."