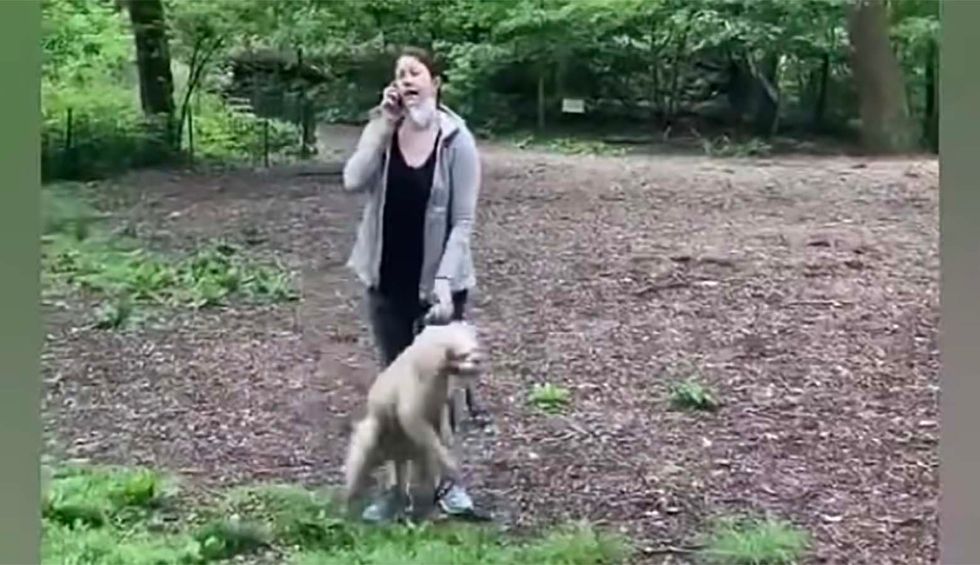 Image via Screengrab.
Laura Clawson
and
Daily Kos
May 26, 2020

Something like justice has been swift for one Amy Cooper of New York City after she responded to a simple request to leash her dog with a threat: She was going to call the police and “I'm going to tell them there's an African American man threatening my life.” We know how that story ends, and she very clearly did, too.

Amy Cooper has been placed on administrative leave at her job with investment firm Franklin Templeton and has had to surrender her rescue dog after the video showed her choking it as she yelled threats at birdwatcher Christian Cooper (no relation). She’s apologizing, but the apologies have been weak and the video is appalling.

“When I think about the police, I’m such a blessed person. I’ve come to realize especially today that I think of [the police] as a protection agency, and unfortunately, this has caused me to realize that there are so many people in this country that don’t have that luxury,” she continued. Except that she very obviously used the police as a threat against a Black man for the sin of asking her to follow the clearly posted rules of a public space.

When a white woman tells a Black man “I’m going to tell [the police] there’s an African American man threatening my life,” she knows what she’s doing. If Amy Cooper had really been so terrified, she would have called the police right away without pausing to issue threats first. If race hadn’t been a part of her pitch for why the police should care, she wouldn’t have wielded one description—“African American”—like a weapon throughout.

Christian Cooper is a science editor and bird watcher who has told reporters he frequently asks people to leash their dogs in Central Park’s Ramble so they don’t disturb birds and dig up the plants that are their habitat.

”That's important to us birders because we know that dogs won't be off leash at all and we can go there to see the ground-dwelling birds,” he told CNN. “People spend a lot of money and time planting in those areas as well. Nothing grows in a dog run for a reason.”

After he asked Amy Cooper to leash her dog—he says he was “pretty calm”; she says he was screaming; one of these accounts is more believable than the other based on the video—he took out dog treats he carries precisely because dog owners don’t want a stranger feeding their dogs and will usually put a leash on when the treats come out. That’s the point at which Amy Cooper took out her phone and, it cannot be emphasized enough, didn’t immediately call the police but instead paused to make the explicit racial threat, “I'm going to tell them there's an African American man threatening my life.”

Christian Cooper stood his ground. “I can be racially intimidated and kowtow to her,” he told The Washington Post, but “I’m not going to participate in my own dehumanization.”

“We take these matters seriously, and we do not condone racism of any kind,” Amy Cooper’s employer, Franklin Templeton, said in a statement. “While we are in the process of investigating the situation, the employee involved has been put on administrative leave.”