Watch: Michigan sheriff and police didn't use harsh tactics to control Flint Township's protest — they laid down their batons and joined it 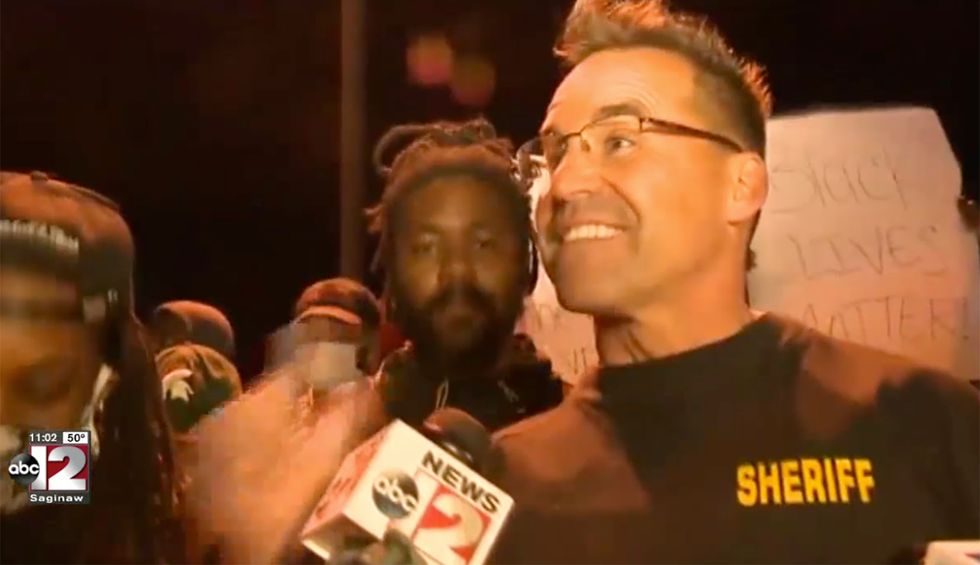 Amid a national wave of uprisings against police brutality in response to last week's brutal murder of George Floyd in Minneapolis, Minnesota—but in contrast to a wave of aggressive and violent responses from law enforcement to those demonstrations—a scene in Flint, Michigan that played out Saturday evening offered an alternative to aggressive police tactics as a local sheriff and his fellow officers laid down their riot gear and joined with those members of the community who came out to voice their outrage and sorrow.

When Genesee County Sheriff Chris Swanson, his deputies, and local officers were confronted by community members who marched on the Flint Township police station, witnesses described how Swanson told the crowd he wanted their pleas to be heard and that the police wanted to be in service of their demands and the protest itself.

After communicating with protest leaders and others, Swanson put down his riot gear and told the crowd he and other officers would join with them.

"We wanna be with y'all. I took my helmet off, laid the batons down," said Swanson as the crowd cheered him on and offered high-fives. "I want to make this a parade, not a protest."

What transpired was documented in a powerful photo essay by Leni Kei Williams, a local photographer, who posted the experience to Facebook.

"We weren't sure what to expect. With everything we have been seeing on the news, it wasn't clear what would happen but as we were walking, it was beautiful to see people of every race, age, demographic come together and unite," Williams wrote. "When we reached the police station, the officers were lined up and everyone immediately took a knee. The Sheriff asked one question... 'We are mad too! What can we do?' and the crowd responded, 'Join us.'"

"You got little ones here, you got dogs," he said to the crowd in remarks caught on camera. "So listen, I'm just telling you, these cops love you. That cop over there, hugs people. So you just tell us what to do."

"We can't forget on all our police cars across the nation it says, 'protect and serve.' That means all people, that means all people deserve the same dignity," Swanson later told local news outlet WJRT. "If you can't call out what's wrong, try to make it right. And that's the magic we saw tonight. Nobody's arrested, nobody got hurt. This is how it's supposed to be."

While Minneapolis police officer Derek Chauvin was arrested and charged Friday with 3rd-degree murder for the killing of Floyd, the other three officers on the scene at the time—two of whom can be seen in footage sitting on the man's back while the other stood over and did nothing to stop them—have yet to be taken into custody or charged. And while angry protests that have erupted over recent days in countless cities and communities nationwide have been met with violent police counter measures, what happened in Flint stood out to people as an example of progress and how law enforcement agencies should respond to communities that are grieving and rightly upset over the injustices of society.

"This is the way it's supposed to be—the police working with the community," said Swanson on Saturday night as he marched with demonstrators. "When we see injustice, we call it out on the police side and on the community side. All we had to do was talk to them, and now we're walking with them. ... The cops in this community, we condemn what happened. That guy (Chauvin) is not one of us."