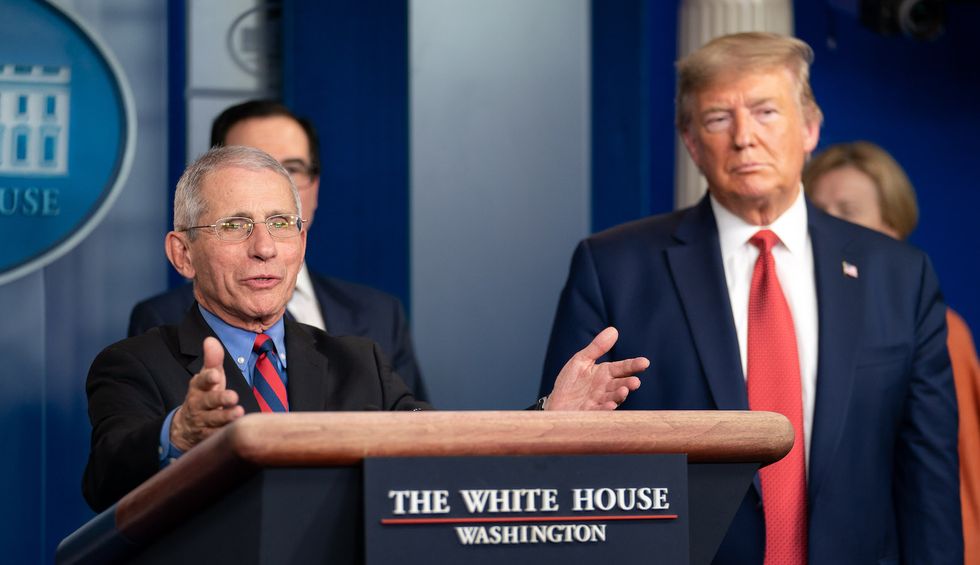 Dr. Anthony S. Fauci, director of the National Institute of Allergy and Infectious Diseases, and a member of the White House Coronavirus Task Force, responds to a reporter’s question at a coronavirus (COVID-19) update briefing Wednesday, March 25, 2020, in the James S. Brady Press Briefing Room of the White House. (Official White House Photo by Tia Dufour)
Jake Johnson
and
Common Dreams
May 12, 2020

Hours after President Donald Trump declared in a falsehood-riddled press conference that the U.S. has "prevailed" on Covid-19 testing as he continues to encourage states to reopen their economies, Dr. Anthony Fauci—the top infectious disease expert in the nation—is expected to warn in remote Senate testimony on Tuesday that attempting to return to business as usual too quickly will "result in needless suffering and death."

"The major message that I wish to convey to the Senate [Health, Education, Labor, and Pensions Committee] tomorrow is the danger of trying to open the country prematurely," Fauci told the New York Times in an email Monday night ahead of his hearing.

"If we skip over the checkpoints in the guidelines to 'Open America Again,' then we risk the danger of multiple outbreaks throughout the country," Fauci said. "This will not only result in needless suffering and death, but would actually set us back on our quest to return to normal."

In addition to Fauci, Centers for Disease Control and Prevention (CDC) director Robert Redfield will also testify before the Senate Tuesday morning. The hearing is scheduled to begin at 10:00 am.

Fauci and Redfield's testimony will come just hours after Trump claimed during a press conference in the Rose Garden of the White House Monday evening that the U.S. is prepared to "transition to greatness" in the wake of the Covid-19 pandemic, which has infected over 1.3 million people in the U.S. and killed at least 80,600.

Shortly after Trump claimed Monday that the number of Covid-19 cases is declining rapidly "all throughout the country," NBC News reported that an unreleased internal White House report shows that "coronavirus infection rates are spiking to new highs in several metropolitan areas and smaller communities" across the nation.

"The 10 top areas recorded surges of 72.4 percent or greater over a seven-day period compared to the previous week," according to NBC. "They include Nashville, Tennessee; Des Moines, Iowa; Amarillo, Texas; and—atop the list, with a 650 percent increase—Central City, Kentucky."

"The spiking infection rates suggest that the pandemic is spreading quickly outside major coastal population centers that were early hot spots," NBC noted, "while governors of some of the states that are home to new hot spots are following Trump's advice to relax stay-at-home restrictions."