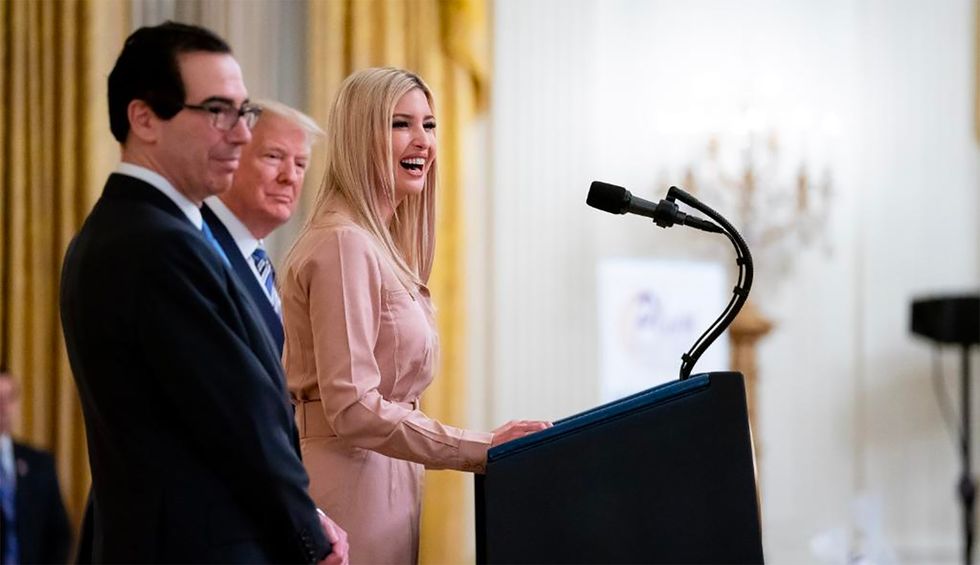 Photo via The White House / Twitter.
Hunter
and
Daily Kos
May 04, 2020News & Politics

The Washington Post takes yet another look at the Trump team's early and not-so-early response to the COVID-19 pandemic, this one based on 82 administration and other sources. As with every other report, it yet again describes an environment of magical thinking, outright denialism, incompetence, shunned expertise and an idiot narcissist in chief actively hostile to being told bad news.

The Post's lede is a perhaps-explanation of why even at the end of March, Trump and allies were still dismissing predicted death counts and claiming a rapid reopening was likely. Faced with the now-famous pandemic model estimating up to a quarter million U.S. deaths even with social distancing measures in place, a White House adviser with "no background in infectious diseases" made his own analysis, which predicted deaths would "peak in mid-April before dropping off substantially," with "far fewer fatalities than initially foreseen."

This is again consistent with the long-standing behavior of Trump's conservative, Republican team: If experts are warning that some preferred conservative policy, action, or inaction is likely to be dangerous or have a negative outcome, dismiss them, come up with your own numbers based on your own non-expert understandings, and push forward anyway. From climate change to tax policy, the "conservative" stance is now almost always whatever the experts are warning it should not be; no matter how many tax cuts are passed, it never leads to the economic windfalls claimed; no matter how many decades are spent pissing away time with claims that climate experts could not possibly be right in their measurements and analysis, each passing year only brings new confirmations that they are.

A worldwide pandemic of the sort infectious disease experts have warned has come many times before and will come many times again may kill millions, unless massive civic efforts are made to stop it? That sounds unpleasant. Perhaps your entire field of expertise and every world expert is simply wrong, based on these figures I spent the weekend looking up on the internet. Let us assume so, and move on.

It is a team so Kudlowesque that it includes Larry Kudlow himself.

The rest of the Post report describes a similar miasma of magical thinking, among the Trump team, though peppered with the usual quotes from the usual toxic administration liars piping up with claims of success so gaudy to appear outright delusional. Trump receives a visit from Laura Ingraham and her show's team of quacks. Trump lurches into believing a new drug he has just heard of may be the cure needed all along, not because there is evidence for it but because Trump cannot stomach an alternative scenario in which it is not. The federal government of the United States of America is continually bent to and fro to support the Trump team's latest whims, taking top-tier attention, repeatedly, off the most urgent real concerns.

Vice President Mike Pence's chief of staff Marc Short emerged as a "vocal" sceptic in opposition to The Actual Experts, and said in internal White House discussions that he "did not believe the death toll would ever get to 60,000 and that the administration was overreacting, damaging the economy and the president’s chances for reelection."

His skepticism was based on what? We do not know. But the death count is currently nearing 70,000, and is likely to reach 80,000 and 90,000 in short order, and Marc Short is likely not spending a single moment reflecting on his catastrophic wrongness; rank sociopathy seems to be the only consistent trait required for holding any top Trump team position. Despite Short's failure he evidently continues to be successful in his push to "reopen" the economy and resume normalcy, suggesting that nobody else in the White House finds the deadly collapse of their own predictions and gambles to be worth revisiting either.