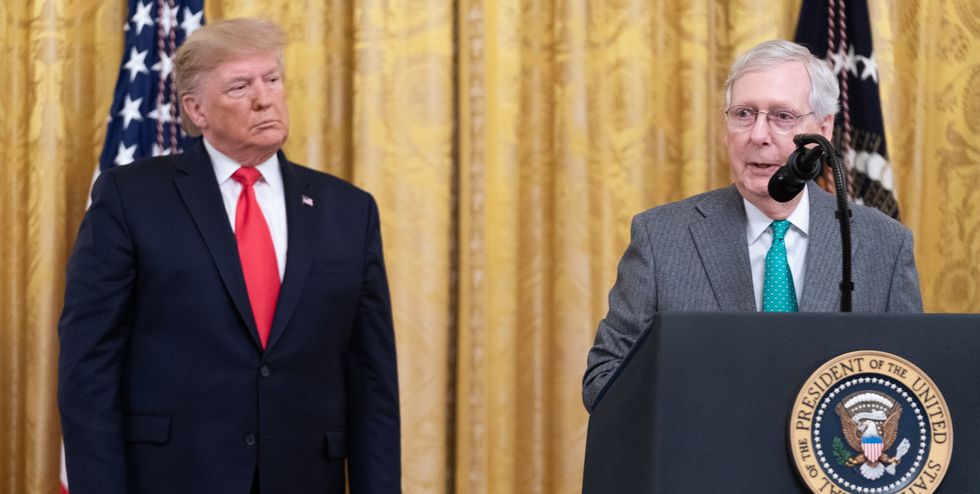 Donald Trump might want to seize the opportunity provided by the COVID-19 pandemic crisis to destroy Social Security, but it appears Senate Republicans don't want to have that fight right now. That doesn't mean they're not on board with all the other tax cuts Trump is eyeing, but even Senate Republicans seem to understand that the payroll tax cut Trump wants is ridiculous.

Trump's talking about a slew of new tax cuts for the wealthy. Because of course he is. That includes a cut in the capital gains tax rate and more corporate  giveaways, allowing companies to deduct the full costs of investments they made during this crisis—and in perpetuity, if Trump has his way. Also, he wants to expand the deduction for corporate spending on meals and entertainment, which wouldn't benefit Trump resorts at all, I'm sure. What he also wants to do is to suspend the payroll tax for workers, which does pretty much nothing to help anyone. It stops the flow of funds into the Social Security and Medicare system that is now keeping older Americans afloat and is a gift only to the people who need it least right now—the ones who are still getting their paychecks. That's not a fight Senate Republicans want to get mired in right now.

Even those Republicans look at this situation and understand that a payroll tax cut really doesn't help. "I'm not a particular fan of that," said South Dakota Sen. John Thune, Mitch McConnell's deputy. He added: "I guess I'm open to being persuaded that it's something that could be effective, but I think some of the things that we are currently doing are having a bigger impact." With other Republicans knocking the idea, even Sen. Susan Collins has come out against it. "I've never thought that really would be effective," she told The Washington Post.

No, these Republicans are looking at a much bigger assist to corporate America. They want all private employers to be exempted from liability claims for coronavirus. All those businesses now reopening, too soon and while the virus is still storming around the country, wouldn't be held responsible for their employees' or customers' health. Even healthcare workers—perhaps especially healthcare workers—in private hospitals couldn't find redress for being forced to work in unsafe environments. "If there's any red line," McConnell said Tuesday, "it's on litigation," completely dismissing Trump's ultimatum that the payroll tax cut be included.

Democrats have called blanket liability and payroll tax cuts both nonstarters, and are moving on a much larger bill "including housing, social services, law enforcement, tribal government needs, food security, the Postal Service, rural broadband, rent and mortgage relief, as well as veterans issues." You know, stuff that helps everyone, now. Democratic Leader Sen. Chuck Schumer has focused his response to McConnell on that. "This idea of drawing red lines—particularly when they're not really related to what the needs of people are, particularly when they side with big corporate interests as opposed to individual workers, as Leader McConnell's red line—it's not productive and it's not going to work," Schumer said Tuesday. "People have real needs."