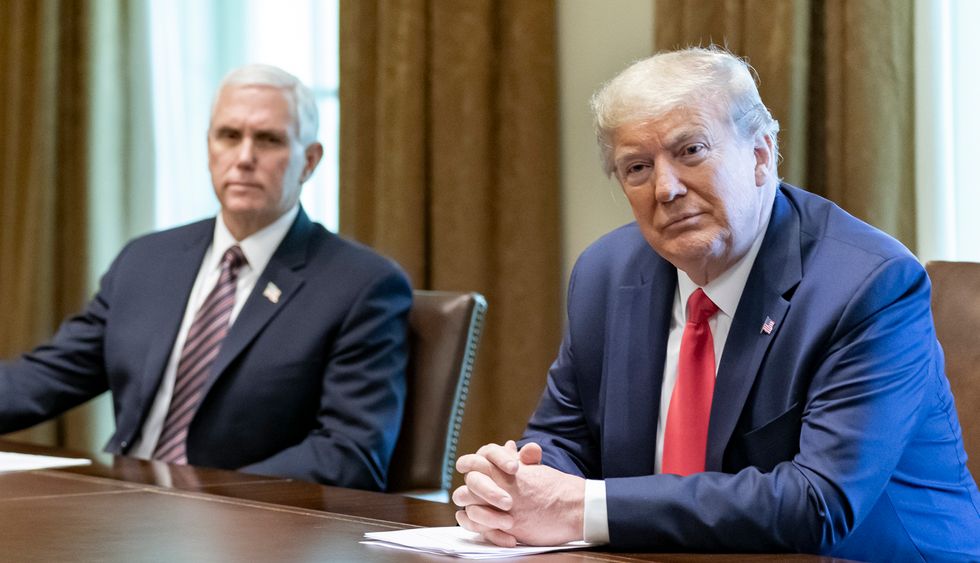 President Donald J. Trump, joined by Vice President Mike Pence, meets with patients Tuesday, April 14, 2020, who have recovered from the COVID-19 Coronavirus, in the Cabinet Room of the White House. (Official White House Photo by Shealah Craighead)
Travis Gettys
and
Raw Story
May 13, 2020

Associated Press reporter Jonathan Lemire told MSNBC’s “Morning Joe” the president doesn’t seem to understand that reopening businesses too soon will lead to another surge of infections and set the economy back even further, because he doesn’t interact much with his public health experts.

“You are having some of the public health officials like Dr. [Anthony] Fauci and Dr. [Deborah] Birx are saying that publicly but also privately in the Situation Room in the task force meetings chaired by the vice president,” Lemire said. “Meetings, mind you, the president himself usually doesn’t attend. But those are happening less frequently, even within the building there’s the focus towards the economy now, less of the public health.”

That’s not to say the president hasn’t heard any warnings about the risks from reopening, Lemire said.

“There are some congressional allies and outside advisers who are still warning the president about how devastating it would be if there were a major flare-ups again over the summer or, indeed, that second wave that Dr. Fauci yesterday, again, said he believes is coming,” Lemire said, “that there will be a second wave this fall and that that, of course, would devastate the economy in addition to costing thousands of Americans their lives.”

“The president has, on occasion, bent to the public health advice,” he added. “He did most famously, of course, when he backed off his idea of reopening the country by Easter. Instead, he pushed it back a few weeks. But the CDC guidelines were created.”

The president hasn’t exerted his leadership to help contain the pandemic, and instead has delegated his duties to governors and local officials.

“States haven’t met the threshold to reopen, but the White House is not stopping them either,” Lemire said. “In some ways that’s because the White House is putting the onus, again, on the states, so if things go bad perhaps the president can blame others for what happened rather than himself, which is sort of par for the course throughout this particular crisis.”