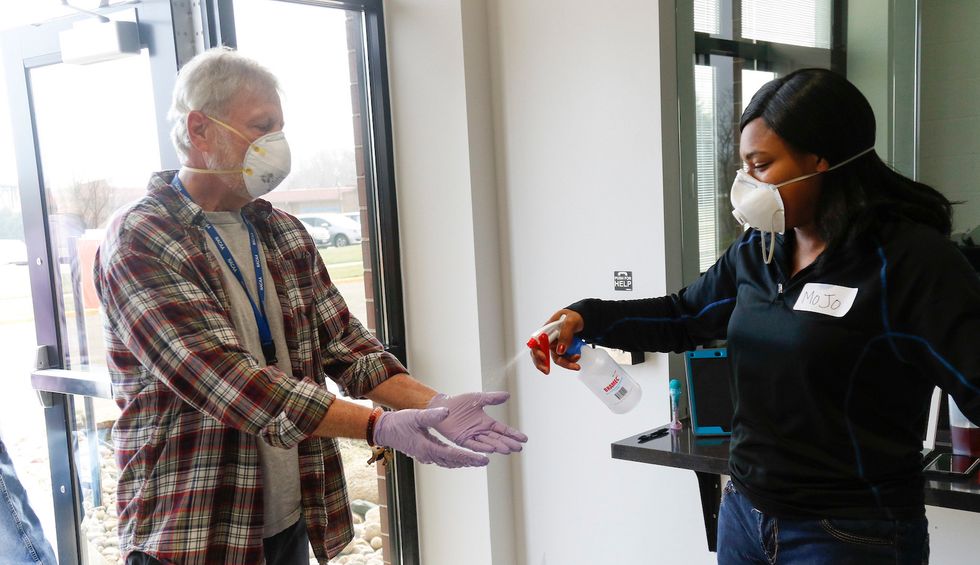 Sgt. Monica Miggins, a Soldier with the 1158th Transportation Company out of Beloit, Wis., sanitizes voters’ hands before entering a polling place in Fitchburg, Wis., April 7, 2020. More than 2,400 Citizen Soldiers and Airmen were mobilized to state active duty to assist as poll workers in the state’s elections. Wisconsin National Guard Photo by Spc. Emma Anderson
Jake Johnson
and
Common Dreams
May 20, 2020

President Donald Trump on Wednesday morning threatened to block federal funding to Michigan over the state's decision to send absentee ballot applications to all 7.7 million registered voters to ensure they can vote in August and November elections without risking the spread of Covid-19.

"Breaking: Michigan sends absentee ballots to 7.7 million people ahead of Primaries and the General Election," Trump tweeted. "This was done illegally and without authorization by a rogue Secretary of State. I will ask to hold up funding to Michigan if they want to go down this Voter Fraud path!"

Critics noted that while withholding funds in such a way would likely be illegal, the president's threat shows the lengths to which he is willing to go to stop an expansion of voting rights and ballot access amid the coronavirus pandemic, which has already killed nearly 5,000 Michiganders. Trump has repeatedly voiced opposition to mail-in voting—for everyone but himself—and warned that expanding it would mean "you'd never have a Republican elected in this country again."

"Michigan wants to help people vote safely, so they're sending absentee ballot applications to every voter there," tweeted advocacy group Swing Left. "This is legal. Trump just doesn't like it because he doesn't want you to vote."

On Tuesday, Michigan Secretary of State Jocelyn Benson announced that all of the state's registered voters will receive absentee ballot applications in the mail ahead of the state's August congressional primaries and the November general election.

"By mailing applications we have ensured that no Michigander has to choose between their health and their right to vote," said Benson.

"The president is wrong here: Michigan is not sending absentee ballots to all voters in the general—just applications," Phillips tweeted. "Other Republicans secretaries of state have done this already for upcoming primaries, but the real concern for Trump here is what happens in November."