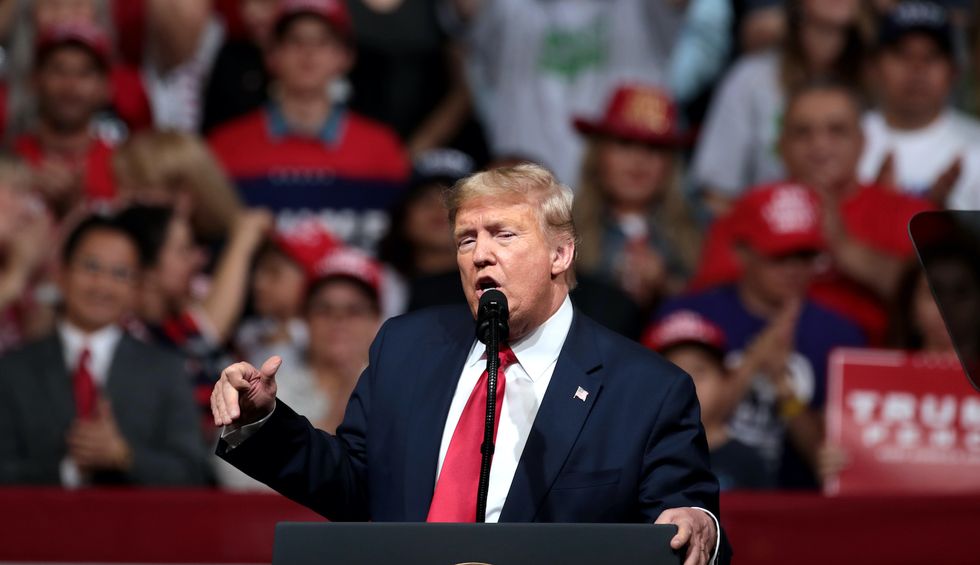 Donald Trump is done trying to actually win over new voters. Ya know, campaigning—that thing you do when you're trying to actually get to 50-plus-one to win an election. Last year, the Trump campaign had some grand plans to expand the electoral map beyond the normally blue Rust Belt states that narrowly delivered him the election in 2016.

In May of 2019, Team Trump was reportedly eyeing New Mexico, Nevada, New Hampshire, Colorado, and Minnesota. By June, that expanding map had been whittled down to just the first three of those five states. Now that expanding map is nothing more than a fading memory. As Democrats begin to eye new opportunities in states they lost in 2016—such as Arizona, North Carolina, and Georgia—when's the last time you heard anything from the Trump camp about opening new frontiers against Democrats?

In fact, now Team Trump has been left scrambling to defend itself in five of the six key battleground states—Florida, Arizona, Michigan, Pennsylvania, and Wisconsin. Democrats won major victories in 2018 in all of those states except Florida, where they surrendered a Senate seat and lost the gubernatorial race. Still, the only battleground state where Trump is presently clinging to a lead is in North Carolina.

According to Real Clear Politics, Joe Biden has an average lead nationally of +5.3 points. And here's the RCP averages in the six battlegrounds:

So forget about expanding the map, now Trump has a new strategy. Instead of actually trying to win more voters over to his column, he's just going to rip the country apart and hope against hope those shreds sow enough confusion to claim victory in November.

Think about it, he's declared war on Michigan and Nevada for trying to make voting more safe and accessible (California too, but we all know where the Golden State will land on Election Day). There's nothing like trying to win an election by going to war with one state you can't afford to lose and another you were trying to woo into your corner.

Trump's also declared war on older voters by making them entirely expendable in his effort to jumpstart the economy and get reelected. Those voters, who seem to value their own lives, have taken note and it's hurting Trump in several swing states, including the retiree hotspot of Florida.

It's never going to end, and there's also nothing sane about Trump’s posturing from the standpoint of running a traditional political campaign. No campaign manager would ever tell their candidate to go to war with the leaders of critical swing states, key voting blocs, or anyone who’s a public health enthusiast.

Trump isn't campaigning to win, he's campaigning to divide the country against itself in every possible way. It's entirely possible that Trump's entire strategy at this point is to foment enough discord and doubt that he can successfully call the 2020 results into question if they don't go his way. Because frankly, there's no other possible explanation for his behavior other than he's entirely off his rocker. But as long as we’re at it, let's not count that one out either.