Trump is afraid wearing a mask will ‘send the wrong message’ and hurt his re-election chances: report 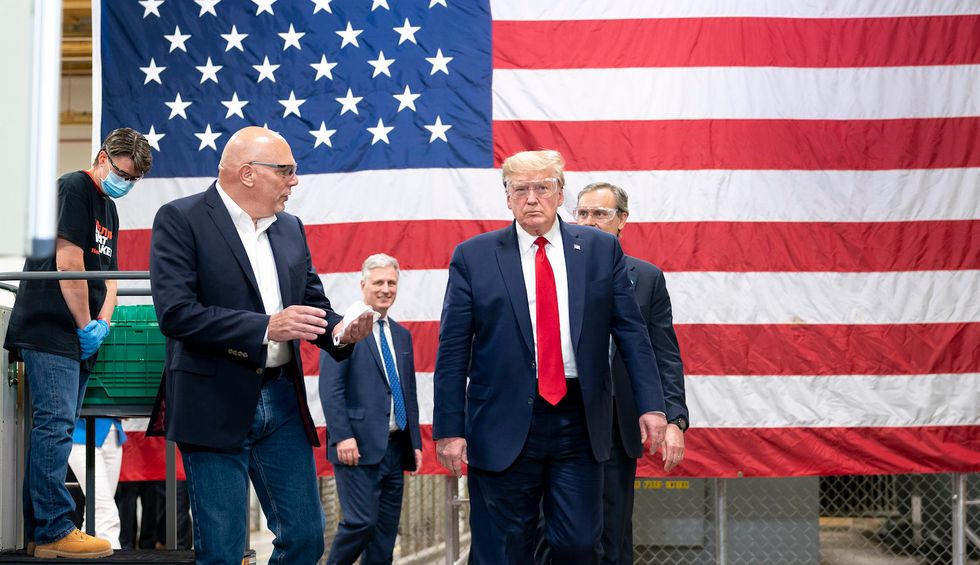 The irony of President Donald Trump’s refusal to wear a mask this week at a mask-manufacturing plant did not go unnoticed, even though he claimed the head of Honeywell told him he did not need to – despite signs to the contrary.

But The Associated Press reports the real reason President Trump refuses to wear a mask is he thinks it will hurt his re-election chances.

Trump has told White House and campaign aides in private he believes if he wears a mask it will “send the wrong message.” Mask-wearing is to protect other people, not the wearer.

“The president said doing so would make it seem like he is preoccupied with health instead of focused on reopening the nation’s economy — which his aides believe is the key to his reelection chances in November,” the AP adds.

Trump has always followed the “do as I say and not as I do” doctrine.

On Wednesday a reporter in the Oval Office mentioned to the President that he did not wear a mask when touring the mask-making facility.

Trump claimed he was told he didn’t have to, and added, “as you know we were far away from people.”

The reporter then mentioned that Trump was holding an event honoring nurses and yet he was not practicing social distancing or wearing a mask.

“Mr. President, what kind of message does it send if you’re surrounded by nurses who are not social distancing and not wearing masks?”

“Well I can’t help that,” Trump snarled. “I mean look I’m trying to be nice I’m signing a bill, and you criticize us. Look, here’s the story: there’s nothing I can do to satisfy the media, the Democrats, or the fake news, and I understand that.”

REPORTER: What kind of message does it send if you're surrounded by nurses who are not social distancing and not we… https://t.co/mPFlq5Linq
— Aaron Rupar (@Aaron Rupar) 1588789133

Trump was the one who made the public announcement last month that the CDC was urging all Americans to wear masks to protect those around them and slow the spread of the coronavirus.

As he made the announcement he interjected, “I don’t think that I’m going to be doing it.” On national television.

Trump also mocked the idea months ago that people should stop shaking hands.

At a Fox News town hall in March Trump said, “you can’t be a politician and not shake hands. And I’ll be shaking hands with people—and they want to say hello and hug you and kiss you—I don’t care.”