Trump is a cornered rat -- and the coronavirus has him trapped 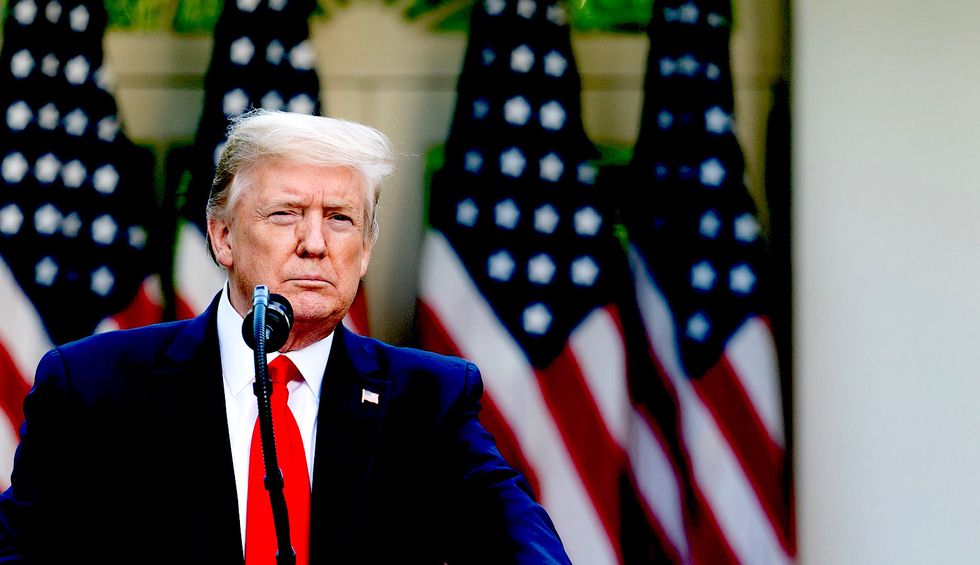 This is why Donald Trump is awake at 2:30 a.m., rage-tweeting. When he sleeps, he dreams, and his dreams are nightmares. He's a frightened, desperate man. Every day, he turns on his television, and the death count from the COVID-19 virus keeps going up. The economy — the precious economy, the one he's so proud of for no particular reason — is tanking. His poll numbers are down. His approval ratings are down. He's losing to Joe Biden in national polls and in every important swing state. Nothing he does is helping.

He has tried everything to beat the virus. First he denied it was a problem. You remember the quotes from February and March: It's only a few cases. Like magic, it will just go away. Then his people convinced him it wasn't going away, and he had to do something. So he trotted out a string of corporate execs and golf buddies onto a stage in the Rose Garden and declared a national emergency. Surely that would fix things!

But the virus kept spreading, and people were dying. The NBA canceled its season. So did Major League Baseball and NASCAR. Businesses started closing … General Motors, Ford, big businesses — and then small businesses like restaurants and retail stores and salons and barber shops. Unemployment numbers skyrocketed. Six million. Then another five million. Another six million. And those were just the people out of work who actually applied for unemployment benefits.

The virus kept spreading, and people kept dying. Trump called together a "task force" to confront the problem, and he put his vice president in charge. So Mike Pence started holding briefings in the White House press room with input from experts like Dr. Anthony Fauci and Dr. Deborah Birx, the one with the shoulder scarves. When all the networks started covering them and the ratings were through the roof, Trump took over the briefings himself.

But things kept getting worse. The virus was everywhere. Hospitals were running out of protective gear like gowns and masks, emergency rooms were overrun, there was a shortage of ventilators. They had to do something, so they printed up a bunch of cards with "guidelines" for something called social distancing that was supposed to last 15 days.

Then Congress got involved and passed some emergency bills. First it was in the billions, then it was in the trillions. Small business loans, hundreds of billions — gone in a matter of days. And still the unemployment numbers went up.

Then they hit the end of the 15 days, and the death count kept going up, so they extended the "guidelines," and he started pushing a cure his pals were talking about on Fox, some malaria drug called hydroxychloroquine. "What have you got to lose?" he crowed from the podium at the briefings.

Apparently, a lot. People started dying from the hydroxychloroquine, something to do with their hearts. So he stopped pushing the pill, and he pivoted to "opening up" the economy. Away went the "guidelines," and up popped the tweets: LIBERATE Michigan! LIBERATE Virginia! Let's get those businesses up and running! He put out new "guidelines" for opening up the economy. Three phases! Real simple! Just get your numbers of new cases down for 14 days, and everything can start getting back to normal!

About half the states announced relaxation of rules, and businesses began to reopen. But the virus kept spreading. Now it was in rural Georgia and Arkansas and Iowa, all those precious red states he could point to that were "doing things right," that didn't need to be "bailed out" like "Democrat states."

The death count kept increasing, and some idiot in the CDC came up with the theory that sunlight and ultraviolet rays could kill the virus. Bleach and other disinfectants definitely killed it (on countertops, that is), so Trump pushed the "light" and the disinfectants "inside" and his whole house of cards fell apart.

They were making fun of him! All those pundits and newspapers and networks he had been having so much fun yelling at during the briefings … they were laughing at him! So he decided he'd show them! He canceled a few briefings, then he showed up for one and walked out after a few minutes. Then he decided he would announce that he was phasing out the "task force." A day later, he was back in front of the cameras saying he hadn't realized how "popular" the task force was, so of course he'd  keep it going — not because the task force was accomplishing anything, but because it was "popular."

But behind the scenes, Trump was getting briefings. Terrible briefings. Really awful stuff. His own campaign manager, Brad Parscale, who was reported to have spent his hefty paycheck from the Trump campaign on condos, a luxury boat and a Ferrari, met with him and showed him his internal poll numbers. They were terrible — worse than the public numbers according to some reports. He blew up at Parscale. He was in a rage, screaming at the poor guy at the top of his lungs. All the stuff he'd been doing — all the briefings, all the guidelines, all the trillions in relief money, all the magic cures — and look where it got him! Nowhere!

This week came the private briefings on the economy. They were terrible, according to NBC News. "Some of the projections showed the unemployment rate skyrocketing above 30 percent and the widespread collapse of small businesses, according to multiple people familiar with the briefings." One projection had more than 50 percent of American small businesses collapsing if the country did not get back to work.

"The projections have infuriated Trump," one source told NBC. "He lost it."

He must have "lost it" again on Friday morning when it was announced that unemployment in April hit 14.7 percent. "I think the real number is probably around 23 or 24 percent. It's devastating," said Neal Kashkari, president of the Federal Reserve Bank of Minneapolis, on the "Today" show.

Trump got away from the White House for the first time this week, traveling to Arizona (a state where his numbers aren't where he wants them to be) to visit a factory that makes face masks. Hovering over a worker wearing a mask who was making masks, Trump didn't wear one. Aides later explained he thought he would look "weak" and "ridiculous" in a face mask.

By Thursday, it was revealed that one of Trump's valets had tested positive for the virus. This is the person who serves Trump his meals and brings him his Diet Cokes. On Friday,  we learned that Katie Miller, an aide to Vice President Pence — who is married to Stephen Miller, Trump's most nefarious adviser — had tested positive for the virus. Pence was conspicuously unmasked last week during a visit to the Mayo Clinic in Minnesota, flouting the clinic's rule that everyone wear masks.

Donald Trump has consistently shown contempt for the coronavirus. Now the virus, which has infected 1.3 million people in this country and killed more than 78,000, has made its way into the White House. Experts were saying on Friday that the virus has probably spread completely through the West Wing. Of course it has. Sources told MSNBC that "no one" in the White House has been observing social distance rules or wearing masks.

Trump's arrogance and dithering and denial has cost tens of thousands of American lives and will cost tens of thousands, if not hundreds of thousands, more. He is the president, and he is supposedly in charge, and nothing he has done has worked. His scattershot plan to "reopen" the economy won't save him. Blaming China or Barack Obama or Joe Biden or anyone else won't save him. He is a defeated, desperate man. We still have to vote in the election in November, but he has already lost. The virus beat him.