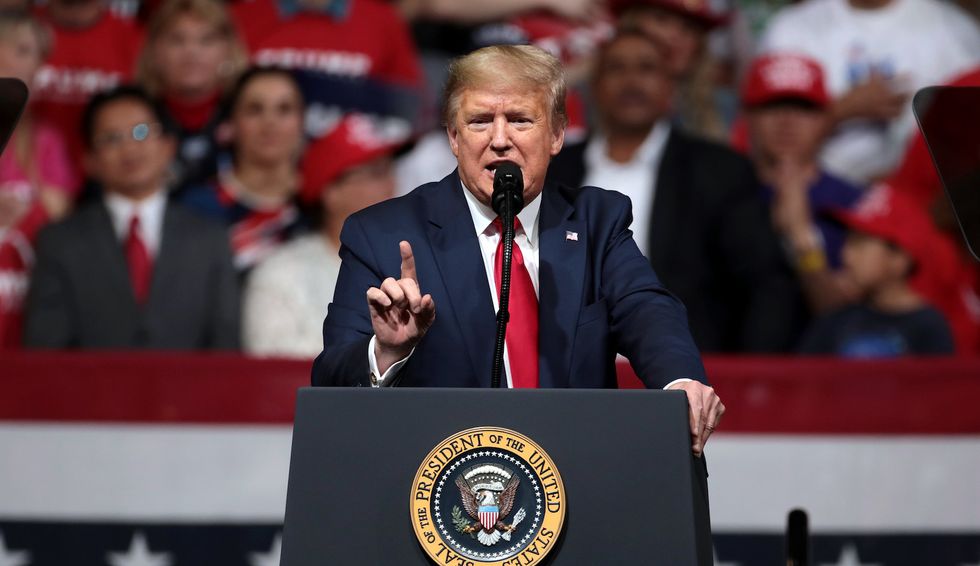 Axios is now reporting that Trump will soon dive deeply into even worse behavior than he is currently wallowing in, and that the pile of excrement posing as president will soon argue that the people dying of COVID-19 are actually now dying of something else.

"A senior administration official said he expects the president to begin publicly questioning the death toll as it closes in on his predictions for the final death count and damages him politically," Axios reports.

An alleged argument, says the outlet, will be that because because Medicare is giving money-losing hospitals a 20% bonus for treating each COVID-19 patient, there is a "distorted financial incentive" for hospitals to claim their patients are dying of the pandemic.

So we can prepare for that, no doubt. Trump and his team of fascist, corrupt incompetents are contemplating how boldly they can publicly argue that America's medical personnel are faking COVID-19 deaths to cheat his government out of money. And it is quite possibly the worst and most unforgivable claim this team of grifting bone-spur-having cowards has yet come up with, whether they say it publicly or chicken out, continuing to merely grouse to each other about it behind the scenes, and there is very little else that can be said about that without saying something we all might at some point regret.

There is absolutely no evidence for a claim that hospitals are faking pandemic deaths. None. Zero. It is insane, psychopathic bullshit spewed by a decompensating narcissist so wounded that a worldwide pandemic is not bowing to his fantasy wishes and simply evaporating that he instead will be arguing that the pandemic itself is in large part a hoax against him, his tiny hands, his puffy spray-painted face, and his own grand reality-bending majesty.

In reality, it is an absolute certainty that American COVID-19 deaths are still being substantially undercounted, including in New York. And the United States is not alone in having to revise its numbers upward as the true scope of the pandemic becomes clear; other countries have seen sudden "jumps" of deaths after it became clear that insufficient testing had not kept up with the true numbers.

Though Axios relies on at least two sources for the claim that Trump and team believe hospitals are being dishonest for financial gain, the outlet reported that another "senior" official "pushed back," instead claiming that Trump is not "skeptical" of those deaths per se but is more narrowly peeved because the death toll is being revised to include "presumptive" COVID-19 deaths—in other words, people showing all the symptoms of the disease but who were not able to be tested before being carted off to makeshift morgues because impeached and criminal President Shitforbrains would not take the steps necessary to ramp up testing and has now washed his shriveled grifting hands of even trying. So Dear Leader's new "thinking," says the pushbacker, is that he needs to "properly convey" to the American people why they should not be "startled" by the escalating death toll number.

Aside from being a nuance about three times more difficult than anything Donald Trump's walnutbrain-to-mouth pipeline has been able to clearly express during the whole duration of his extended political foray, it is also conspicuously not a direct refutation of what the other sources reported. Trump believes the numbers are inflated; Trump believes the numbers are inflated because hospitals are reporting "presumptive" cases that Trump believes should not be included on his scoreboard; Trump therefore believes it is an attack on him, and intends to attack back. Possibly by publicly arguing what he and his advisers are grousing about in private: those hospitals are lying.

The logic behind such a push would be self-evident, when dealing with a man as obviously impaired as Trump. Trump claimed everything was under control, and demanded the economy perform its dance for him in time for election season. He therefore needs to now claim that regardless of what the pandemic death toll rises to next, he is still being victorious: It is just that the Media, and the Hospitals, and the Cemeteries are lying to you.

And then he will order the Blue Angels to fly over again, perhaps this time drop bombs on hospitals he most suspects are somehow cheating him or making him look bad. You cannot say he would not consider it. Look around you. He has sent every malevolent thing his brain can think of out his word-hole and towards his equally moral-devoid sycophants at one point or another, and his skin still crawls as he tries to think of new ones that might finally end the criticisms once and for all.