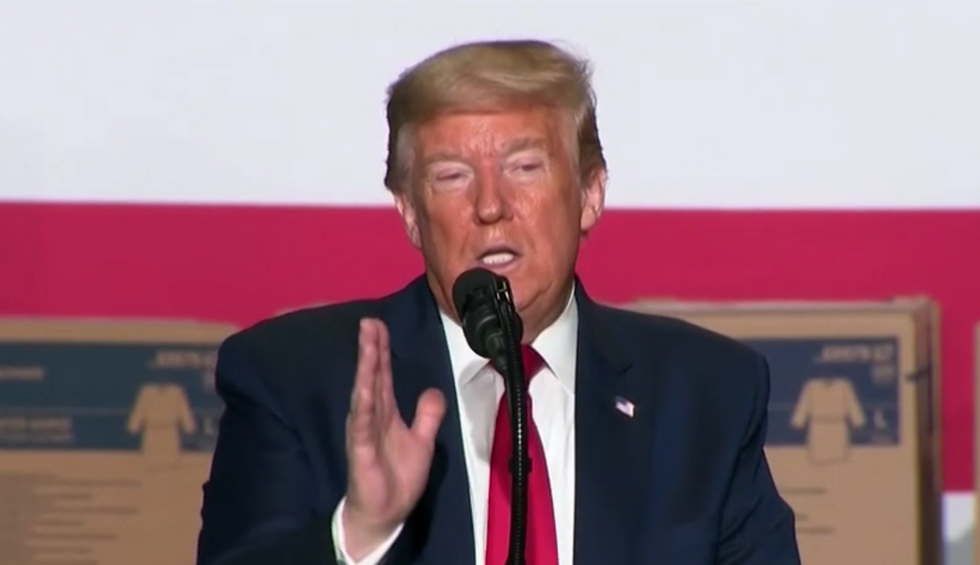 As healthcare workers across the U.S. continue to protest the federal government's failure to provide adequate personal protective equipment and ensure strict workplace safety standards to protect them from Covid-19, President Donald Trump on Thursday—standing in front of stacked boxes of medical supplies—said that frontline nurses and doctors "running into death just like soldiers run into bullets" is "a beautiful thing to see."

"They are warriors, aren't they?" Trump said during a speech at a medical equipment distribution center in Allentown, Pennsylvania. "When you see them going into those hospitals and they're putting the stuff that you deliver, but they're wrapping themselves and the doors are opening and they're going through the doors and they're not even ready to go through those doors. They probably shouldn't."

"They're running into death just like soldiers run into bullets, in a true sense," the president continued. "I see that with the doctors and the nurses and so many other people. They go into those hospitals, it's incredible to see. It's a beautiful thing to see. But I really call them 'warriors.' We're all warriors; everyone in our country is a warrior."

Medical professionals were appalled by Trump's glorification of the dangerous and sometimes deadly risks their jobs entail amid the coronavirus pandemic, particularly as the president fails to take action to guarantee that all healthcare workers have sufficient protective equipment.

Trump has dismissed reports of PPE shortages at hospitals and nursing homes across the country as "fake news." When one nurse said during an Oval Office visit earlier this month that PPE supplies have been "sporadic" at her workplace, the president quickly contradicted her, saying, "Sporadic for you but not sporadic for a lot of other people."

"Donald Trump should be ashamed to suggest that we healthcare workers 'running into death' is beautiful," Davidson tweeted. "Death is not beautiful. Inadequate PPE is not beautiful. He should use the [Defense Production Act] to ensure an abundant supply of PPE and tests."

Dr. Rich Besser, a pediatrician and public health expert, said in an appearance on CNN that "what strikes me as not a beautiful thing is that we are sending essential workers into what would be battle... and we're not giving them the gear that we would give any other soldier."

"What it's saying is, 'We don't care. We don't care about protecting people's lives,'" Besser added. "Healthcare workers who are working without proper protective equipment, having to reuse masks, there's nothing beautiful about that."

Trump has repeatedly described healthcare workers as "heroes" and "warriors" in recent days, but nurses say they feel more like martyrs as they're left to carry out their life-saving work with inadequate masks, gloves, and other essential gear.

"We're feeling like we're being left on the battlefield with nothing," one nurse said during an April 21 protest outside the White House.

"You talk about how essential, how needed, how grateful you are, and yet you throw us to the wolves," Jean Ross, president of National Nurses United told CNN in an interview last week. "You throw us out onto a battlefield without armor."

A report by the Centers for Disease Control and Prevention last month found that more than 9,000 healthcare workers in the U.S. have been infected by Covid-19 and at least 27 have died—a number the agency acknowledged is likely a significant undercount.

Bonnie Castillo, executive director of National Nurses United (NNU), wrote in an op-ed for Business Insider this week that more than 100 registered nurses in the U.S. have been killed by Covid-19, including six NNU members.

"We demand our employers and government stop calling us 'heroes,' and instead act to protect our lives," Castillo wrote. "Platitudes are meaningless—and even insulting—without protections."