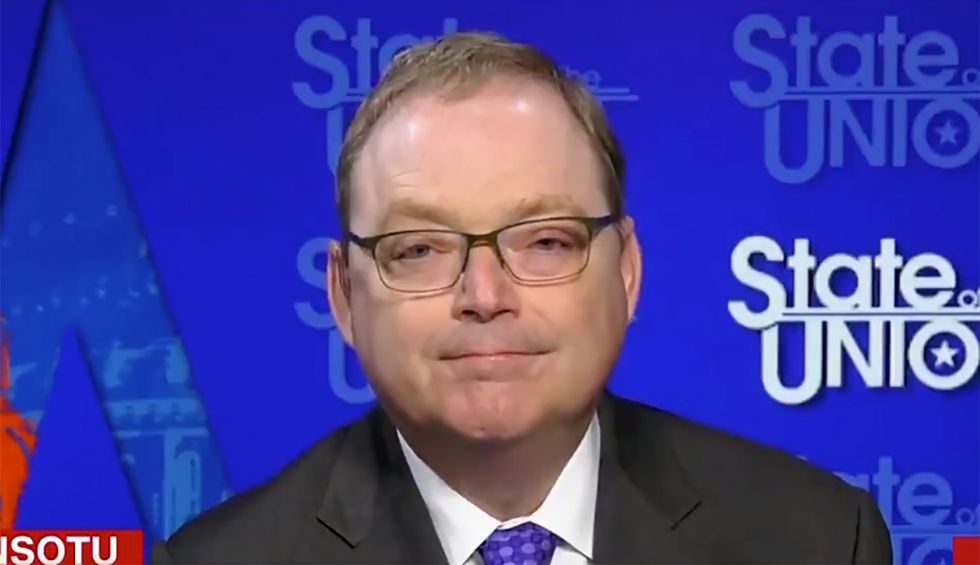 Image via Screengrab.
Laura Clawson
and
Daily Kos
May 11, 2020

Donald Trump’s personal valet has tested positive for COVID-19. So has Mike Pence’s press secretary, Katie Miller, who has not only been maskless at recent White House meetings but is married to top Trump staffer Stephen Miller. “It is scary to go to work,” top economic adviser Kevin Hassett said on CBS Sunday morning, adding an admission sure to be perceived as disloyal: “I think that I’d be a lot safer if I was sitting at home than I would be going to the West Wing.”

The appearance of coronavirus in the White House comes despite stringent measures to protect Trump and Pence, including daily testing for top aides and testing for outside visitors before they enter meetings with Trump. In other words, the White House is doing exactly what Trump has been saying the rest of the country doesn’t need to do to be safe—and it’s still not enough. Trump will have an opportunity to change his tune on testing in public remarks scheduled for Monday afternoon, but so far his stance has been that “by doing all of this testing, we make ourselves look bad.”

Pence “has tested negative every single day and plans to be at the White House tomorrow,” a spokesman said Sunday, despite Trump’s keen observation last week that Miller “tested very good for a long period of time and then all of a sudden today she tested positive.” Funny how that can work. By contrast, Centers for Disease Control director Dr. Robert Redfield and Food and Drug Administration head Dr. Stephen Hahn are self-quarantining, while Dr. Anthony Fauci will attend White House meetings only in a mask in what he’s calling a “modified quarantine.”

Redfield, Hahn, and Fauci are supposed to testify before a Senate committee on Tuesday and will do so by video conference. Committee Chair Lamar Alexander is also self-quarantining after a member of his staff tested positive. This is what it looks like among people who have access to testing and contact tracing. If it doesn’t look like that in other workplaces, how much of the reason is that the testing and contact tracing just aren’t being done?

Trump hasn’t abandoned his push to have states reopen businesses, but meanwhile The New York Times reports that the White House increased its call for its own staff to work remotely, “telling several lower-level aides in the press office, who had been coming into the White House, to work from home regardless of how they were feeling."

We’re accustomed to Republican hypocrisy, but rarely does it have such an immediate life-or-death effect.