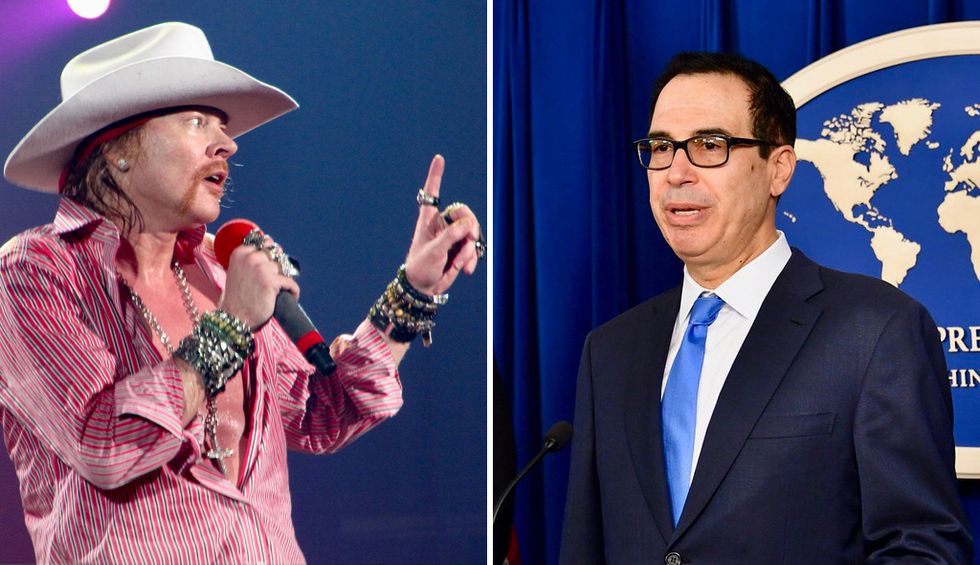 It isn’t uncommon for U.S. Treasury Secretary Steve Mnuchin to be criticized on Twitter by pundits for MSNBC and CNN or the Washington Post, but this week, the anti-Mnuchin tweets came from an unlikely source: rocker Axl Rose, who is best known for his many years as lead singer for Guns N’ Roses and replaced singer Brian Johnson on parts of AC/DC’s 2016 tour. And many Twitter users have been weighing in on Rose and Mnuchin’s Twitter feud.

On May 6, the 58-year-old Rose — an outspoken critic of President Donald Trump — tweeted, “It’s official! Whatever anyone may have previously thought of Steve Mnuchin he’s officially an asshole.” Mnuchin, responding to Rose’s tweet, posted, “What have you done for the country lately?”

Rose’s “officially an asshole” tweet lacked context, but the former GNR singer got into specifics in a subsequent tweet — posting, “My bad I didn’t get we’re hoping 2 emulate Liberia’s economic model but on the real unlike this admin I’m not responsible for 70k+ deaths n’ unlike u I don’t hold a fed gov position of responsibility 2 the American people n’ go on TV tellin them 2 travel the US during a pandemic.”

It’s official! Whatever anyone may have previously thought of Steve Mnuchin he’s officially an asshole.
— Axl Rose (@Axl Rose) 1588804087

It didn’t take long for other Twitter users to join Rose in slamming Trump’s U.S. Treasury secretary. The University of Denver’s Seth Masket, @Smotus, posted, “Take me down to the Capitol City Where Mnuchin gets owned by a rocker who’s witty” — a variation of “Paradise City,” one of classics on GNR’s multi-platinum 1987 album, Appetite for Destruction. GNR were among the best-selling hard rock/heavy metal bands of the late 1980s and early 1990s.

@AngelaBelcamino posted, “Axl Rose dragging Steve Mnuchin is what I live for,” while @Graceann319 told Rose, “Thank you speaking the truth!” And @carlomazzini posted, “Axl and G’n’R gave the WORLD a lot of joy with their music. Mnuchin and cronies gave us the 2008 financial crisis. Do the math.... (Thanks, Axl, my new hero!)”

@trump4jail2020 said of Rose, “I Loved you back in the day and it looks like that love has been reignited,” and @john_godish wrote, “You tell 'em, Axl.” Another Twitter user, @c_1_hris posted, “I agree with Mr. Rose! Steve Mnuchin is no more then a @realDonaldTrump stooly.”

@axlrose Your version of an Appetite for Destruction made the world a better place while @SteveMnuchin version will destroy us.
— Bonnie Weinberg (@Bonnie Weinberg) 1588857911