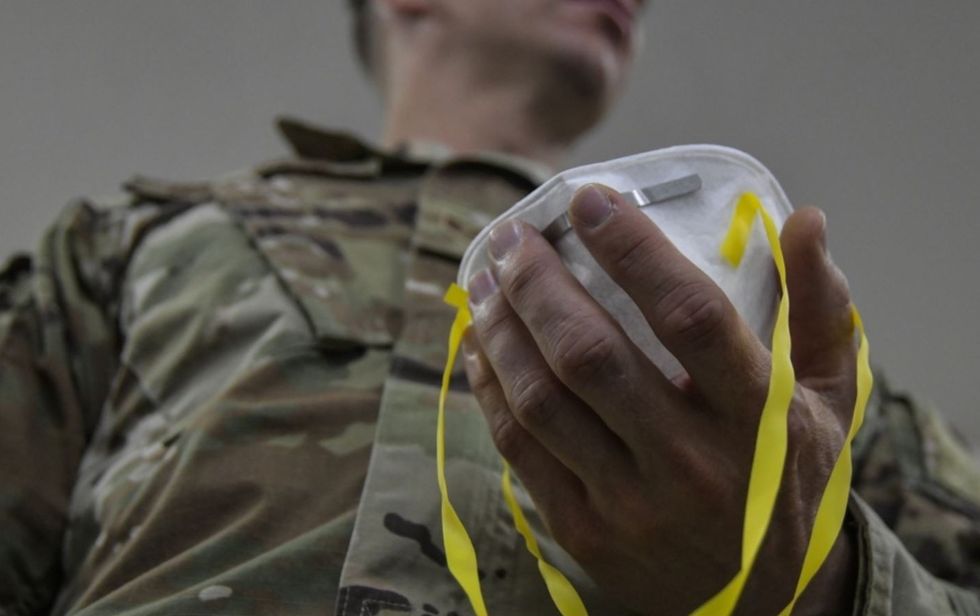 An Airman assigned to 407th Expeditionary Logistics Readiness Flight, adjusts the straps to his N95 mask to begin a fit test at Ahmed Al Jaber Air Base, Kuwait, March 13, 2020. Airmen are provided a N95 mask that is serving in a specific mission set that may expose them to potential contact with anyone who may have the COVID-19 virus. (U.S. Air Force photo by Tech. Sgt. Alexandre Montes)
Cody Fenwick
May 06, 2020

A new report from Vanity Fair's Diana Falzone published Wednesday recounts a series of stories in which the federal government has allegedly seized personal protective equipment — desperately needed during the coronavirus crisis — from private hands.

One businessman who owns a medical equipment supply firm said the FBI contacted him on the suspicion he was price-gouging, which he said his profit margins disproved. But his future shipments of N95 masks, which he planned to sell to "fire departments, nursing homes, and EMT departments," were seized by the Federal Emergency Management Agency, he said. Vanity fair reported that the document officials used to seize his orders cited President Donald Trump's executive order claiming authority to determine the allocation of COVID-19 resources.

U.S. Customs and Border Protection put a hold on the PPE shipment, saying it wanted to conduct a quality control inspection. The shipment was transferred to the Food and Drug Administration, which carried out the inspection and placed its own hold on April 21. “The product is still on hold to this day,” the businessman said. “One of the press secretaries from the governor’s office called me on April 25 and said, ‘I found out why they’re not releasing it. They’re trying to [find] a reason to fail it so that they can keep it.’

“I’m on a phone call with [FEMA]. I said, ‘Guys, I just heard I may have failed the [quality control] test,’” the businessman recalled. “And you know what FEMA said? ‘That’s okay, we want the product anyway.’” (The businessman told me he has since launched an internal investigation to determine whether his shipment did indeed fail the test. The investigation is ongoing.)

“They are not trying to puppet-master me,” he said. “They’re trying to squash me...What am I supposed to do? Close my doors because FEMA said they are going to take everything I have? How the hell do they think I feel when nursing homes call me needing earloop masks? How do you feel as a human being? I have a huge warehouse with product that can protect people, and I can’t comprehend how I can’t give it to people. People are dying of thirst, and I’m here with a cooler full of water watching people die.”

It's not just a single businessman, either. Governors have described similar stand-offs with federal officials, despite Trump's directive that states will have to get what they need on their own.

William Touhey, a fire chief in Milford, Massachusetts, told a similar story. He said in early March, his station put in an order with a West Coast distributor, a friend of a friend, for 30,000 waterproof gowns to protect nurses at a local hospital. When the connection called to check on the order, “he said, ‘You’re not going to get that. FEMA took it.’ We learned that FEMA was in China and took it directly from the factory [there]. FEMA was buying up everything they could get their hands on. It seems to be a very common theme.”

It's not clear if these actions by the federal government are legal. A lawyer said that they may fall within a "gray area," but from their perspective, the feds are "acting on thin or no legal authority." FEMA has denied seizing shipments, despite all the reports.