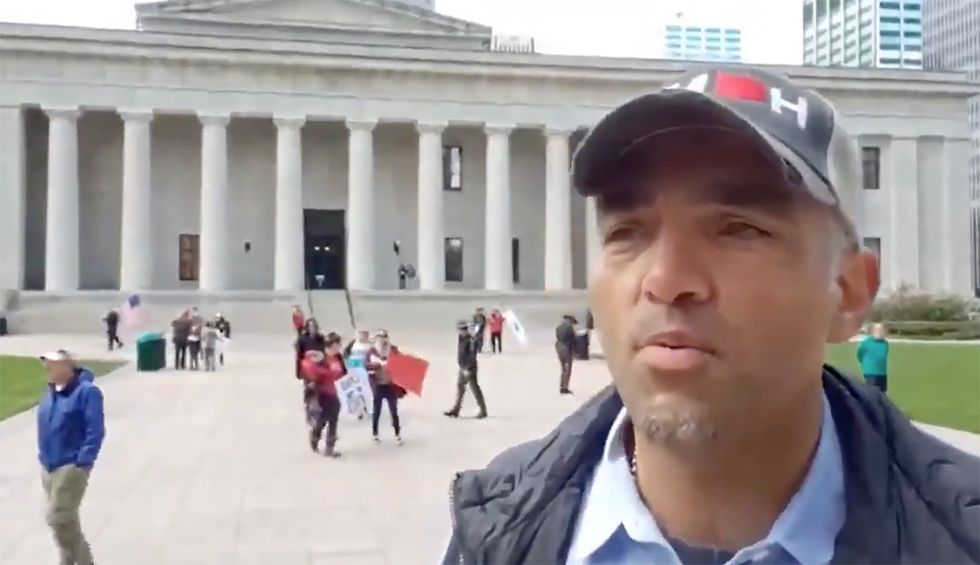 Image via Screengrab.
Travis Gettys
and
Raw Story
May 18, 2020

An Ohio Republican who refuses to wear a mask for purported religious reasons accused Gov. Mike DeWine of manufacturing the coronavirus crisis to gather dictatorial powers.

State Rep. Nino Vitale (R-Urbana) spun a conspiracy theory about the GOP governor in a Facebook post flagged by Ohio Capital Journal reporter Tyler Buchanan, which suggested DeWine knew about the novel coronavirus more than a year ago.

“The question we should be asking ourselves is what did DeWine know over a year ago that might make him desire to have such totalitarian powers for a possible ‘public health emergency’ back in early 2019?” Vitale posted.

Scientists and health experts have been warning for years about the possibility of a global pandemic similar to what has played out in the COVID-19 outbreak, and the George W. Bush and Barack Obama administrations developed and updated plans for responding to a health crisis that were handed off to Donald Trump’s administration.

Many state and local governments made similar preparations following outbreaks in the past decade, but Vitale — who refuses to wear a mask for fear of dishonoring God by covering his face — suggested DeWine may have engineered the crisis for political gain.

“Did he anticipate something coming a year later that would make it convenient for him to take total power and handle some ‘future health emergency’ that might be on the horizon?

Why was it so specific to a ‘health emergency?’” Vitale posted.

“The documents are linked here for you to read and ponder for yourself. The COMP DOCUMENT shows that the Ohio House took the smart step to remove this language from HB 166 and so it was never put into law,” he added. “Why did you bury these 88 lines in the 54,571 line bill you wrote in March of 2019 Governor DeWine? What did you know ‘might be coming?’”