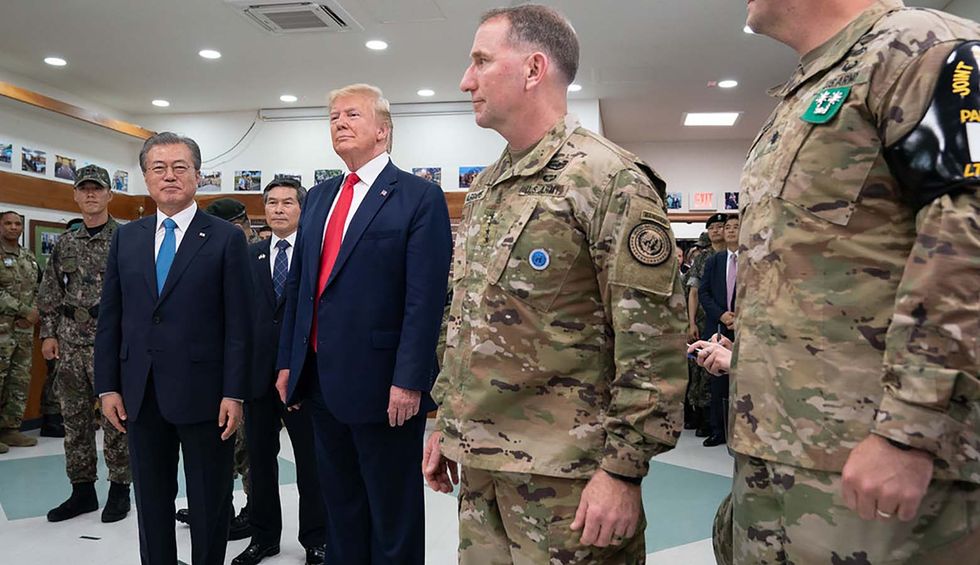 If America calls you a “hero,” prepare to die. The substitution of recognition for anything material or significant as means of gratitude and appreciation has defined Freedom Central’s treatment of its military for many years, ever since Vietnam veterans returned home to a country that wasn’t tying ribbons to trees, having parades in the streets, or mouthing the platitude, “Thank you for your service.” The arbiters of American politics and culture said, “An empty gesture is the least we can do.” And that’s exactly what they’ve done.

The real outrage of the Vietnam War was that it should have never happened. The Johnson administration told multiple lies, most egregiously regarding the “Gulf of Tonkin” incident, to launch the war, and remained detached from reality throughout its prosecution. 58,000 Americans died in the jungles of a faraway country, as did millions of innocent Vietnamese civilians.

Ron Kovic, a marine who made the lethal error of believing his government, returned to his family not in a box, but in a wheelchair. His life has become an exercise of inspirational testimony; a dedication to truth telling that began with the publication of his memoir, Born on the Fourth of July. In his poem that begins the book he declares, “I am the living death / the memorial day on wheels…”

The United States could have taken advantage of the tragedy of the Vietnam War to commit to peace, issuing a vow that it would never again waste the courage of young men and women like Ron Kovic. It could have prevented anyone else from writing the words that Kovic put to page when reflecting on his life before enlistment: “That beautiful boy, that body, had been destroyed, defiled, and savaged.”

In 2003, the United States invaded Iraq, again on false pretenses, and now that the war is “officially over” – though troops remain there – no one quite knows why it happened, but most do know that thousands of Americans and Iraqis died without justification. After the attacks of September 11, the “good war” was the fight in Afghanistan. Unlike the “pre-emptive strike” in Iraq, the American effort to capture and kill the forces responsible for the murder of nearly 3,000 Americans, along with those who provided moral and financial support for the massacre, had a clearly identifiable and laudable purpose…or so we were told.

In December of 2019, the Washington Post published the “Afghanistan Papers,” which revealed that from the beginning, military and political leadership knew that the war was without meaning, lacked any beneficial agenda for Americans or Afghans, and would create more problems than it solved. The few thousand members of Al-Qaeda could have been apprehended through small and measured “police actions” with special forces, such as the raid that ended the life of Osama Bin Laden. A full scale war spilling blood and treasure, by the Pentagon’s own admission, was unnecessary.

I met John Mellencamp on Memorial Day in 2017. During our conversation, with a cigarette burning away between his paint stained fingertips, he said, “I hate what Memorial Day has become. It should be a solemn day, a day of sadness and mourning. Instead, Americans barbecue and drink too much beer.”

One cannot help but wonder what else a country is capable of doing if the majority of its citizens choose to “barbecue and drink too much beer” after it becomes public knowledge that the young men and women of its military – the service personnel that they call their “heroes” – died and suffered life altering injuries for no good reason.

On May 24, 2020, the New York Times filled its entire front page with the names of Americans who have died from the coronavirus. The total is near 100,000, and will soon surpass that ghastly figure.

The studies, as damning as they are, do not provide commentary on how President Donald Trump lied to Americans for months, telling them that the virus would “go away like a miracle,” and predicting that “soon” the case count would descend to zero. The studies, which alone should end the political career of Trump and his enablers, do not scrutinize how Trump failed to replace his pandemic response team in the White House after their mass resignation months before the covid-19 outbreak, or how his administration discarded the 69-page manual that experts from the Bush and Obama presidencies prepared on how best to handle a potential pandemic.

The studies also cannot predict how many Americans will needlessly die in the coming weeks or months, because the Trump administration has ordered meat packing plant workers back to the killing floor without adequate personal protection equipment.

Like the roll call of fatalities in American wars, including the names a visitor can read on the Vietnam Memorial, most of the covid-19 dead are poor, and disproportionate amounts are black, Latino, and Native American. The stratification of suffering gives many in the white middle class, and most in the upper class, the luxury of reading the figures to simply sigh and shake their heads.

Well-intentioned liberals and leftists have objected to deployment of militaristic vocabulary to describe the coronavirus crisis. They persuasively argue that a pandemic is not a war, mainly in its requirement of empathy, sensitivity, and kindness as central to its management. There is truth in advertising, however, in America’s description of nurses, doctors, and other health care professionals as “front line workers.”

Like the members of the military, who the United States has consistently betrayed, health care workers are not receiving the support, resources, or respect necessary to save their lives. Within the past two weeks, nurses unions in Minnesota, Pennsylvania, and New Hampshire have reported shortages of PPE. A National Nurses United survey of 23,000 nurses found that 87 percent have had to reuse masks after treating covid-19 patients, and that 27 percent have had direct contact with coronavirus carriers without wearing a mask.

President Trump dismissed the concerns regarding insufficient protective gear for nurses as “fake news.” He will let them die, while his supporters applaud an act that arguably meets the criteria for negligent homicide.

Without masks or hazard pay, America can still call healthcare workers “heroes,” and the president can still organize an airshow as tribute. Throughout April and May, military planes performed tricks in the skies above the hospitals, from San Diego to Chicago, to demonstrate the country’s appreciation for medical professionals. While the fighter jets rumbled above, good people fought for their last breaths in emergency rooms and intensive care units, not unlike in Iraq, Afghanistan, and several other countries where people see American aircraft in the moments preceding the release of a bomb that will destroy their town, along with countless lives.

The airshow was a spectacle fit for a country of spectacle.

It was also a reminder of the wisdom that novelist and poet Asha Bandele best expressed in her novel, Daughter, which tells the story of a black teenager that a white police officer shoots in a case of mistaken identity. As she struggles for her life in a hospital bed, her mother remembers falling in love with her dying girl’s father, a Vietnam veteran who suffered from post traumatic stress disorder. His words come back to her with the resounding force of overhead thunder: “The United States likes to act as though it honors their dead. But if it did, there’d be a whole lot more people alive.”