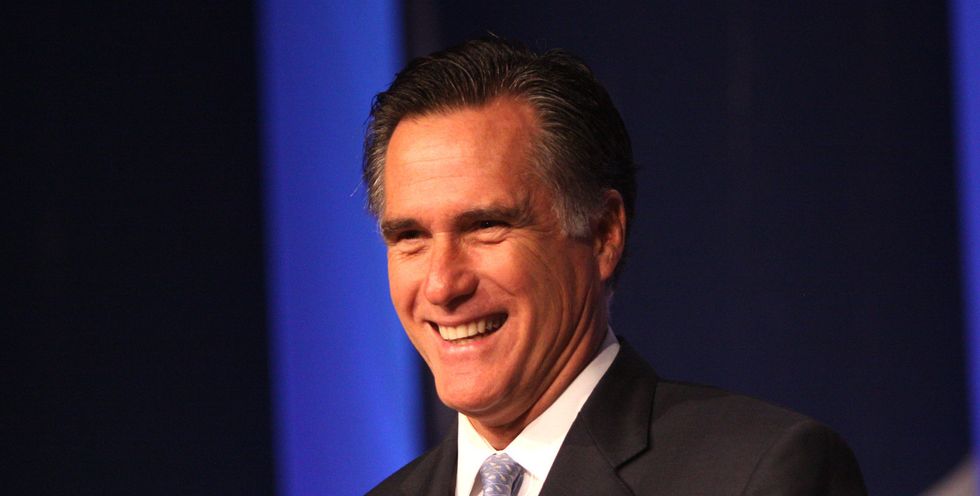 A proposal by Sen. Mitt Romney to establish congressional committees with the specific goal of crafting legislative "solutions" for America's federal trust fund programs has reportedly resurfaced in GOP talks over the next Covid-19 stimulus package, sparking alarm among progressive advocates who warn the Utah Republican's bill is nothing but a stealth attack on Social Security and Medicare.

Politico's Burgess Everett reported Wednesday that Romney's TRUST Act, first introduced last October with the backing of a bipartisan group of senators, "is getting a positive reception from Senate Republicans" in coronavirus relief discussions, which are still in their early stages. The legislation, Everett noted, "could become part of the mix" for the next Covid-19 stimulus as Republicans once again claim to be concerned about the growing budget deficit.

Max Richtman, president and CEO of the National Committee to Preserve Social Security and Medicare (NCPSSM), told Common Dreams in an interview that he is not at all surprised to see Romney's bill crop up again and said it should be diligently opposed.

NCPSSM vocally condemned the TRUST Act when it was unveiled last year, warning that—if passed—the measure "would likely result in cuts to the earned benefits of seniors, people with disabilities, and survivors."

Richtman noted that in a House Ways and Means Social Security Subcommittee roundtable discussion this week, the idea of establishing commissions to study possible changes to Social Security—though not Romney's bill specifically—was floated by GOP members, an indication that the New Deal-era program is very much on the minds, and potentially in the crosshairs, of Republican lawmakers.

"Social Security is the piggy bank that Republicans seem to go to whenever it dawns on them that we've gotta do something about the debt," Richtman said, "notwithstanding the fact that they passed a huge tax cut that added trillions to the debt and benefited mostly wealthy individuals and corporations."

Speaking to Politico this week, two Republican congressmen—Reps. Tom Reed (R-N.Y.) and Steve Womack (R-Ark.)—cited the coronavirus pandemic's possible effects on Social Security to call for a commission to study the program and recommend reforms. Rep. John Larson (D-Conn.), meanwhile, is pushing for an expansion of benefits funded by lifting the payroll tax cap, which would make wealthier Americans pay more.

"I don't know when we're going to decide to take up the issue," said Womack. "I hope and I pray that it's not when we have no other real options other than something draconian like big cuts."

Richtman warned that in the near future the public is likely "going to start hearing more and more" GOP proposals to cut Social Security under the guise of "entitlement reform" as the party suddenly rediscovers its concern for the mounting deficit.

"Obviously this is a way to push in cuts to Social Security and Medicare without leaving fingerprints, or not many fingerprints," Richtman said of the TRUST Act.

Romney's legislation—which currently has 10 Senate co-sponsors, including five Democrats—would give the Treasury Department 45 days to present Congress with a report on the federal government's "endangered" trust funds. Congress would then establish one "rescue committee" per trust fund with a "mandate to draft legislation that restores solvency and otherwise improves each trust fund program."

"If a Rescue Committee reports a qualifying bill for its trust fund program, it would receive expedited consideration in both chambers," according to a summary of Romney's bill. "While 60 votes would be required to invoke cloture for final passage in the Senate, only a simple majority would be needed for the motion to proceed, which would be privileged."

The Utah Republican's role as lead sponsor of the TRUST Act was sufficient reason for activists to raise serious concerns about the bill's intentions when it was first unveiled last year.

"The last thing seniors need is for Mitt Romney to get his hands on Social Security," Richtman said in October.

Social Security Works, a progressive advocacy group, warned in a tweet on Wednesday that the TRUST Act is "a plot to gut Social Security behind closed doors." The group told Common Dreams that it is closely monitoring Senate talks and actions related Romney's bill.

Alex Lawson, executive director of Social Security Works, said in an emailed statement to Common Dreams that "at a time when current Republican policy is to let seniors die of Covid-19 by the tens of thousands without lifting a finger to help, it is beyond shameful that Mitt Romney's focus is to rob those same older Americans of their earned Social Security and Medicare benefits."

"Romney's TRUST Act would create a fast-track, closed door commission to cut Social Security and Medicare," Lawson said. "If Republicans cared about the American people, especially seniors, they'd be passing legislation to get PPE to essential workers, help the unemployed, and rush assistance to the nursing homes that are turning into death traps."

"Instead," Lawson added, "they are focused on using this pandemic as an excuse to gut our most popular and effective government programs."