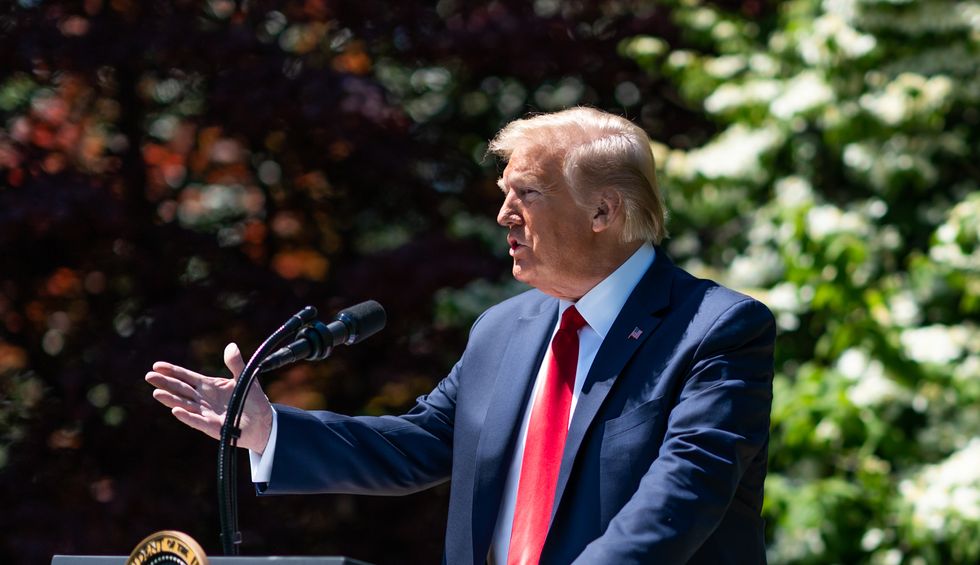 President Donald J. Trump addresses his remarks at the tree planting ceremony in honor of Earth and Arbor Day Wednesday, April 22, 2020, on the South Lawn of the White House. (Official White House Photo by Andrea Hanks)
Hunter
and
Daily Kos
May 14, 2020

The Washington Post took note of Trump's newest multiday tantrum, this one heavy on accusing a wide range of critics of crime-doing. Since Sunday, Trump "has used his Twitter account to make or elevate allegations of criminal conduct against no fewer than 20 individuals and organizations," from MSNBC host and Trump now-critic Joe Scarborough to, of course, myriad officials associated with former president Barack Obama.

But even in describing Trump's various false statements, the Post ignores the obvious dangers—the inherent threat to democracy—of an installed national leader threatening his political opponents and public critics alike with criminal prosecution. And again it is baffling, because any other nation's leader engaging in similarly punitive and authoritarian thinking would result in plain statements identifying it as such. Faced with this national leader, our press goes to great lengths to obscure the implications from their readers. Again, and again, and again, we learn that Trump is demanding his detractors and his investigators be locked up. Again, and again, and again, an American president calling for the jailing of his detractors and investigators is treated as a novelty, rather than an unforgivable sin against his nation.

Trump has been in a very foul mood in the last week, likely for the reasons already reported on: Trump is feeling "glum" because killing over 80,000 Americans through incompetence has resulted in a dip in his favorability ratings and election prospects—an outcome that, apparently, he never bothered to consider in months of insisting that the virus would simply Go Away.

The proximate cause of Trump's renewed calls for treating critics as criminals, though, appears to have been his furiously loyal attorney general, William Barr, moving to erase the prosecution of former Trump national security adviser Michael Flynn outright. Trump seems to have gained new confidence Barr will indeed launch new criminal probes of Trump's enemies, and he has been listing a string of likely targets—namely anyone Trump is mad at during any particular hour of his day. It is also likely, based on Barr's past acts and various hints, that Barr himself will soon be threatening such things.

The press continues to brush Trump's threats aside as theatrics—but the theatrics matter. They have goals, and a purpose. They are intended to punish critics, and to sow false information to the public. They are meant to stoke anger and conspiracies among supporters of the "leader." To immunize him, in the public eye, from rampant reports of crookedness and self-dealing. To make government investigators recoil from probing such reports, and to either directly oust those that do or sow accusations that in conducting those investigations, they have proven themselves enemies of the nation.

This is what Trump is currently doing, and what he has done. It is plain fact. Trump uses false accusations of criminal conduct to target those who oppose him. In his installed position as national leader, surrounding himself with those willing to give credence to those accusations, his actions are authoritarian.

The press continues to brush those threats aside, even while noting that they are escalating. By painting his acts with rote neutrality the press is hiding from the public the extent to which Trump's behavior is at odds with every American and democratic premise. No, we do not jail government officials who examine potential wrongdoing by our leaders. No, we do not give credence to leaders' claims, when confronted with public reports of government corruption, that those who uncovered and publicized those corrupt acts are "Enemies of the People."

We didn’t until one of the two parties adopted, for mere expediency, the tools of decompensating narcissism as their own. Now authoritarian claims are seen as mere partisanship; threats to "lock up" those that investigate the party's leader, or those who mount a political campaign against him, or those that report on the leader's acts in an unflattering light are not obvious assaults on fundamental pillars of democracy, but reported as the rhetorical flourishes of an "unusual" new figure.

Trump is targeting political critics, the press, and disloyal government officials with false accusations of criminality in order to remove each of them as obstacles to his own ambitions and need for universal flattery. Say it. Identify its implications—write it as if it were happening in Europe, or Asia, if you must. And deliver a judgment.

Yes, a judgment. The press does not muse over whether murder is bad or is merely an alternative social approach. The press does not mew that bribe-taking is simply a product of a new politician's novel approach. The press itself insists it is a "watchdog" against corruption, but here it refuses to bark. It says democracy dies in darkness, but refuses to shine too bright a light on the acts that might kill it. It is left to the public imagination whether the precise rhetoric and rescribbling of laws that signals plain authoritarian intent in all other times and places ought to be interpreted the same way now, and here.

What is the point, then? What is the public value in reporting that the "leader" has relentlessly and falsely accused his political foes of not just lawbreaking, but treason, if the public is told that nothing in particular should be taken from that?

I could not be a reporter, I know that. I can make the value judgment: Trump's actions violate the democratic compact. He is undermining our nation. He is weakening the rule of law only for the cheapest of personal gains, and using tools cribbed directly from the most corrupt of regimes to do it. It does not matter whether it is intentional or just the outcome of a sloshing mind that can see nothing but itself. It still counts, whether he does the damage from a place of malevolence or of stupidity.

Any single one of these Trump statements would have been a national scandal in any year before the one in which Republican lawmakers announced that this behavior was now “presidential” under a new definition. Trump's acts against Ukraine alone would have ended every past presidency—without question—until the moment his party declared that such blatantly corrupt acts were now “allowed.”

What should we take from that? The rules changed, then, merely because the halfway point between national leaders should not threaten their political enemies with imprisonment and on the other hand is now in a drastically different place? The press has no choice but to row to that new center, and damn the current?

The Trump administration is authoritarian in rhetoric and in action. Trump has installed officials who are nullifying cases brought against his allies, even when the crimes are clear and the evidence unambiguous, while ordering new investigations of those who did the probing. Former justice officials aren’t conflicted as to what this means. Historians and international experts are in broad agreement as to what this means. Officials from past administrations, from both parties, have spelled out exactly what this means. There is no controversy here.

Say it, then. Hold a meeting, editors, and tell the public not just that democracy dies in darkness, but what it dies from. Where that knife is. Who holds it, and why.