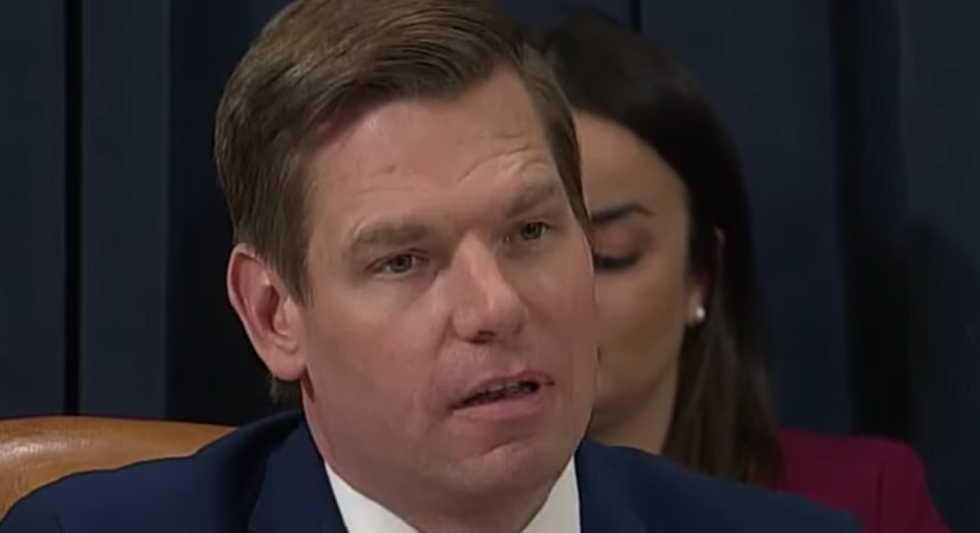 It all started last week when Rep. Swalwell said he didn’t trust Grenell, who was stepping down both as Trump’s Ambassador to Germany and as his acting DNI, after the Senate confirmed now-former Congressman John Ratcliffe. (Ratcliffe is legally ineligible to hold that position, but Senate Republicans confirmed him anyway.)

I’m letting the public see more info. You are the one who worked to hide the information you didn’t like. You liste… https://t.co/xwOsW3r5ty
— Richard Grenell (@Richard Grenell)1590163495.0

And Swalwell slammed him for not doing his job, and taunted him for not releasing trump’s first National Security Advisor Mike Flynn’s transcripts/calls with Russian agents.

Thanks for showing up on Twitter. You never once came to brief the Intel Committee (First DNI Director who failed t… https://t.co/Ljsiu32SlA
— Rep. Eric Swalwell (@Rep. Eric Swalwell)1590163926.0

Grenell insisted the transcripts/calls would be released.

Those are coming. It’s very important for the public to see ALL of them. For too long the public has been misled. J… https://t.co/IxiMfqSJCY
— Richard Grenell (@Richard Grenell)1590164808.0

Swalwell waited. Grenell is no longer DNI (although he is joining the Trump re-election campaign.) Swalwell slammed Grenell. “Tick tock.”

And Swalwell hit back again, accusing Grenell of enabling the guy who spread “Russian propaganda” and “asked Russia to hack his opponent,” Donald Trump:

And then Swalwell schooled Grenell on actual facts, like Democrats were in the minority during the Russia investigations, and hit him with “show us the Flynn tapes or buzz off.”

Weaponize? History lesson: Democrats were in the minority for the Russia Investigation — it was a GOP-led investiga… https://t.co/s8Gb3U6Ut9
— Rep. Eric Swalwell (@Rep. Eric Swalwell)1590680891.0

More facts from Swalwell, facts the right likes to forget:

This is so comical. The Republicans led the Russia investigation, which ended in March 2018. They chose to not rele… https://t.co/vhhQWmPXza
— Rep. Eric Swalwell (@Rep. Eric Swalwell)1590684463.0

The battle is still going on.

Here’s what some are saying now that “Swalwell” is the top trending topic on Twitter right now:

@RepSwalwell @realDonaldTrump Mr. Swalwell, I do not live in your state, but am proud you represent the country in… https://t.co/9vTpVfLKE9
— Ryan P. Dunkaroos (@Ryan P. Dunkaroos)1590673878.0

@blakesmustache @RepSwalwell @realDonaldTrump @HillaryClinton The funny thing about this is the Grenell is privy t… https://t.co/LcGp5DF5HD
— Put A Mask On It (@Put A Mask On It)1590683306.0