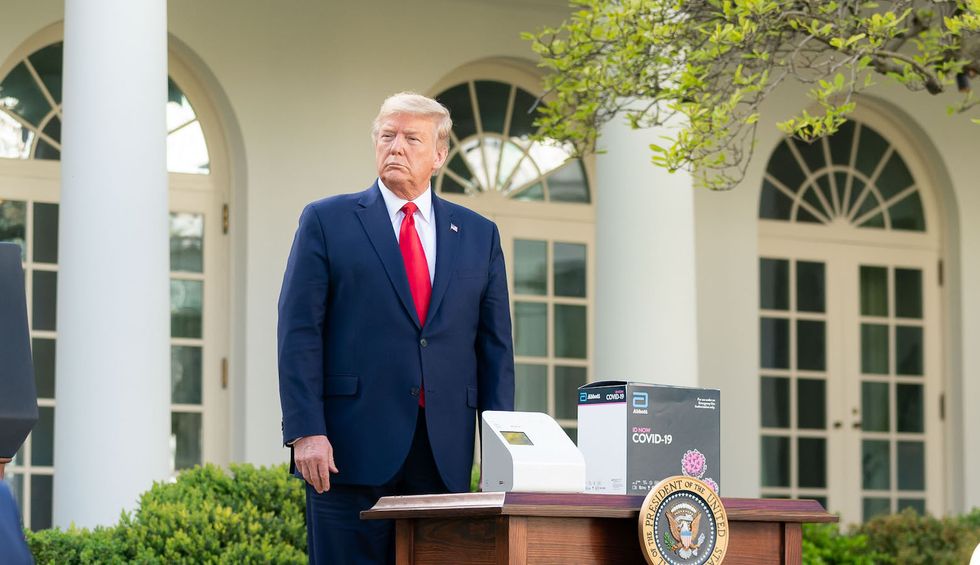 Cartoonist Nick Anderson recently put an anti-Trump cartoon, titled “The Trump Cult,” up for sale on the e-commerce site Redbubble — which temporarily removed it following a complaint by President Donald Trump’s reelection campaign. And Anderson is speaking out about the incident.

Anderson’s biting cartoon depicts Trump supporters as mindless and unquestioning. The supporters are shown wearing red MAGA hats while Trump is serving them a combination of chloroquine, Clorox bleach and Kool-Aid.

The Kool-Aid part was a reference to Jim Jones’ massacre in Guyana in 1978, when the cult leader’s followers’ drank Cyanide-laced Kool-Aid after the cult leader commanded them to. The slang expression “drinking the Kool-Aid” has come to be used as a metaphor for mindlessly accepting whatever once is told, which is how Anderson obviously views Trump’s supporters. And the cartoon also alluded to Trump’s promotion of the anti-malaria drug hydroxychloroquine as a possible treatment for COVID-19 and his suggestion that bleach should be ingested to prevent coronavirus.

In response to the cartoon being placed on Redbubble, Trump’s campaign claimed that its depiction of MAGA hats was a trademark infringement — and Redbubble temporarily quit selling it. Anderson tweeted, “We live in a strange time when the #POTUS can falsely accuse someone of murder with impunity (violating @Twitter’s terms of service), while at the same time bully a private business into removing content it doesn’t like.”

Anderson, in that tweet, was referring to Trump promoting the nonsense conspiracy theory that Never Trump conservative Joe Scarborough (who co-hosts “Morning Joe” on MSNBC) murdered a former employee when, in 2001, he was serving in the U.S. House of Representatives. The employee, Lori Klausutis, suffered from a heart condition, and an autopsy performed after her death showed no signs of foul play; Klausutis died when she fell and fatally hit her head — and her widower, Timothy Klausutis, has implored Trump to let his wife rest in peace and quit promoting a ridiculous conspiracy theory.

We live in a strange time when the #POTUS can falsely accuse someone of murder with impunity (violating @Twitter's… https://t.co/X1ysuh8huH
— Nick_Anderson_ (@Nick_Anderson_)1590534825.0

Redbubble started selling Anderson’s cartoon again after determining that there was no trademark infringement involved.

The Comic Book Legal Defense Fund and other organizations spoke out on Anderson’s behalf, asserting in a letter that Trump’s campaign “misused Redbubble’s reporting mechanism to suppress protected political expression in the form of parody, critique and satire.” And Redbubble, after deciding to start selling the cartoon again, stated, “We sometimes make mistakes, as we did here.… We’re sorry for any inconvenience this has caused.”

The Guardian quotes Anderson as saying, “I doubt anyone had even seen it yet on the site. This reveals that the Trump campaign has a system in place, trawling for material they find objectionable. If it happened to me so quickly, it likely has happened to others. How much other content has been removed this way on Redbubble and other sites?”

Anderson went on to say, “It must be pointed out: the president of the United States is a hypocrite who complains about the ‘violation’ of his free speech on Twitter, then tries to actively suppress the free speech of others. These are actions of an adolescent wannabe-authoritarian.”