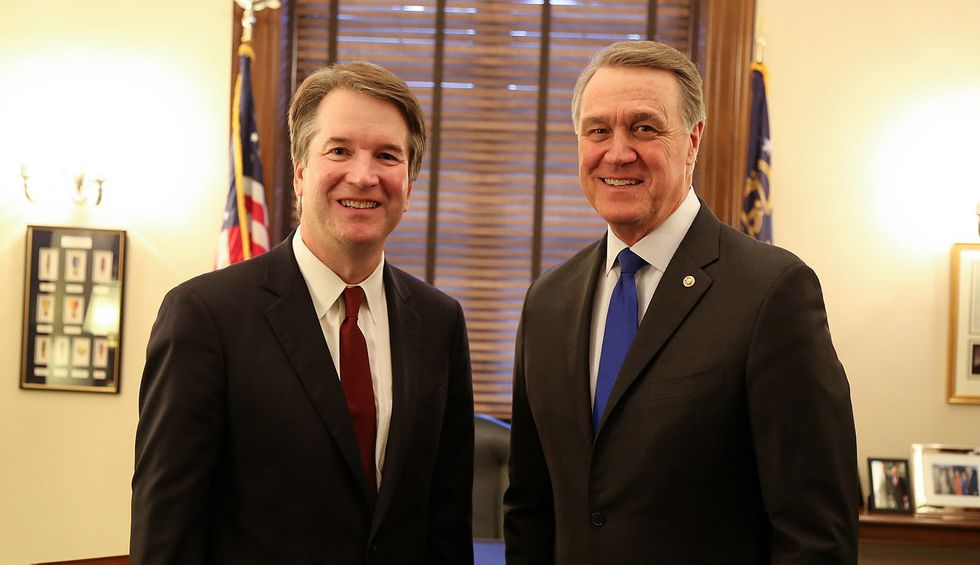 The Republican pollster Cygnal is out with a survey of each of Georgia’s 2020 U.S. Senate races for the Georgia House GOP Caucus, and it shows both Republican incumbents in real danger. Sen. David Perdue leads Democrat Jon Ossoff 45-39 in the contest for a regular six-year term, while an unnamed third-party candidate takes 4%. The poll’s sample also finds Donald Trump leading Joe Biden 45-44 in a state Trump carried 50-45 four years ago.

Respondents were also asked about the November all-party special election contest for the other Senate seat. GOP Rep. Doug Collins is in first with 29%, while Democratic businessman Matt Lieberman takes the second place spot in a likely runoff with 12%. Pastor Raphael Warnock, who has the support of national Democrats, and appointed GOP Sen. Kelly Loeffler are just behind with 11% each, while a third Democrat, former U.S. Attorney Ed Tarver, is at 4%. The state House GOP caucus is led by Speaker of the House David Ralston, who is a major Collins ally.

This is the first poll we’ve seen all year of Perdue’s race for a second term, and Cygnal only tested Ossoff, who was Team Blue’s nominee in the ultra-expensive 2017 special for the 6th District against the incumbent. Two other notable Democrats—2018 lieutenant governor nominee Sarah Riggs Amico and former Columbus Mayor Teresa Tomlinson—are also competing with Ossoff in the June 9 primary, but Ossoff ended March with a large cash on hand lead over both his rivals. If no one takes a majority of the vote, the Democratic nomination would be decided in an August runoff.

As we noted above, an unnamed third-party candidate takes 4%, and this sort of showing could potentially make a huge difference this fall. That’s because the state has an unusual law that requires candidates competing in the November general election in every race besides president to take a majority to avoid another runoff. Confusingly, the runoff for state-level general elections is set for Dec. 1, while the second round for federal general elections is on Jan. 5, 2021.

In past cycles, Democratic turnout has disproportionately suffered during the second round of voting: In 2008, for example, Democrat Jim Martin trailed in the first round of Georgia's 2008 Senate race by just 3 points yet lost his runoff by 15. However, there’s no guarantee Democrats would face this kind of disadvantage if this cycle’s Senate contest went into overtime. In 2018, Democrat John Barrow went from a 0.4% deficit in the November contest for secretary of state to a 3.8% defeat the next month—still a clear move in the wrong direction, but not nearly as dramatic as what happened to Martin a decade before.

If there is a runoff here, turnout on both sides may also be impacted because the special election for the state’s other seat is all but certain to go to a second round on Jan. 5. Georgia special election rules require all candidates to face off on one ballot, and if no one takes a majority then the two candidates with the most votes, regardless of party, will compete in a second round of voting. Because there are just so many candidates in this special it’s almost impossible for anyone to win outright in November.

However, Cygnal’s special election portion does give Democrats reason for concern. While GOP Rep. Doug Collins is far ahead, there’s essentially a three-way tie for the second spot between appointed GOP Sen. Kelly Loeffler and two Democrats: Matt Lieberman and Raphael Warnock. If those results are on target, that means there’s a real chance that both Collins and Loeffler could advance to January, a result that would automatically keep this seat red and also potentially harm Democratic runoff turnout for the other Senate race.

The good news for Loeffler’s detractors on both sides of the aisle is that the appointed senator has attracted the wrong kind of attention ever since the Daily Beast reported in March that she had liquidated a number of assets just before the markets tanked as the coronavirus pandemic worsened. Collins released polls in the following weeks showing her to be wildly unpopular, and this new Cygnal survey also shows her struggling: The incumbent posts an awful 20-47 favorable rating, while Collins is on positive ground at 32-22. (Numbers were not released for any of the Democratic candidates.) We haven’t seen any data from independent pollsters in months, though.

No one has run TV ads yet attacking Loeffler over her transactions, which she’s insisted were made by “third-party advisors without her knowledge,” but that may change soon. Great America PAC, which backs Collins, recently went up with digital ads attacking Loeffler on the topic, and Fox writes it “plans to release the ad digitally in Georgia in the next few weeks before buying TV spots for the ad as well.” Altogether, the group says it plans to spend seven figures here.

Loeffler, though, does have more than enough personal wealth to fight back and go over both Collins and her Democratic opponents. The incumbent, who has self-funded more than $10 million so far, ended March with a $6.1 million to $2.2 million cash on hand lead over Collins, while Warnock had $1.2 million in the bank. The other two Democrats, Lieberman and Tarver, had $309,000 and $41,000 to spend, respectively.