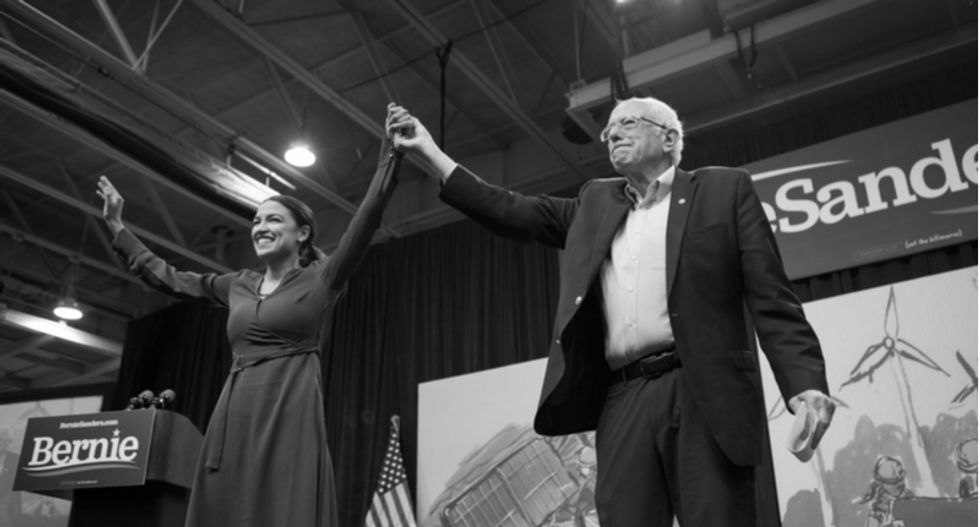 Most of the left's analyses of Bernie Sanders second primary loss do not attempt to answer why his campaign failed to gain traction. They are premised on the notion that Sanders represented a generic candidate of the left, assume that the Democratic base was with him and his greatest challenge was overcoming a hostile Democratic establishment and take it as a given that any other leftist would have faced the exact same challenges.

But a presidential campaign is an amalgamation of thousands of decisions, great and small, which ultimately determine its success or failure. How a campaign is rolled out, whom a candidate chooses to act as surrogates, what overarching themes and specific messages they push, their policy agenda, their media strategy and their scheduling--all are choices specific to a campaign and there is no reason to assume that another candidate with a similar ideological perspective would replicate them. In fact, it's more likely that another leftist would learn from Sanders' two failed presidential campaigns and do some things differently.

Hindsight is 20/20, and without attempting to offer a comprehensive post-mortem, there are a few decisions the Sanders made that, say, a member of The Squad might not make in a future election stand out.

Last April, Edward-Isaac Dovere reported for The Atlantic that Sanders’ strategy rested on holding onto his loyal base in a large and fractured Democratic field. At the time, Sanders’ aides believed that he “would easily win enough delegates to put him into contention at the convention,” reported Dovere. “They say they don’t need him to get more than 30 percent to make that happen.” This struck me as a pretty poor strategy at the time. Why assume that the field would remain divided deep into the primaries? In the end, taking it as a given that he would hold his entire 2016 base proved to be a serious error as a quarter of those voters went for Warren this time around, according to a poll conducted in January.

Two major, perhaps fatal, strategic errors may be related to that theory of the campaign.

First, Sanders explicitly ran another campaign as an outsider battling both the Democratic and Republican establishments in a cycle in which poll after poll--and three years of interim elections--made it clear that most of the Democratic base was intensely focused on defeating Trump and the GOP. The campaign also emphasized its unabashedly progressive agenda when surveys showed that most Democratic voters prioritized choosing a candidate who was most likely to defeat Trump over one whose policies they liked. These choices might not have been bad if the field had remained crowded and they only needed to win over enough votes to secure 30 percent of the delegates.

Relatedly, they engaged in a debate about whether a candidate who secured a plurality of delegates should become the nominee when they should have aggressively tamped that whole conversation down. (They just had to say, 'we're focused on winning a majority of delegates and won't engage in hypotheticals like this in February.') Studies have found that drawn-out, bitterly contested primaries hurt a party's chances in the general elections that follow.

The prospect of an ugly contested convention freaked out a lot of Democrats and probably played a significant role in Amy Klobuchar and Pete Buttigieg deciding to drop out before Super Tuesday and endorse Biden. (Many progressives are convinced that the establishment coerced or incentivized them to get out, but the evidence for that is thin. It's mostly based on a New York Times report (with a sensational headline) that Obama had had conversations with the candidates and told Pete Buttigieg that he would never have more leverage over Biden's potential presidency than he would if he got out at that point. The report noted that Obama had consulted with Sanders himself repeatedly.)

When a rather stupid media controversy broke out over Sanders' past praise for a Cuban literacy program, the campaign again chose to accept their terms for that debate. They stressed that Sanders had condemned Fidel Castro's treatment of political prisoners and that other prominent figures had also lauded Cuba's educational system. I believed at the time that they should have used the opportunity to hammer home the fact that Sanders is a European-style social democrat and all of that blather about socialist governments in Latin America and the Caribbean were nothing more than a red herring.

For that matter, there is no law requiring candidates from the left flank of the Democratic coalition to identify as democratic socialists. No rule forces them to identify as independents. The late Minnesota Senator Paul Wellstone always said he was from "the Democratic wing of the Democratic Party." Many progressives identify as "FDR Democrats." We can't know how a candidate who better balanced his or her criticism of the party's moderate leadership with support for the party as a whole, like AOC and others do, would have fared.