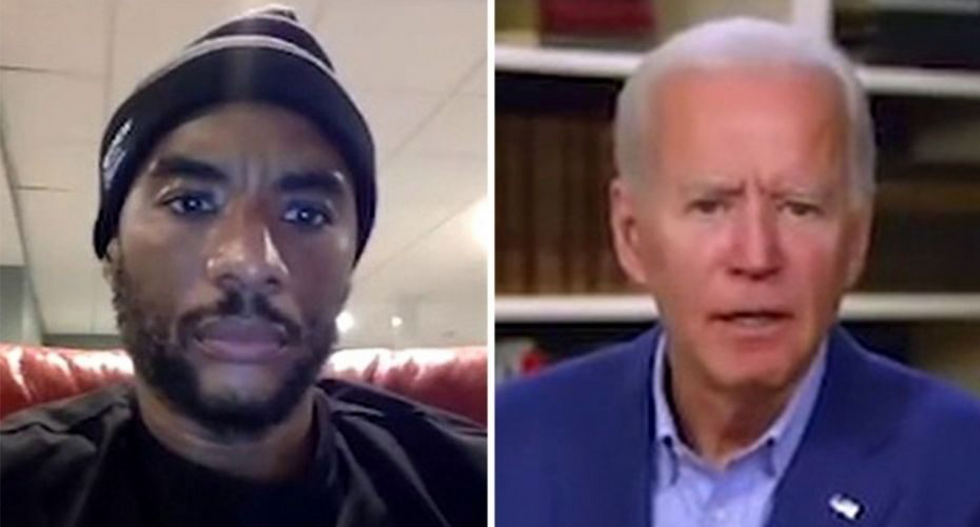 On Friday, Joe Biden highlighted a maddening double-standard on the part of the press when he told a podcast host, “if you have a problem figuring out whether you’re for me or Trump then you ain’t black." When Donald Trump says the nastiest, most offensive things, reporters see it as a dog-bites-man story--just Trump being Trump--and his outrageous rhetoric gets only perfunctory coverage. Biden is just as well-known for lacking a filter and having a propensity for "gaffes" as Trump is for his naked bigotry, but when he makes a cringe-worthy comment, it isn't similarly dismissed as Biden being Biden, it becomes a three-day story and the subject of hours of cable news coverage. (That same relentless focus on Hillary Clinton's "scandals," while largely giving Trump a pass on his own, marked the legacy media's disastrous coverage of the 2016 election, according to researchers at Harvard University.)

But the Biden campaign also handled it poorly. This was a test of how everyone would react to an inartful joke, and they failed it.

Later that day, Biden apologized for the remark, saying, “I shouldn’t have been so cavalier.” Apologizing makes you look weak and lends credence to the idea that you did something terribly wrong. The reality here is that Donald Trump enjoys the support of 3 percent of African-Americans in the latest Quinnipiac poll. And nobody who supports him has any standing whatsoever to criticize anyone else for a clumsy, racially insensitive remark.

But it's the missed opportunity that's really problematic. Team Biden needs to learn a thing or two from Trump, who never apologizes and instead always parries criticism with often vicious attacks--attacks on his political adversaries, the press, the Deep State, etc.

Biden should have done what Trump would have and gone on offense by turning the criticism back on his opponent. He might have said something like this:

Republicans have only themselves to blame for making their party toxic among people of color. It's not Joe Biden's fault that they've pursued a racially divisive 'Southern Strategy' for the past 40 years instead of trying to appeal to more black voters.

He might have offered a perfunctory non-apology, but then he should have pivoted to Trump's own lengthy record of racism, religious bigotry and xenophobia.

Let's get serious here for a second. Look, I know there are a small handful of African-Americans who support Trump, and I'm sorry if they were offended, but just look at all the guys waving Confederate flags at Trump's rallies. Come on, man, Minnesota wasn't part of the Confederacy! This is obviously just a distraction from his own deadly failures--for the tanking economy and 100,000 dead Americans.

Look, the Department of Justice found that Trump violated the Fair Housing Act by refusing to rent apartments to black people. He lied to them and said there were no vacancies when there were apartments available. He brought full-page ads in New York newspapers calling for a group of innocent black teenagers to be executed for a crime they didn't commit. Let's get real here, the guy was a Birther who spread racist conspiracy theories about the first African-American president--a guy I was proud to work for eight years--being a Kenyan fraud. He told  four black members of Congress--four black women he doesn't like---to go back to the "corrupt" countries they came from.

And it's not just the black community that Trump attacks. He said Mexican immigrants trying to earn a living for their families were rapists. He wanted to ban Muslims from entering the country. He called a Latino judge who was born in Indiana "Mexican," and claimed that he couldn't be impartial. He mocks Native Americans, blames China for his disastrous failure to respond to this pandemic, casually promotes anti-Semitic stereotypes and calls non-white countries "shitholes."

If anyone owes the African-American community--and all communities of color--an apology, it's Donald J. Trump.

Democrats should never allow themselves to be lectured about racial insensitivity by anyone associated with the party that embraced Trump.

Joe Biden is infamous for saying these kinds of cringe-worthy things. There will be other, similar gaffes over the coming months. He and his advisors better learn how to play this game or Trump and his allies will frame the coverage of these kerfuffles and just walk all over them.