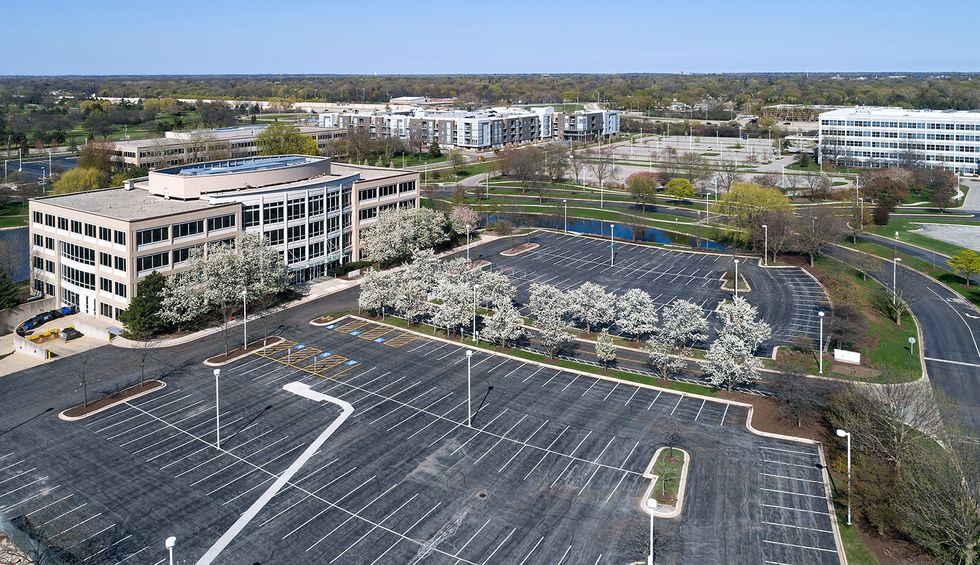 When Kmart bought Sears in 2005, the retailer famous for its blue-light special sales left its longtime corporate home in Troy, Michigan, to move to Hoffman Estates, the headquarters of its new acquisition.

Built in 1972, Kmart’s former headquarters, dubbed Fort Kresge, consists of a clutch of low, interlocking buildings of dark steel and mirrored glass. Brick towers loom in between them. Its nickname combined the campus’ fortresslike appearance with the surname of company founder Sebastian Spering Kresge.

In its heyday, Fort Kresge teemed with 5,000 employees and was filled with works of art, including a rare tapestry by Pablo Picasso and a 15th-century Ming Dynasty watercolor on silk. But after the merger, almost everything was auctioned off — artwork, furniture, even office equipment.

Vacant since 2006, Fort Kresge’s years of decay are plain to see: boarded-up doors and broken windows, pocked walls and peeling ceilings, and vast hollowed-out rooms, some still containing musty office equipment or littered with debris. A redevelopment plan never got off the ground and a private developer purchased the land at a discount. Deemed by Troy’s city assessor as “functionally obsolete,” the mothballed campus on 40 acres is considered well beyond a fixer-upper; it’s a complete teardown.

Over the years, Kmart’s languishing campus has burdened the Detroit suburb. Its extended vacancy has not only left a void in Troy’s commercial business heart, but it has strained the city’s coffers as well. The longer the office park sat vacant, the more its taxable value plummeted, taking a big bite out of the local property tax rolls.

Sears sold off the building and the land surrounding it in 2007. Plans for its redevelopment have since stalled.

Fort Kresge’s assessed value has sunk by more than half over the decades, according to city records, from $27.6 million to $12 million. The owners paid $311,000 in taxes last year, 68% less than in 2002, when Kmart employed thousands in Troy.

Sites such as Kmart’s old headquarters are known as “big empties” — sprawling, once-trendy corporate campuses left behind in the suburbs as companies increasingly relocate to urban centers.

In just the last several years, McDonald’s, Motorola Solutions and Kraft Heinz, among other companies, have left their suburban offices to move into downtown Chicago to attract millennial workers who often prefer more urban environments. New technology has made it easier to work from home and lessened the need for employees to gather in a single, central location.

The Sears campus in Hoffman Estates may be following the path of its sister campus in Troy — a Fort Kresge for the future.

Long before the coronavirus pandemic struck, the Sears’ security hut at Sears Parkway and Trillium Boulevard was abandoned. Parking lots that once held thousands of cars were almost deserted. A fountain that once sprayed water several stories high was shut down to save money.

Inside the sprawling, 2.4 million-square-foot headquarters — composed of seven interconnected office buildings — there is an almost eerie ghost-town quality, former employees describe. The bank, dry cleaners, hair salon, coffee shop and small sundry shop that once lined the corridor of the main atrium have all closed. Gone, too, are the Sbarro’s and Panda Express restaurants.

Over the years, Sears has hired leasing agents to bring in sublessors without much success. Today, with the economy uncertain and Sears’ days seemingly numbered, the building has become an even harder sell. Only about 3% of the complex is leased to outside tenants.

“It looks like somebody pulled the fire alarm,” as one former longtime employee, who was laid off in 2018, describes it. The employee requested anonymity because he still works in the retail industry.

Hoffman Estates officials said they are certain that the campus will be redeveloped — even if Sears departs the village.

“The Sears campus is a beautiful building,” Hoffman Estates Mayor William McLeod said. “I’m sure they’ll be some use made of it. It’s not uncommon as time goes by that trends in business change dramatically. ... Someone will come in with an idea. And those buildings will be utilized.”

It is unclear what plans Sears has for its headquarters as the company struggles to survive. The fate of the site lies in the hands of hedge fund operator Eddie Lampert, the former Sears CEO who bought the company’s assets after it declared bankruptcy in late 2018. His new company, Transformco, owns the campus and an additional 120 undeveloped acres.

If Transformco tried to sell the campus, it would face long odds, local real estate experts said. The large complex, custom-built for Sears, is nearly 30 years old. Suburban business parks are as outdated and obsolete as fax machines.

Office vacancy rates in the Northwest suburbs stand at around 19%, compared with 11.8% downtown and 13.3% across the Chicago suburbs, according to Costar, a commercial real estate company.

The vacancy rate in Hoffman Estates is at 30% — one of the highest figures in suburban Cook County. Empty office space in the Sears headquarters and the former AT&T campus account for more than half of the vacancies.

The entire region is a buyer’s market, burdened by other big empties. Right down the road from Sears headquarters are two such examples.

Allstate Insurance Corp. moved out of its 530,000-square-foot office complex in 1992. It went unsold and sat vacant until 2012, when Allstate demolished the building. The taxable value of the property has plunged from $14.7 million in 2009 to $106,000 in 2019. Last year, Allstate’s property tax bill was less than $15,000. Today, the 62-acre former corporate campus on West Higgins Road in South Barrington is an empty field.

Five miles east of Sears, along the tollway in Hoffman Estates, is the site of the former AT&T campus. Built in 1991, the three-building, 150-acre campus was deserted in 2014, when AT&T began moving its 3,000 workers to smaller offices in Chicago and other suburbs. It became completely vacant in 2016. In the last five tax years alone, the amount of taxes collected from the property declined from $7.7 million to $1.4 million.

A new plan seeks to rejuvenate the site by turning it into a self-contained virtual city — called a “metroburb” by developers — with offices, stores, restaurants, hundreds of apartments and townhouses.

It is unclear whether the new project will work out. But McLeod pointed to it as an example of how to turn big empties into thriving new ventures.

“AT&T is being restructured,” McLeod said. “We’re very excited about the ‘metroburb’ there.”

Given the bad timing and real estate headwinds, one of two fates awaits the Sears headquarters, experts say: It will sit empty for several years, or it will face the thud of the wrecking ball.

“It’s a nice building. It still looks nice,” said Brandon Svec, a director and economist at Costar. “But where’s the demand? There’s no one looking to take on 2.3 million square feet in the suburbs right now. There just isn’t the market demand for it to justify its existence.”

For Hoffman Estates, the loss of its biggest taxpayer would be a blow to the city’s finances.

For decades, Sears has captured tax revenue from a special district drawn around the campus designed to keep the company in town. Under the terms of the agreement with Sears, the village receives a guaranteed $5 million per year, roughly 5% of its annual budget. That has added up to $30 million since 2014.

But Sears’ departure would put an end to the special tax district. The village and other local government agencies would regain control over the taxes it generates. But without a new tenant, the value of the land would most likely fall, dragging tax revenue with it.

Sears’ corporate complex has already been sharply depreciating for years, on the same downward trajectory as the company’s stock price. In 2013, the headquarters had an estimated market value of about $150 million. Its current value, according to the Cook County assessor’s office, is about $50 million — a decline of two-thirds in only five years.

Even though vacant properties remain on the tax rolls, their assessed values plummet. It doesn’t take long for them to become Fort Kresges.

If that happens, Hoffman Estates will have to provide municipal services like road repairs and police and fire protection with diminished property tax revenues. For residents, that likely means a tax hike or cuts to services.

None of this was imaginable in 1989 when Sears was the nation’s mightiest retailer, the “Everything Store” that would be around forever — a business that was, to steal a popular phrase from another industry, too big to fail.

But with Sears’ collapse considered now not a matter of if but when, Hoffman Estates officials are grappling with what the village’s future might look like without the company.

The village commissioned a study in 2018 to refashion the Prairie Stone business park and the Sears Centre entertainment district, as well as three other large tracts adjacent to Prairie Stone.

Altogether, the new economic plan covers an area of 1,650 acres and suggests a number of mixed uses, including a variety of residential choices, office spaces, restaurants, shops and lively parklike recreational spaces.

The plan does not say how it will be funded or who will develop it.

It also says nothing about the elephant in the room: Sears’ headquarters complex.