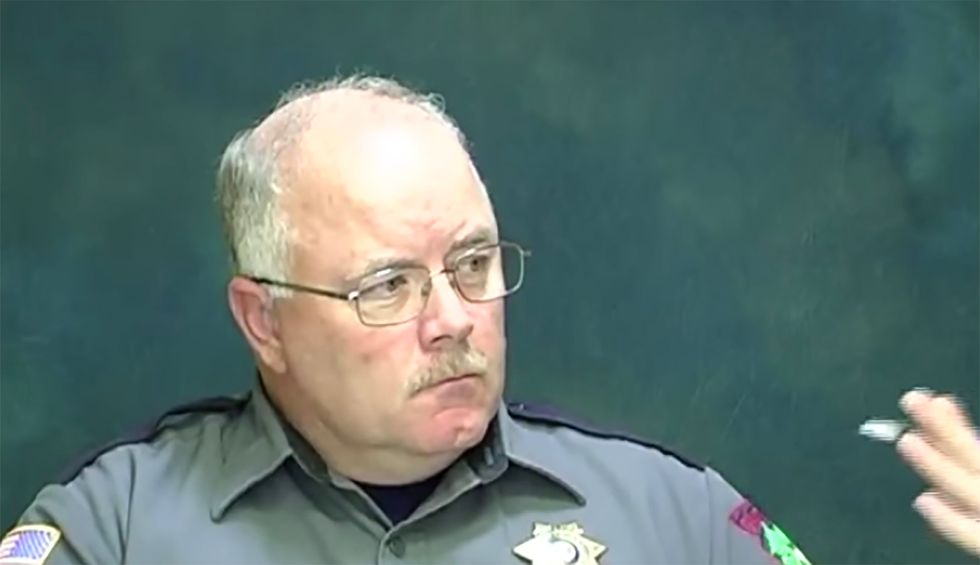 Image via Screengrab.
David Neiwert
and
Daily Kos
May 03, 2020

Having a sheriff who believes he himself—not the federal government, not the state—is the supreme law of the land in the county where you reside is probably always going to present problems for people who understand basic civics.

For the residents of Grant County, Oregon—where the biggest city, John Day, is home to some 1,700 people, and massive swaths of its land are under the administration of the federal government—that’s been an ongoing situation for the past four years, ever since their sheriff, Glenn Palmer, became a central player in the drama unfolding in neighboring Harney County, where a band of “Patriots” led by Ammon Bundy had seized control of the Malheur National Wildlife Refuge.

As an Oregon Public Broadcasting report explored this week, Palmer’s continuing rule of the county has become a nightmare for anyone who dares oppose him politically, including a man named Gordon Larson, the former head of the Oregon State Patrol in the region and a fellow Republican—one who says he wants nothing to do with the sheriff’s political extremism.

For standing up to him, Palmer has made Larson pay. Anyone else who lives in the county—even dispatchers from the city of John Day police department—who has crossed him has tasted Palmer’s various forms of revenge.

Palmer came under investigation in 2016 for his role in the Malheur standoff. Due to his long history of involvement with the antigovernment “constitutional sheriff” movement—Palmer was “lawman of the year” in 2012 for Richard Mack’s Constitutional Sheriffs and Peace Officers Association, and made numerous speeches and appearances on CSPOA’s behalf in ensuing years—he was approached by leaders of the Malheur takeover about becoming involved, but he initially declined.

Mack’s organization—which has a long history of association with the Bundys—claims that the U.S. constitution grants sheriffs, and not federal or state officers, powers as the supreme law of the land. These powers include the ability to annul federal and state gun-control and land-use laws.

Despite rebuffing their initial plea, Palmer praised the occupiers as “patriots” in the local press, and met with some of them in a local café. He agreed to help organize a gathering of the Malheur militants, including leaders Ammon and Ryan Bundy and others, in the town of John Day (the county seat) on the evening of Jan. 26. It was as those people were en route to that gathering that afternoon that they were arrested by an FBI-led law-enforcement operation, and militant LaVoy Finicum was shot to death while resisting arrest.

Palmer’s role—or lack thereof—in that operation first raised attention to his behavior: The John Day city dispatcher handling Palmer’s radioed request for information about the Malheur arrests hesitated initially, because Palmer was considered “a security leak, not only by local law enforcement including his own staff, but by the Oregon State Police and the FBI.”

"I felt uncomfortable knowing that I had to relay vital and confidential information to someone who may not be trustworthy," the dispatch manager, Valerie Luttrell, later explained to her supervisor.

In fact, it shortly emerged that Oregon State Police had originally planned to make the arrest in Grant County, but moved the location of the planned traffic stop to Harney County to avoid dealing with Palmer.

Eventually, not only was Palmer cleared by the Department of Justice, he also was handily reelected sheriff, and his brother elected county commissioner. After the investigation opened, however, it emerged that Palmer had been using the power of deputization to create a private armed force comprised of his political supporters—and he gave them tremendous powers, including the ability to harass his enemies.

These “special deputies” were not officially cleared to receive secure law-enforcement information from the dispatch system, which caused a problem for John Day dispatchers. Sean Hart, a reporter for the local Blue Mountain Eagle, searched local records and found that Palmer had hired about 70 such “special deputies.”

Hart reported that public records showed Palmer had deputized seven people as deputies, seven as reserve, five as search and rescue, six as corrections, one as chaplain, nine as special deputies, three as land use deputies, 11 as public lands patrol, nine as public lands deputies, one as limited to concealed handgun license and 11 as a natural resource committee.

Gordon Larson, as OPB recounts, ran afoul of one of these “special deputies” while he was running for the county commission, against Palmer’s brother. Two of these “deputies” filed affidavits against his water rights, and Palmer himself accused Larson of timber theft. He lost by a wide margin.

At one time, the rural folk of Oregon were celebrated for their good common sense and their strong democratic values. In Grant County, at least, the bullies have taken over instead.