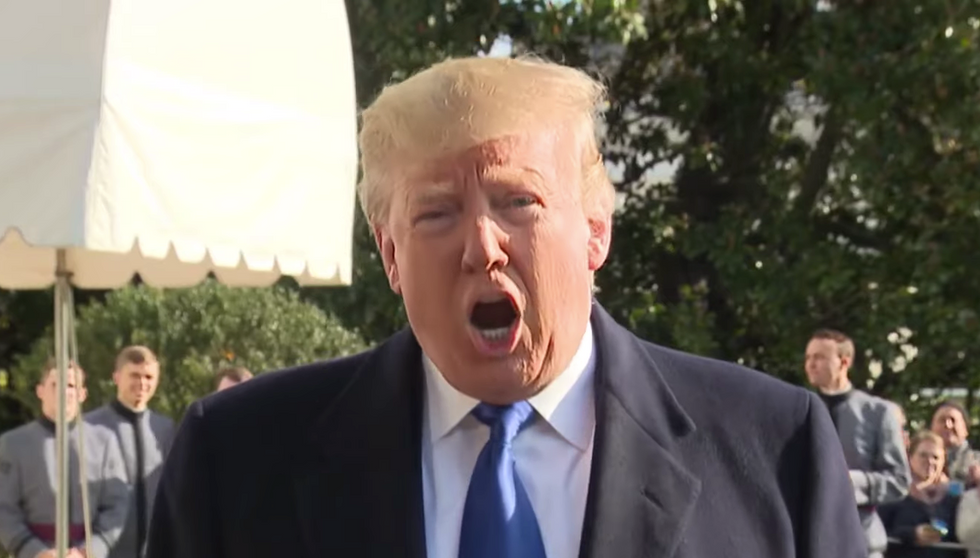 Dear Leader is a stupid, stupid man, but he more than makes up for it by being openly malevolent as well. In yet another tweet-burp after a long and very stressful weekend for Donald Trump, he once again dips into the waters of pandemic insurrection. Spoiler alert: It's because this incompetent, sociopathic, self-obsessed jackass is freaking out about his poll numbers.

The great people of Pennsylvania want their freedom now, and they are fully aware of what that entails. The Democra… https://t.co/yb09Y4DxxA
— Donald J. Trump (@Donald J. Trump)1589207185.0

Trump has been under a considerable amount of stress of late, much of it due to the world's stubborn insistence on not reconfiguring itself to prop up his own malignant narcissism. We learned over the weekend that Trump is "glum" because the death of 80,000 Americans and counting are damaging his poll-measured popularity. He is unnerved and angry that multiple people in the White House have now tested positive for the virus he claims is no longer an issue. He was not even able to go to Camp David this weekend, much less Mar-a-Lago.

As a result, he spent the last two days polluting Twitter with a record number of grievances, complaints, and retweeted praise; for all we know he was hiding in a White House closet with nothing but the light of his smartphone to accompany him.

But the big problem is the poll numbers. As we've consistently seen, Trump has decided that 20,000, 60,000 or 80,000 Americans dying is irritating, but not a deal-breaker. The bigger problem is that we have plummeted into something resembling a Great Depression, and since Trump has tied his whole persona to the supposed Greatness of the economy (it was not a conscious decision, the man simply identifies with money on a more personal basis than he does with people), Trump correctly suspects that being responsible for the collapse of the entire national economy might come back to bite him in the November voting booths.

So that's the reason for the tweet up there. Trump believes that if we open the states while dismissing pandemic dangers—his only gameplan from the pandemic's earliest days—the economy will rebound, only unimportant people will die, and he will be praised as a great hero for killing only a quarter million Americans. Trump further believes that anyone against the idea of killing Americans in larger numbers is, of course, engaged in a political plot against him. He is a malignant narcissist. This is what they do.

Trump's plan, however, will only work if the economy truly does rebound. Experts have been warning that it likely won't if the resulting spike in infections starts killing off people in states and cities where the virus is currently rare and conservative (yes, almost entirely conservative) Americans believe it won't come. It relies on the virus not coming, or on those same Americans being just as indifferent to mass deaths when those deaths are happening in their own towns as they have been to deaths in other people's cities.

And most people, experts suspect, are not as indifferent to friends and family members dying as Donald Trump, decompensating malignant narcissist, believes they are. No matter what state leaders might bluster, even Americans in deep red states aren't itching to risk their lives for Trump's latest delusions.

Trump knows full well how deadly COVID-19 can be, and is also fully behind the idea of testing, contract tracing and isolation when it comes to his own White House. The White House has been bubbling with new protocols after Mike Pence's press secretary and Trump's personal valet tested positive. Not just Trump and Pence are getting tested daily; top aides are now being rigorously tested as well. Trump allegedly now wants his valets to wear masks, after weeks of belittling mask-wearers and discouraging others in his administration from wearing them. And Trump is apparently now getting irritated when other people stand too close to him, signaling that even the idiot manchild knows what death is, and knows that "social distancing" can prevent it.

But that's for him. The rest of America, literally all of it, is on its own because Trump wants to be reelected, believes that he can only be reelected if the economy can somehow be un-collapsed so that we can pretend none of this ever happened. Toward that end, Trump thinks the rest of you need to go out and demand your "freedom," and that you are "fully aware of what that entails"—meaning that quite a few of you will die on his behalf. As "warriors."

There will be no masks provided, mind you. There's no equipment coming. There's no tests coming, unless your particular state finds the resources to put those efforts together itself. There's no nationwide contract tracing plan—again, after earlier Trump bluster he and his aides muddled along incompetently, got nowhere, and then huffily dropped the whole idea as no longer being their problem. Trump might bristle at people getting too close to him in his workplace but what happens to you in your workplace is so irrelevant that both Trump and Senate Republicans are now devoted to passing new law declaring that businesses who expose workers or customers to the virus, perhaps killing them, shall be granted immunity from liability for those deaths.

Trump is in fact headed to Allentown, Pennsylvania, on Thursday. Won't that be fun. Will he demand those that he meets with go out and get themselves some "freedom?" Will he shake their hands when he does it, or stand farther away?