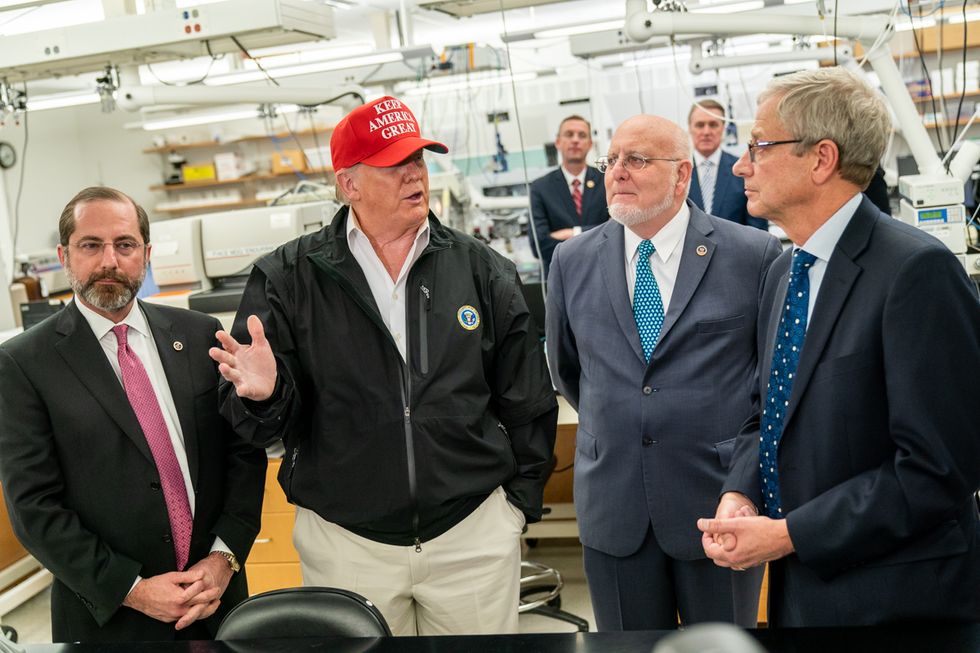 President Donald J. Trump, joined by the Secretary of Health and Human Services Alex Azar, left, Dr. Robert R. Redfield, director of Centers for Disease Control and Prevention and Dr. Stephan Monroe, associate director of the CDC, right, speaks with reporters during a visit to the Centers for Disease Control and Prevention Friday, March 6, 2020, in Atlanta. (Official White House Photo by Shealah Craighead)
Alex Henderson
May 14, 2020

Medical experts at the Centers for Disease Control and Prevention and the Trump White House have expressed different views on how the U.S. can safely reopen during the coronavirus pandemic — and the recommendations offered by the CDC last month were stricter than the Trump Administration’s recommendations. The Associated Press is reporting that Nancy Beck, who Trump has nominated to permanently head the U.S. Consumer Product Safety Commission, played a key role in the “decision to shelve” the CDC’s guidelines on April 30. And Democratic Sen. Maria Cantwell of Washington State is demanding answers.

“I am deeply concerned by the nominee’s involvement in advocating for the deregulation of toxic chemicals known as PFAS, and I also have questions about her potential involvement with the CDC coronavirus guidance,” Cantwell asserted in an official statement.

Beck is a former chemical industry executive, and she has a doctorate in environmental health. However, Beck isn’t a medical doctor and has no experience in virology — unlike Dr. Anthony Fauci or Dr. Deborah Birx, both of whom are part of President Donald Trump’s coronavirus task force.

E-mails obtained by AP, the news agency reports, “show that Beck was the U.S. Centers for Disease Control and Prevention’s main point of contact in the White House about the proposed recommendations. At issue was a 63-page guide created by the CDC that would give community leaders step-by-step instructions for reopening schools, day care centers, restaurants and other facilities.”

According to AP, “Beck’s role in the coronavirus guidance document was revealed in a series of e-mails from late April obtained by AP. On April 10, CDC Director Robert Redfield e-mailed the guidance to a group that included some of the president's closest White House advisers, including Trump son-in-law Jared Kushner, and counselor Kellyanne Conway, and Dr. Anthony Fauci, the government's top infectious disease expert. Redfield wrote that he wanted White House review and clearance to post the documents on the CDC website.”7

In order for Beck to be appointed to head the U.S. Consumer Product Safety Commission permanently, she will have to be confirmed by the U.S. Senate — and Beck is scheduled to appear before the Senate later this month.