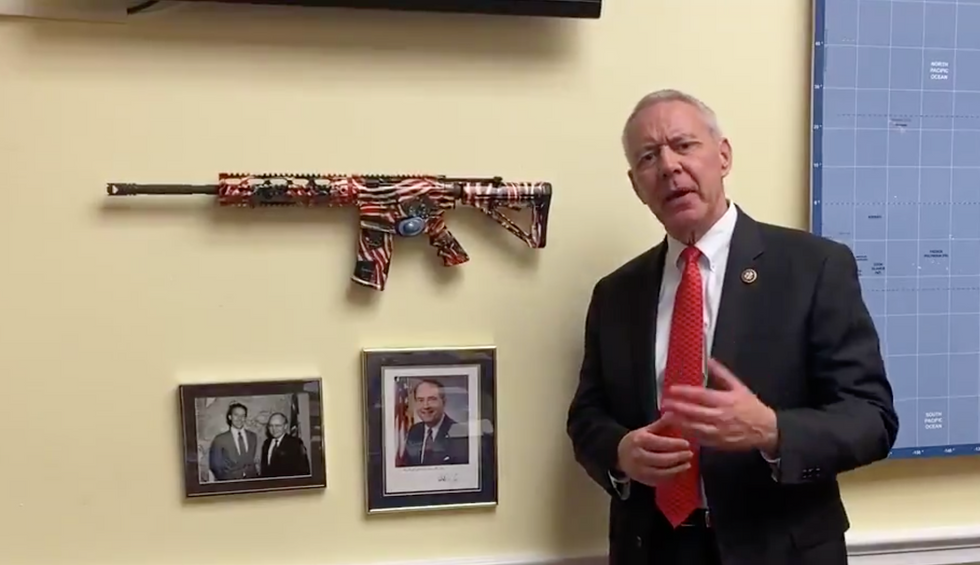 U.S. Rep. Ken Buck, who is also the chairman of the Colorado Republican Party, was captured ordering a local party official to report false election results in a primary race for a state Senate seat in a leaked audio recording released earlier this week.

Eli Bremer, the Republican chairman for state Senate District 10, alleged to The Denver Post that Buck had tried to "bully" him into violating the law.

"You've got a sitting congressman — a sitting state party chair — who is trying to bully a volunteer — I'm a volunteer; I don't get paid for this — into committing a crime," he said. "To say it's damning is an understatement."

Buck told the outlet that he had simply asked Bremer to "abide by a committee decision."

The state Senate Republican primary pitted state Rep. Larry Liston against GOP activist David Stiver. The candidates needed at least 30% of the primary vote in order to qualify for the general election. Liston got 75%, and Stiver received just 24%.

Buck told The Denver Post that Stiver claimed the election was "unfair," and the state central committee agreed. The committee voted to put Stiver on the November ballot, even though he had failed to reach the 30% threshold.

Buck later asked Bremer in a recorded call obtained by The Denver Post if he would comply with the decision. The recording was released Wednesday.

"Do you understand the order of the executive committee and the central committee that you will submit the paperwork to include Mr. Stiver and Mr. Liston on the ballot, with Mr. Liston receiving the top-line vote?" Buck said in the recording.

"Uh, yes, sir. I understand the central committee has adopted a resolution that requires me to sign a false affidavit to the state," Bremer responded.

"I will seek legal counsel, as I am being asked to sign an affidavit that states Mr. Stiver received 30% of the vote," Bremer said. "I need to seek legal counsel to find out if I am putting myself in jeopardy of a misdemeanor for doing that. "

"And you understand that it is the order of the central committee that you do so?" Buck pressed.

"I will consult with counsel. Yes, sir. I understand the central committee has ordered me to sign an affidavit stating that a candidate got 30% who did not," Bremer said. "And I will seek legal counsel and determine if I am legally able to follow that."

Buck, who has repeatedly pushed bogus allegations of voter fraud by Democrats, claimed to The Post that he was not asking Bremer to commit a crime.

Buck argued that the primary, which was held as the coronavirus spread across the state, was "unfair."

Bremer said that he never filed the paperwork but was hit with a "friendly lawsuit" from the district's vice chair three days later that would prevent the office from having to comply with the committee's decision.

District Court Chief Judge Michael Martinez ruled Monday that the request made by Buck and the committee would violate the law, because Stiver failed to reach the legally required threshold. The state's Republican Party sought to appeal the ruling, but the Colorado Supreme Court on Tuesday declined to hear the case.

"There are plenty of examples within Colorado and elsewhere of party leaders pressuring subordinates to sort of fudge results or to change their views on things, but it's very rare you see someone directly ordering someone to commit a crime," Seth Masket, a political science professor at the University of Denver, told The Post. "This is something his colleagues probably don't think highly of — but I can't imagine it's about to flip his district blue or anything like that."

Joe Webb, the former chairman of the Jefferson County Republican Party, which includes District 10, said he was furious at Buck's request.

"Eli was being asked — and this is very serious — to attest to something as true when he knew it was false," Webb said. "There's a word for that in the legal jargon — it's called perjury."

Bremer called for Buck to apologize for allegedly trying to pressure him to violate the law.

"How in the heck is the Republican Party going to go out and say, 'We're for the rule of law except when it applies to us' — we can do whatever we want to?" he said. "That's not my Republican Party."