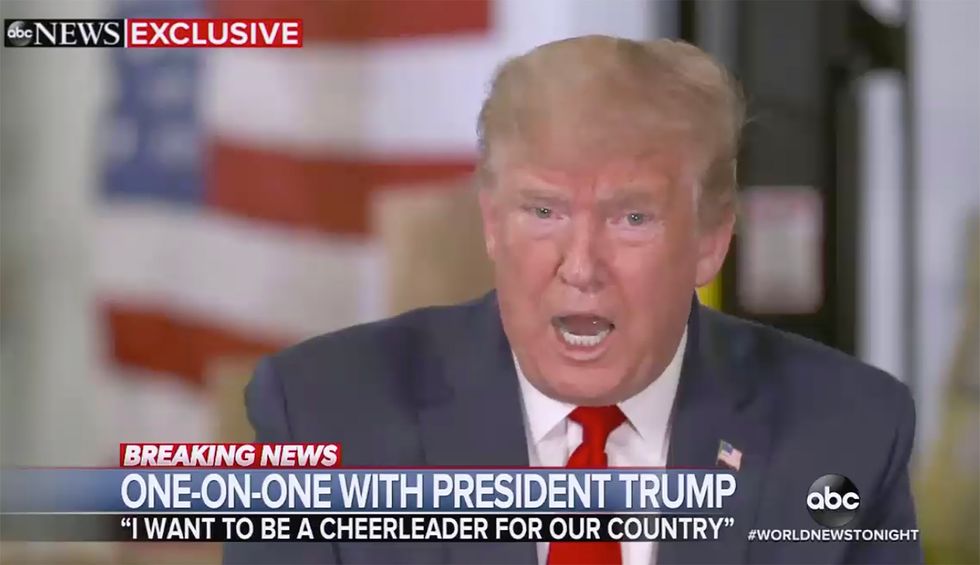 Image via Screengrab
Alex Henderson
May 06, 2020

One of President Donald Trump’s talking points in defense of his initial response to coronavirus has been that no one could have predicted that a crisis of this magnitude would be hitting the United States (although, truth be told, everyone from intel experts to former Vice President Joe Biden to Trump’s economic adviser, Peter Navarro, was sounding the alarm). During an appearance on ABC’s “World News Tonight” earlier this week, Trump asserted that there was reason for optimism back in February — implying that some of the optimism came from Dr. Anthony Fauci and Dr. Deborah Birx. And according to Media Matters, interviewer David Muir should have done a better job calling him out.

This week, Media Matters’ staff posted video of that interview, using the headline, “ABC’s David Muir Allows President Trump to Lie About Dr. Birx and Dr. Fauci Advising in Late February That Coronavirus Would ‘Blow Over.’”

During the interview, Trump claimed that he promoted safety in the U.S. earlier this year by dealing with travel between the U.S. and Mainland China.

Trump told Muir, “Those people went through quarantine, they went through tests, they went through everything, but they were American citizens. I had to let them come back in. But I came in, and what I did is, I said — against many people, including Anthony Fauci, who I like very much, including Deborah, who I like very much, the doctors, and many other people — they said, ‘Don’t ban China, it’s gonna blow over.’ And they said this at the end of February.”

Trump has downplayed predictions from medical experts that a second coronavirus wave in the fall could be even deadlier than the first one, saying that COVID-19 might go away for good this summer. But Fauci has stressed that it is “inevitable” that a second coronavirus wave will attack the U.S. in the fall and the 2020/2021 winter and that the U.S. needs to do everything it can to prepare for it.