'You know you're a fake!': Trump's temper flares when a reporter nails his key coronavirus failure 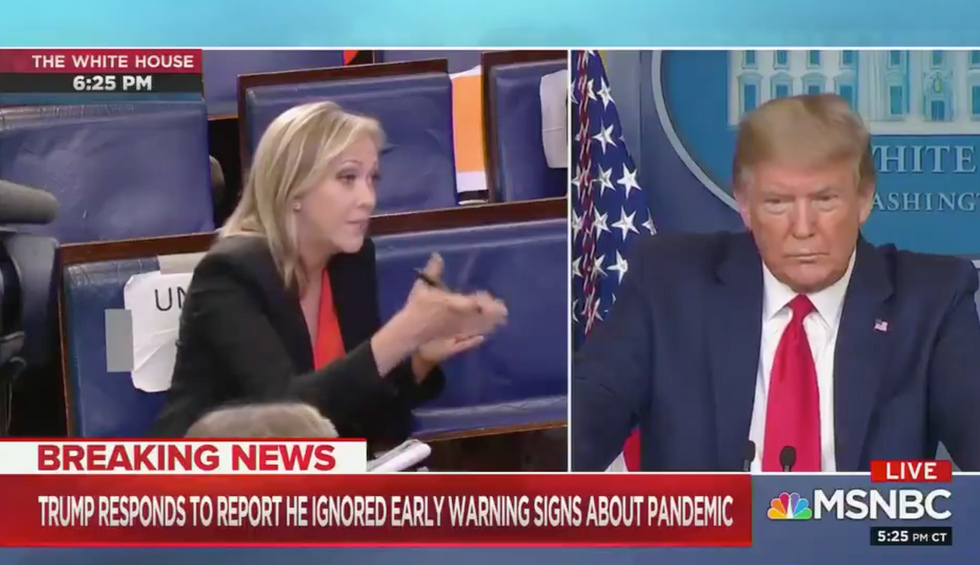 CBS reporter Paula Reid drilled down Monday on one of President Donald Trump's key failures in the response to the coronavirus pandemic, and it clearly touched a nerve.

The moment came during the evening's White House press briefing after Trump played a propaganda-style video touting his supposed efforts to prepare for the virus, including his over-hyped restrictions on travel from China.

But Reid noted there was a crucial gap in the video. It listed nothing done he had during the month of February to prepare for the virus, after the travel restrictions but before there were detections of widespread outbreaks in the United States. The administration could have been building up capacity to treat and detect the disease, or perhaps manufacturing enough personal protective equipment for health care workers who are now in desperate need. But little progress was made, and essentially an entire month was wasted.

"What did you do with the time you bought?" she asked. "The entire month of February?"

"What do you do when you have no case in the whole United States —" Trump began.

"You had cases in February," she corrected him.

"The entire month of Feburary —"

"Your video has a complete gap. What did your administration do in February with the time your travel ban bought you?" she asked again.

"Look! Look! You know you're a fake!" Trump said, now clearly cornered and furious at the reporter. "You know that. Your whole network, the way you cover it, is fake."