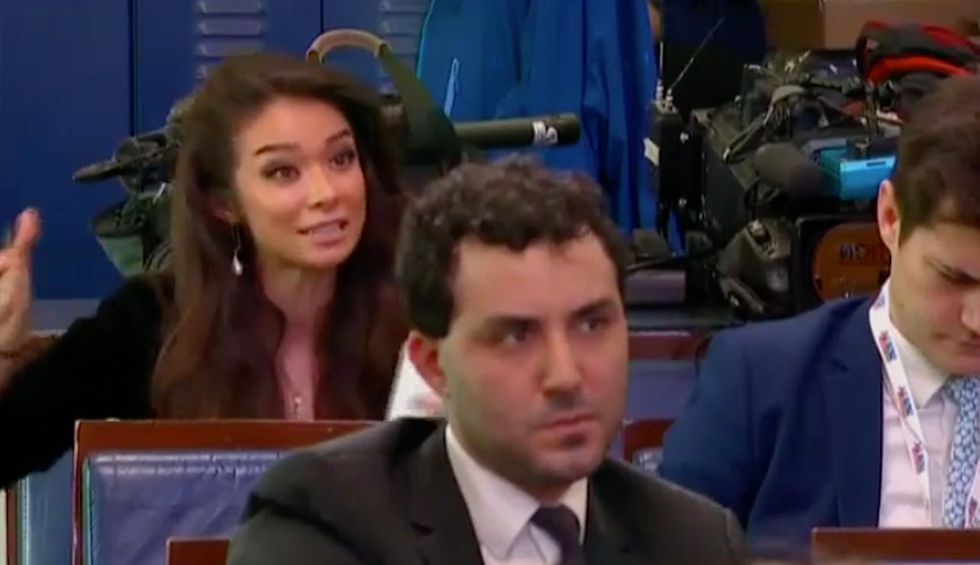 One America News correspondent Chanel Rion saw her profile rise after she was briefly banished last week from the White House briefing room but invited back by since-ousted press secretary Stephanie Grisham, and the Daily Mail took a deep dive into the reporter’s past.

The 29-year-old had been banned from the daily coronavirus briefings for ignoring social distancing guidelines, but Grisham asked her back shortly before the press secretary was ousted herself.

Rion also made news during the impeachment saga, when she flew to Europe and Ukraine with the president’s personal attorney Rudy Giuliani to produce a documentary intended to show Trump was the victim of a corrupt conspiracy to remove him.

She was born in 1990 as Chanel Nmi Dayn-Ryan to a South Korean mother and a property developer father Dan Dayn-Ryan — who was born Danny Preboth but assumed multiple identities over a career that’s gotten him sued dozens of times for fraud.

Her father was involved in at least 31 companies sued in Harris County, Texas, in the 1990s for fraud involving apartment buildings and other real estate deals, and one plaintiff complained that Ryan offered to act as their attorney during one sale despite not having a law license.

Rion filed to change her last name last year in Massachusetts, the same year she applied for security clearance for her White House press pass, but says she has used the alternate spelling of her last name since age six and that spelling is used on her passport and other documents.

She spent five years at the Harvard Extension School, a separate organization from the university that offers non-degree programs with far less rigorous or competitive entry requirements.

Rion claims to have worked as art director and principal illustrator for Cloverstone Publishing, founded by her sister Channing, and lists her post-graduate employment as political illustrator for her self-published Left Edge website.

Her illustrations, which don’t appear to have earned any income, depict the Pizzagate conspiracy and philanthropist George Soros, and she claims to have produced illustrations for Trump and his family.

She’s engaged to Bobby Courtland Sykes, who ran unsuccessfully for the U.S. Senate in 2018 and gained notoriety for attacking feminists as “she devils” and insisted his fiancée have dinner ready for him every night at 6 p.m.

“I consider cooking my job even if I have a career,” Rion told the Daily Mail, “and even if crazy feminists think I shouldn’t.”

The couple frequently post photos of themselves on social media, where they claim to have met during her final year at Harvard as he was taking a non-degree course at the Extension School.

Sykes claims to have served as an intelligence specialist in the U.S. Navy, but photographs of his uniform and medals posted on Facebook show his rank as petty officer first class, and his medals do not appear to back his claim to have served in a combat zone.

Their social media accounts are filled with dozens of photos showing the couple traveling around the U.S., including some shots that suggest they’re helping with Republican Party campaigns.

They attended Trump’s inauguration in January 2017, according to social media photos, and Rion posted photos of a party at the president’s Mar-A-Lago resort in December.

She explained her apparently luxurious lifestyle to the Daily Mail by claiming to have an eye for bargains.

“Everybody in America wears designer clothing, stays in hotels and may sometimes water ski,” Rion said. “I shop for bargains just like everyone else and look as good as I can with the choices I make.”