When stupid people think they're smart, they do maximum damage. That's where we are with Trump and this pandemic 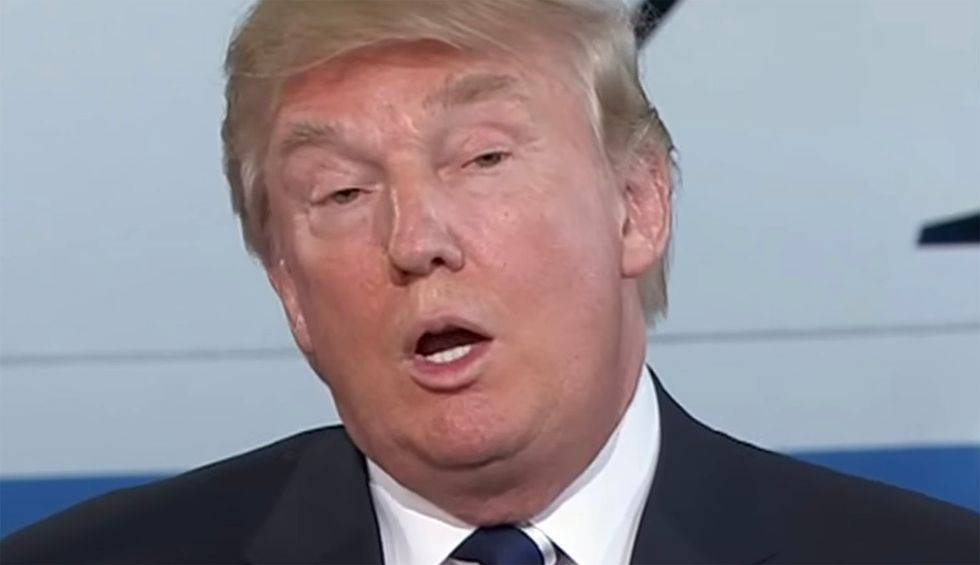 The Dunning-Kruger effect is a term that describes a psychological phenomenon in which stupid people do not know that they are in fact stupid.

Writing at Pacific Standard, psychologist David Dunning — one of the social psychologists who first documented this type of cognitive bias — describes it in more detail:

In many areas of life, incompetent people do not recognize  —  scratch that, cannot recognize  —  just how incompetent they are, a phenomenon that has come to be known as the Dunning-Kruger effect. Logic itself almost demands this lack of self-insight: For poor performers to recognize their ineptitude would require them to possess the very expertise they lack. To know how skilled or unskilled you are at using the rules of grammar, for instance, you must have a good working knowledge of those rules, an impossibility among the incompetent. Poor performers  —  and we are all poor performers at some things  —  fail to see the flaws in their thinking or the answers they lack. What's curious is that, in many cases, incompetence does not leave people disoriented, perplexed, or cautious. Instead, the incompetent are often blessed with an inappropriate confidence, buoyed by something that feels to them like knowledge.

The Dunning-Kruger effect manifests in the form of the drunk at the bar who weighs in on every conversation with unwanted advice, the online troll who monopolizes comment sections, or the person who reads one book (or perhaps the introduction) and then acts like an authority on the subject.

Visionary science-fiction writer Isaac Asimov signaled to the Dunning-Kruger effect with his famous observation in 1980: "There is a cult of ignorance in the United States, and there has always been. The strain of anti-intellectualism has been a constant thread winding its way through our political and cultural life, nurtured by the false notion that democracy means that 'my ignorance is just as good as your knowledge.'"

Donald Trump is the Dunning-Kruger president of the United States.

But he is also something much worse than that. Donald Trump is an almost perfect living, breathing example of the Dunning-Kruger effect: a president in a time of plague whose ignorance and stupidity are amplified through apparent and obvious mental illness as well as cruelty, compulsive lying, grand immorality, corruption and evil.

Americans have already died because of Trump's false claims about the novel coronavirus pandemic. Many more will die in the weeks and months ahead.

At Tuesday's coronavirus White House "briefing" (another version of Trump's ego-stroking carnival political rallies) he made another "expert" suggestion about how to defeat the novel coronavirus pandemic: Wear scarves instead of masks for protection.

In fact, scarves offer no protection against the coronavirus.

Several weeks ago, Donald Trump visited the headquarters of the Centers for Disease Control where he made this astonishing claim:

You know, my uncle was a great person. He was at MIT. He taught at MIT for, I think, like a record number of years. He was a great super genius. Dr. John Trump. I like this stuff. I really get it. People are surprised that I understand it. Every one of these doctors said, 'How do you know so much about this? ' Maybe I have a natural ability. Maybe I should have done that instead of running for president.

Apparently, Trump believes he knows more than some of the best trained and experienced doctors and medical researchers in the world.

Trump also believes himself to be an expert on the types of medical equipment needed to fight the novel coronavirus. He has suggested that governors in New York, New Jersey, Michigan and elsewhere are intentionally exaggerating the number of ventilators needed in hospitals to care for victims of the pandemic.

On multiple occasions, Donald Trump has claimed that there is no ventilator shortage in New York. According to him, ventilators and other medical equipment being stolen by doctors, nurses and other medical staff who are selling them, bringing them home for personal use or perhaps even hoarding the equipment in private.

Donald Trump claims to have magical powers. He has repeatedly said that the novel coronavirus will disappear at some future date which only he can predict.

Trump has said he was the first person to label the novel coronavirus a "pandemic." And because he believes himself to be an expert on all things, Trump can pivot without pause, apprehension or doubt from claiming that the novel coronavirus was a "hoax" to embracing the view that it is a dire threat that could kill hundreds of thousands if not millions of Americans.

Medical professionals know what the novel coronavirus is and have been warning the Trump administration about the threat for months.

Most likely for partisan reasons and also because of racism (Trump's immense disdain for Barack Obama), Trump's administration also ignored the step-by-step suggestions for fighting a pandemic outlined by the National Security Council in 2016.

Donald Trump has evidently made decisions about which Americans should live and which should die based on their perceived partisan loyalty.

The Dunning-Kruger president is an expert in so many things that it is difficult to keep track of them all. Writing at MSNBC, Steven Benen made a valiant effort at cataloguing Trump's claims to preternatural expertise:

About a year ago, for example, Trump was reflecting on technology measures that have been deployed along the U.S./Mexico border, and he assured the public, "I'm a professional at technology."

What kind of technology? He didn't say, but we can probably assume he meant every possible kind.

As we discussed at the time, Trump has also claimed to be the world's foremost authority on everything from terrorism to campaign finance, the judicial system to infrastructure, trade to renewable energy. NowThis prepared a video montage on the subject a while back, and it was amazing to see the many subjects on which the president considers himself a world-class expert.

A belief in their inherent intelligence and great skill in all things is a common trait among authoritarians and other demagogues such as Donald Trump. North Korean leader Kim Jong-un, according to national legend, could shoot guns better than a trained sniper at age three. At age eight, he was a daredevil truck driver. Adolf Hitler and his acolytes also made claims to greatness and superhuman abilities.

Trump's embrace of stupidity and ignorance reflects much deeper problems in the United States generally, and the Republican Party and the conservative movement in particular.

Today's Republican Party and conservative movement possess a deep disdain and hostility towards true experts and qualified, proven professionals. Such people are slurred as being "elitists" or not "real Americans," and are suspected of being liberal Democrats who belong to a "deep state" cabal working against Donald Trump and his army of real Americans, with the goal of enslaving them to "political correctness."

Many of Trump's strongest supporters are Christian nationalists who aim to overturn the Constitution and destroy secular, science-based, empirical reality and society. Such people believe in magic, and are the most stalwart, influential and loyal members of Trump's political death cult.

Historian and political scientist Richard Hofstadter famously warned that Republicans and other conservatives had succumbed to the allure and power of anti-intellectualism. Hofstadter's "Anti-Intellectualism in American Life" was written in 1963.

Writing in 1947, Albert Camus reflected on Nazism and authoritarianism through the metaphor of misery and suffering caused by a plague:

The evil in the world comes almost always from ignorance, and goodwill can cause as much damage as ill-will if it is not enlightened. People are more often good than bad, though in fact that is not the question. But they are more or less ignorant and this is what one calls vice or virtue, the most appalling vice being the ignorance that thinks it knows everything and which consequently authorizes itself to kill. The murderer's soul is blind, and there is no true goodness or fine love without the greatest possible degree of clear-sightedness.

Some 70 years later, Camus' warnings resonate in the age of Donald Trump.

People such as Donald Trump are all too common among humanity. Unfortunately, some of them rise to great prominence during the most dangerous and troubled times — times when their ignorance and hubris has the power to kill hundreds, thousands or even millions of people. Such a time is now.