‘We are on our own’: Columnist warns that the US can forget about competent leadership from Trump 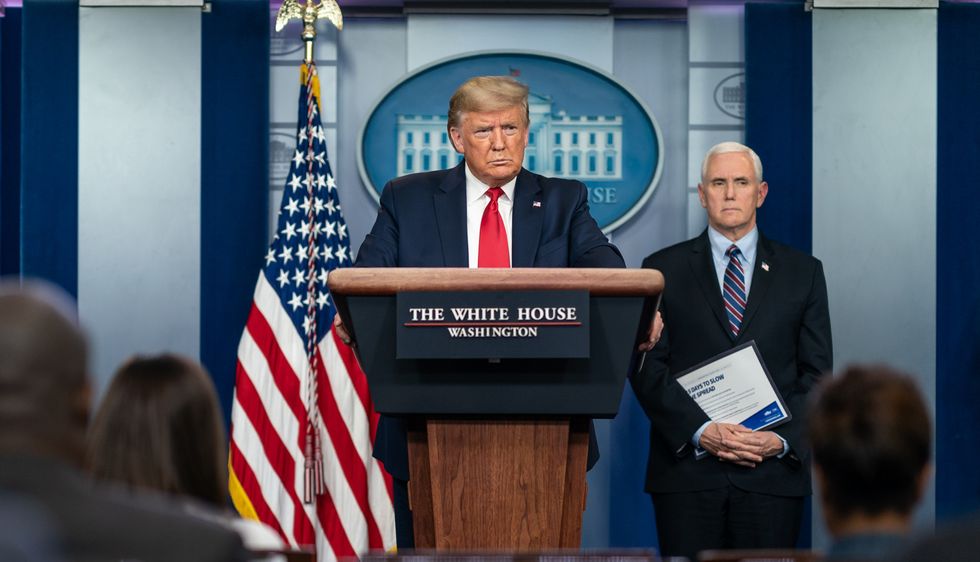 Liberal Washington Post columnist Eugene Robinson has been a persistent critic of Donald Trump’s presidency, often denouncing him as both incompetent and corrupt. But in 2017, 2018 and 2019, at least Robinson took some comfort in knowing that Trump had yet to be confronted by a major crisis. That has changed in a huge way with the coronavirus pandemic, which according to researchers at John Hopkins University in Baltimore, has killed more than 146,000 people worldwide (as of early Friday morning, April 17). And this week in his column, Robinson warns that Trump’s incompetence remains while the death toll from coronavirus continues to surge.

“For three years, we were lucky,” Robinson explains. “We made it through most of President Trump’s term in office without facing a crisis that required great presidential leadership. Now, our luck has run out, and we are on our own.”

Presidents of the past, Robinson recalls, rose to the occasion when confronted by a major crisis — whereas Trump has failed miserably.

“It is difficult to overstate the scope of the challenge that COVID-19 presents to the nation and the world — or the tragic inadequacy of Trump and his administration,” Robinson laments. “Sometimes, an underestimated president improbably rises to meet the moment: think of Harry S. Truman rebuilding a free and peaceful Europe after World War II, or George W. Bush rallying the nation with his bullhorn in the ruins of the World Trade Center. But Trump has become smaller, pettier, more self-absorbed. He failed.”

“Private companies, universities and government scientists have quickly developed an array of tests,” Robinson notes. “Trump should use his powers under the Defense Production Act to mandate production of enough test kits — and the build-out of enough laboratory capacity to process all those tests promptly — to make it possible for every American to be tested periodically. That information would allow the nation to function at some reasonable level for the 12 to 18 months until, hopefully, we have an effective vaccine.”

Because Trump has handled the coronavirus crisis so badly, Robinson observes, Democratic governors are doing their best to “fill the vacuum.”

“Gov. Andrew M. Cuomo (D) of New York, whose state is the epicenter of infection in this country, has displayed steady leadership and continues to give must-see daily briefings that provide not just solid information, but also, a welcome measure of comfort,” Robinson notes. “Govs. Jay Inslee of Washington and Gavin Newsom of California, both Democrats, reacted to COVID-19 with early stay-at-home orders that kept infections, hospitalizations and deaths in their states relatively low.”

Robinson ends his column on a patriotic and somewhat optimistic note, asserting that determined Americans will continue to do everything they can to ultimately defeat COVID-19 — but Trump, he laments, won’t be one of them.

“We will win this war because we must,” Robinson declares. “But victory won’t come because of Trump; it will come in spite of him.”