Trump's coronavirus predictions are based on lousy data 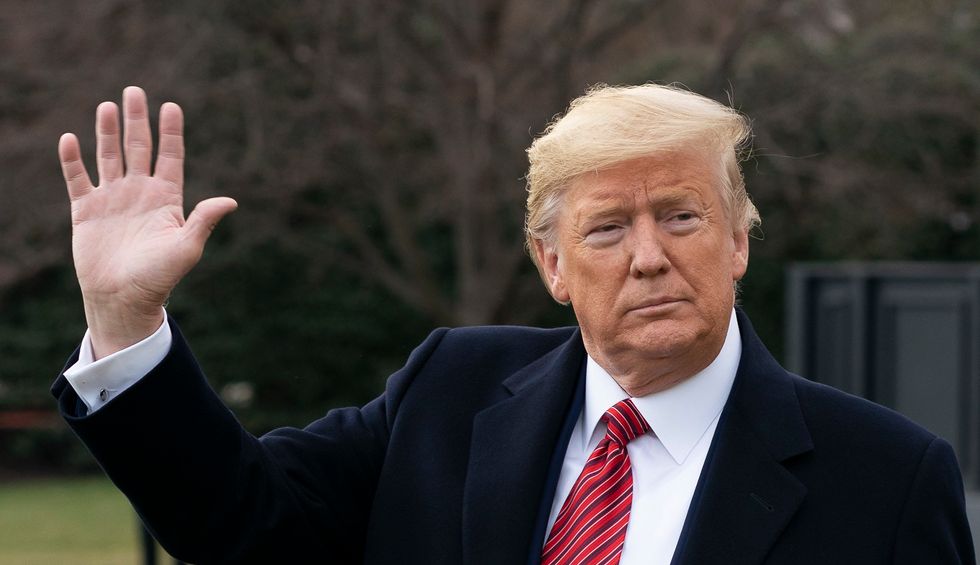 President Donald J. Trump waves as he walks across the South Lawn of the White House Friday, Feb. 28, 2020, to board Marine One to begin his trip to South Carolina. (Official White House Photo by Joyce N. Boghosian)
Mark Sumner
and
Daily Kos
April 29, 2020 News & Politics

On March 31, Donald Trump appeared in front of a graph that projected the potential number of deaths in the United States from COVID-19. For Trump, who has been to this point universally dismissive of the virus, that particular meeting represented yet another of those points where the media declared that “he got it.” Rather than repeating, as he had done multiple times before, that the coronavirus was no worse than the flu, or explaining how it would vanish with the spring, Trump plodded through a terrifyingly downbeat presentation that included a prediction of at least 100,000 deaths. And then, as would become the case going forward, began the case for how 100,000 dead Americans was a good thing. 100,000 mean they had done “a tremendous job.”

The chart behind Trump was based on predictions from University of Washington’s Institute for Health Metrics and Evaluation. So, after a weekend when Vice President Mike Pence, Secretary of State Mike Pompeo, and White House counselor Kellyanne Conway all made appearances to explain how even the upper bounds of 240,000 dead wasn’t all that bad, the whole Trump team was ecstatic a week later when the IHME model was adjusted, bringing its predicted number of deaths down to 60,415 by August 4. It was an occasion for a victory lap as Trump and his surrogates treated the revised number as if he had taken some decisive action to move the needle. It’s also a number that was passed on Wednesday morning.

The IHME projection has been updated several times since that drop to 60,000. The numbers have dipped as low as 47,000 and been as high as 80,000. On Wednesday, the projections for August stand at 72,860 after an update on Tuesday morning.

However, this is the way those projections looked when Trump stepped out to brag about the great job he was doing and the many, many lives he was saving.

But on Wednesday afternoon, as the first states began reporting in for the day, the United States reached 1,048,834 confirmed cases and 60,495 deaths. This doesn’t just exceed the projections made at the first of the month—it exceeds the numbers projected as recently as 10 days ago. In fact, less than two days since the last update, the projections from IHME are once again 2,000 short.

That’s because, as we’ve covered before, the numbers being kicked out by the IHME aren’t a serious epidemiological model. They’re an attempt to take the curve generated by the rise and decline of cases in the Hubei region of China and drape that form over other data sets. In practice, that has proved not only problematic but pointless. When it comes to looking even a few days out, much less all the way to August, the IHME model has proven to be exceedingly inaccurate, and although the team behind this projection have regularly fed it new data and tweaked its parameters, it still hasn’t demonstrated an ability to look even a few days ahead, much less months.

So where is the best place to turn for accurate predictions of how the epidemic is going to turn out in America? Nowhere, really. With governors determined to make deadly choices and Trump firing off policies that have a lifespan shorter than a press conference, it’s impossible to generate an accurate model.

But people are trying. For example, there’s a new model from Johns Hopkins ID Dynamics COVID-19 working group that uses county-level data and a combination of two well-reputed epidemiological models overlaid with adjustments made with each shift in policy. Sounds good, right? Let’s hope not, because that model calls for 100,000 deaths in the next three weeks. Not for deaths to reach 100,000, but 100,000 additional deaths.

At the other end of the world, the IHME model is calling for just 7,000 more in the next three weeks. This sounds extremely unlikely, but it’s just another example of how the IHME model keeps trying to push everything into the shape of a wave that’s as steep in decline as it was going up.

In between these two extremes are a whole range of other models. At this point, there are literally dozens. Reich Labs also keeps a kind of model of models, the COVID forecast hub ensemble projection, on its presentation page. That projection calls for about 90,000 cases at the end of three weeks, which is certainly horrible, though not as bad as some.

In any case, there are three takeaways from this: