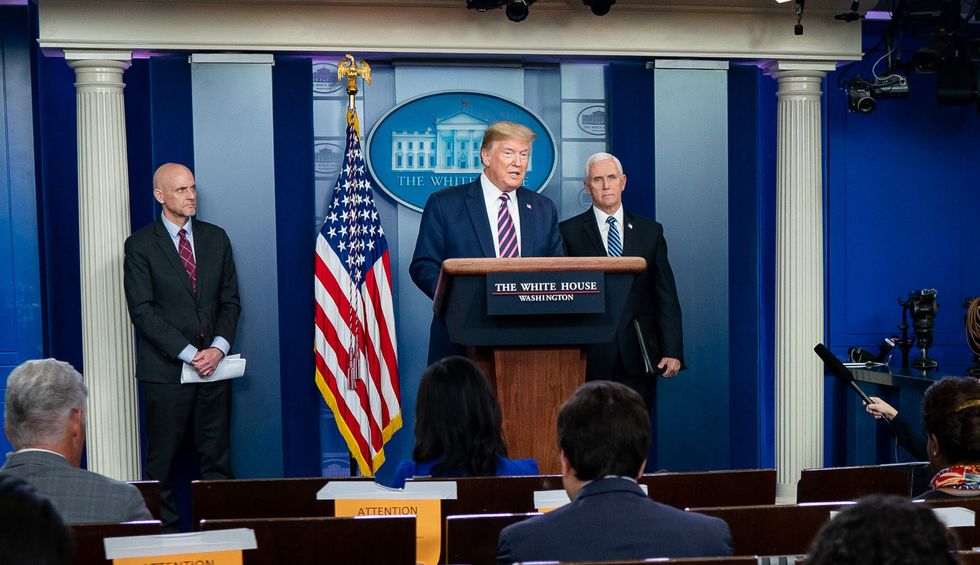 President Donald Trump on Tuesday expressed opposition to providing additional direct relief payments on top of the $1,200 checks that are slowly trickling out to eligible U.S. households, saying he would instead prefer to slash the tax that funds Social Security and Medicare.

"Well, I like the idea of payroll tax cuts," Trump said at a press conference when asked about the idea of authorizing another round of direct payments in the next coronavirus stimulus package as mass layoffs continue.

"I've liked that from the beginning," the president said. "That was a thing that I really would love to see happen. A lot of economists would agree with me. A lot of people agree with me. And I think frankly it's simple, it's not the big distribution, and it would really be an incentive for people to come back to work and for employers to hire."

Trump has floated the idea of a payroll tax cut several times in recent weeks—suggesting at one point earlier this month that the cut should be permanent—even though the move would not provide any relief for the tens of millions of people who have lost their jobs since mid-March.

"Economists don't actually agree with him," said Justin Wolfers, economics professor at the University of Michigan. "Payroll tax cuts are too slow and poorly targeted."

But a payroll tax cut would advance a longstanding objective of the conservative movement by striking a blow to Social Security and Medicare funding, advocacy groups pointed out. The CARES Act, which Trump signed into law last month, contained a little-noticed provision allowing employers to delay payment of the payroll tax for at least the rest of 2020.

"Unlike additional stimulus checks, cutting payroll taxes does nothing to help seniors or the millions of people who just lost their jobs," tweeted Social Security Works. "It does, however, defund Social Security and Medicare—which is why Trump is obsessed with the idea."

The president's opposition to additional direct payments comes as progressive lawmakers and activists are pushing for $2,000 monthly payments to all U.S. households for the duration of the Covid-19 crisis because the initial $1,200—for those lucky enough to have received it—was far from sufficient to cover basic expenses.

"Pathetic," Sen. Bernie Sanders (I-Vt.) said in response to Trump's remarks. "A payroll tax cut does nothing for the 26 million who lost their jobs. With rent due on May 1, we need to provide $2,000 a month to everyone until this crisis is over. If we can bail out corporations, we can make sure everyone has enough to pay for basic necessities."