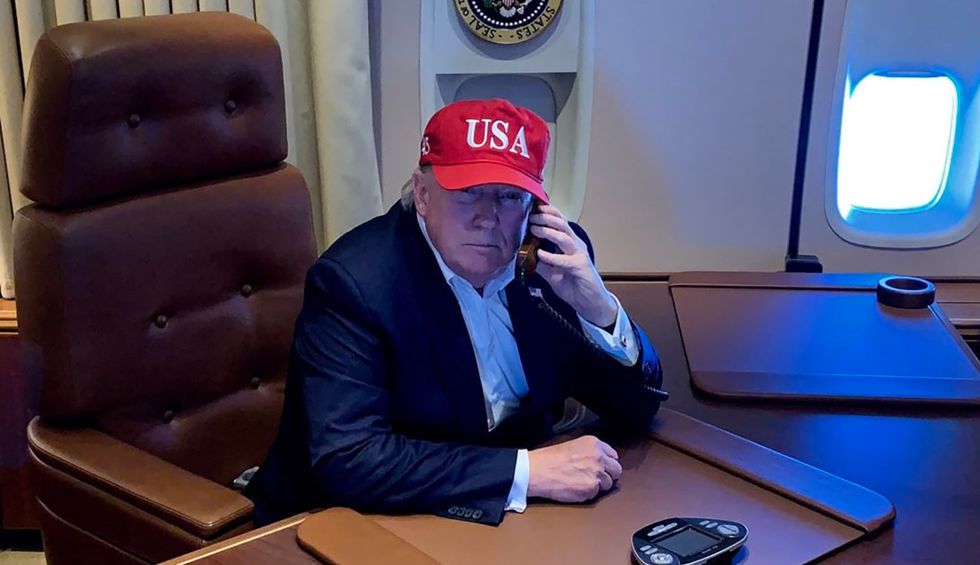 It's Saturday and time, once again, for the regularly scheduled Donald Trump Twitter Tantrum. The Tweeter-in-Chief didn't disappoint his glassy-eyed disciples this weekend. He blasted out 48 tweets before mid-afternoon, 29 of which were retweets devoted to falsely accusing Democrats of blocking new funding for small businesses. As is often the case, Trump is just venting because he's utterly incapable of accomplishing anything via reasoned persuasion or bipartisan compromise the way an intelligent, experienced president would.

In fact, it's the Republicans who are living up to their reputation for callous indifference to the needs of the people by refusing to negotiate over including funds for hospitals and workers. Trump's four dozen tweets were somehow pounded out while he says he was "Spending the morning speaking to @fema and Military relative to CoronaVirus. Also, spoke to leaders of various countries including Poland, South Korea and Bahrain." They must have been brief conversations, because he was simultaneously suffering a hemorrhage of media madness. He began with a typical lament that members of Congress were not being sufficiently grateful for the generosity he shows them by pretending to do his job:

So Trump is once again upset that Congress and the press have failed to genuflect before his majesty and "total authority." His Tweet thread continued with a complaint on behalf of Vice-President Pence, who Trump says spoke with Democratic Senators and "gave them everything that they would have wanted." Now really, what's the likelihood of that being true?

Trump concluded that "nothing that anyone could have said ... could make [the Democrats] happy." Then he accused them of being "RUDE and NASTY." Which seems improbable considering that's the standard emotional status of Trump himself. What's more, he said that this was the Democrats' "political playbook" that they intended to use "right up to the election on November 3rd," because "they feel that this is the only way they can win," and that "America will not be fooled!!!" (Trump's exclamation points). In other words, history's most bitterly partisan White House occupant is accusing others of being partisan, albeit with zero evidence other than his petulant whining. However, he's right that most Americans will not be fooled, which is precisely why he's so scared.

Trump capped his rage-ranting with a post that rehashed his familiar and false blathering about the media's use of unidentified sources and “officials who spoke on the condition of anonymity.” Never mind that his own White House communications Office regularly gives "background briefings" that prohibit reporters from attributing the comments to anyone but "senior administration officials." It's also notable that no one uses anonymous sources more than Trump, who is constantly claiming that “some people say” some ludicrous things that support whatever lie he's in the midst of telling.

Trump's harangue goes on to assert that the media will "make up a phony quote from a person who doesn’t even exist," and that "The American people should demand NAMES!" Of course, Trump has never been able to document a single case of a non-existent source. To the contrary, he frequently threatens to uncover the "leaker," which is an admission that one exists and is telling the truth. Otherwise, why would he bother to investigate?

As for the American people demanding names, Trump is wailing impotently into the void. The American people are satisfied that the media is doing its job. They understand that the use of unidentified sources is a long established and necessary means of acquiring inside information that politicians often want to keep concealed. And polls show that people trust the media more than they trust Trump.

Even so, Trump's desire for a public demand for named sources is less objectionable than one he floated last month when he proposed that the media be forced to reveal their sources. That's a flagrantly unconstitutional proposal and an assault on the free press. But it isn't surprising coming from Trump who frequently refers to the media in Stalinist terms as "the enemy of the people." Talk about rude and nasty.