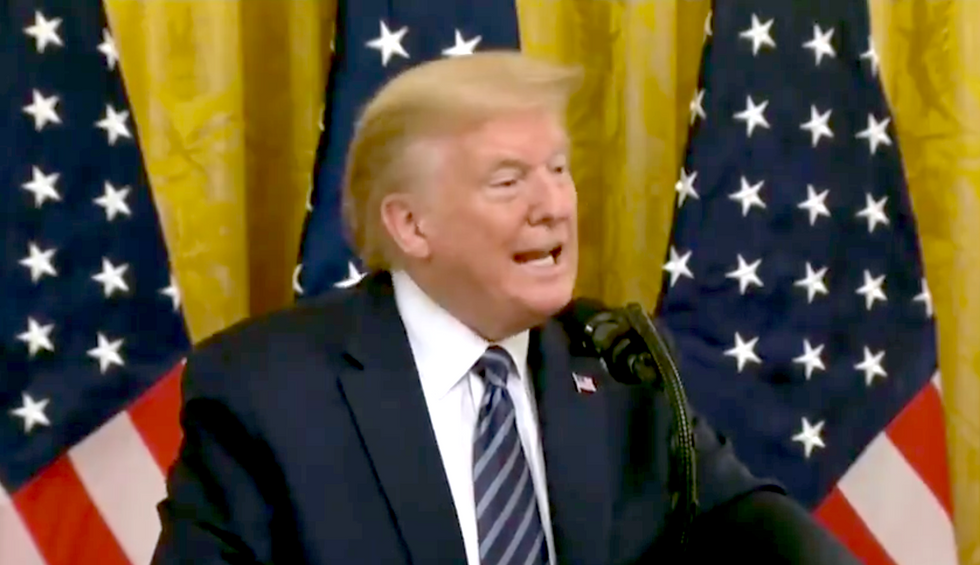 With thousands of Americans dying each day from the coronavirus pandemic, many critics of President Donald Trump have argued that he has failed to show significant empathy and concern for the tragic consequences of the outbreak. Instead, he has routinely touted his own performance, downplayed the significance of the virus, spread misinformation, and lashed out at his perceived enemies.

But on Thursday, when pressed by NBC News' Kristen Welker, the president tried to express his empathy for the victims of the disease. Yet as the words worked their way from his brain to his mouth, any inkling of genuine concern that might have been there from the start was wiped out. What emerged was merely Trumpian boasting in the thin guise of an expression of feeling.

"I don't think anybody could feel any worse than I do about all of the death and destruction that is so needless," he said. "Nobody."

He continued: "But I also have to make sure that we handle the situation well. Nobody's thinking about it more. Nobody, uh, nobody has spent more time late in the evening thinking about what's happened to this country in a short period of time. But at the same time, we've got to get our country open again. And we're doing that."

It's remarkable that, even when given the opportunity to reflect on the lives lost, the president felt the need to make caring about the dead and dying into a competition in which he was the winner. His voice showed no signs genuine emotion, and his claim that he spends much time thinking about the crisis is hard to swallow, given that his Twitter posts — the best window into his mind that exists — reveal he's preoccupied with other matters. And even in his answer, he quickly pivoted back to focus on the economy.

TRUMP: "I don't think anybody could feel any worse than I do about all of the death and destruction that is so need… https://t.co/myvQVbuBaA
— Aaron Rupar (@Aaron Rupar)1588281793.0