Trump has a small personal financial interest in company that makes brand-name version of hydroxychloroquine: NYT 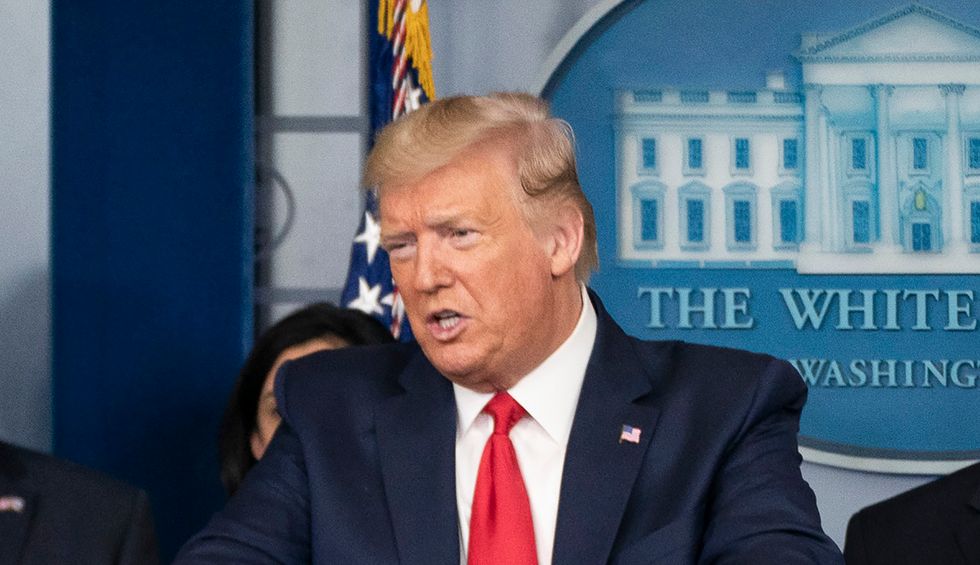 As Donald Trump uses his daily coronavirus task force briefings as substitute campaign rallies, he continues to hype the antimalarial drug hydroxychloroquine for patients suffering from COVID-19, an unproven treatment that cardiologists warn increases the risk of cardiac arrest.

According to Axios, the president’s push of the antimalarial drug hydroxychloroquine even resulted in an “epic Situation Room showdown” on Saturday as Trump and trade advisor Peter Navarro championed what the president believes could be a “game-changer” in the fight against the coronavirus. During that “showdown, Dr. Anthony Fauci, the director of the National Institute of Allergy and Infectious Diseases, noted “there was only anecdotal evidence that hydroxychloroquine works against the coronavirus,” resulting in a “confrontation” between Navarro and the nation’s leading doctor.

The battle over hydroxychloroquine spilled out in public on Sunday when Trump, at a press briefing, refused to let Fauci answer a question about the drug. During that same presser, Trump announced he has 29 million doses of hydroxychloroquine in the Strategic National Stockpile.

But there could also be another reason why Trump is leaning heavily on an unproven coronavirus treatment that, as he himself acknowledged, can have a negative impact on “the heart stuff.”

Per the Times: “Mr. Trump himself has a small personal financial interest in Sanofi, the French drugmaker that makes Plaquenil, the brand-name version of hydroxychloroquine.”

HYDROXYCHLOROQUINE & AZITHROMYCIN, taken together, have a real chance to be one of the biggest game changers in the… https://t.co/0ZEF0mdfJg
— Donald J. Trump (@Donald J. Trump) 1584799988.0

Navarro, who warned Trump in late January that more than a half-million Americans could die from coronavirus, was asked about his Situation Room battle with Fauci on CNN Monday. Pressed on what qualifies him to hype hydroxychloroquine as a possible COVID-19 treatment, Navarro cited his credentials as a social scientist.

“I have a Ph.D. And I understand how to read statistical studies, whether it’s in medicine, the law, economics or whatever,” Navarro said.

And while Fauci told Fox News on Friday that “we still need to do the kinds of studies that definitively prove whether any intervention, not just this one, any intervention is truly safe and effective,” the president is making clear he’s ready to go all-in on hydroxychloroquine.

Time is money, after all.